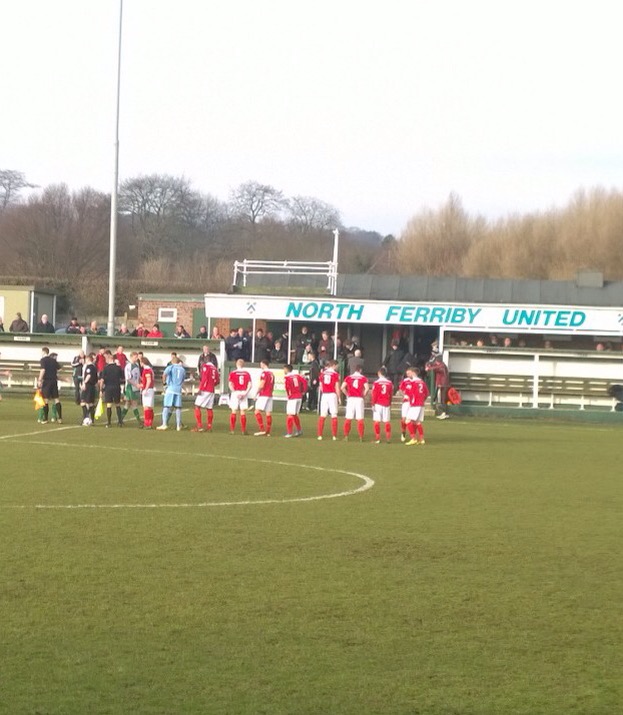 Fleet’s dreams of Wembley were shattered four minutes from time in East Yorkshire as Kenny Clarke’s red card handed the home side a penalty that they duly converted to send North Ferriby into their first semi-final.

Jamie Day handed Ben Jefford his debut while Mark Gower was on the bench and Jefford had a testing time early on as the home side quickly set about their task, pushing Fleet into the final third.

Matt Fish had to be alert to the threat of St Juste for the Villagers who got crosses in on several occasions, wrong-footing Fleet defenders with his turn of pace and he ran on to a ball over the top and through on goal only for Fish to tackle by his own goalpost.

The Fleet full back almost got in a tangle with his own goalkeeper minutes later when the two collided and the ball ran free but North Ferriby were wasteful and fired wide.

The Fleet started to find their feet and Danny Kedwell twice had chances, first heading into the goalkeeper’s arms and then seeing a clearance ricochet off him and fly across goal with the home defence at sixes and sevens.

Another useful move from North Ferriby had the ball in the Fleet goal, St Juste again creating the opening, but the flag was up immediately for offside.

At the other end, Kelvin Langmead seemed certain to open his account with a header that was somehow kept out by the foot of the post, while Theo Lewis lacked the power to do anything more than dive with a weak header at Kedwell’s cross.

Fleet lost Anthony Acheampong to a head injury, to be replaced by Dean Pooley, and the home side continued to enjoy too much possession. St Juste made another decent run and Edwards had to punch that one clear with the visitors surrendering too many corners for comfort.

With the Fleet struggling to clear their lines, the home midfield was constantly encouraged forward and there was constant pressure on Clark and Langmead, especially with the aerial threat of the tall Tom Denton.

The second half saw the Fleet improve and it was a tale of the woodwork as both sides saw efforts come back off the posts. The visitors did it first when a Pooley free kick was flicked on by Cunnington, misjudged by a defender who sent the ball looping over his own goalkeeper, both of them desperately chasing back as it bounced back off the post.

Langmead could have opened the scoring a minute later when a cross fell nicely at his feet 10 yards out but though his effort was on target, the goalkeeper was equal to it.

North Ferriby then hit the upright direct from a corner before Kedwell laid off a ball for Cunnington to let fly with a shot that cracked off the underside of the bar, hit the line and then bounced to safety.

The home side took their turn with the woodwork when a free kick rattled the bar and St Juste’s run past three Fleet players saw a useful cross open up the visiting defence but Liam King sent it wide.

A replay seemed on the cards before the referee spotted an infringement in the box and duly issued a straight red card for Clark to the confusion of most in the Fleet camp. Liam King stuck it away in the bottom corner, well out of Edwards’ reach.

Five minutes of injury time should have produced an equaliser as Cunnington played Kedwell into a decent position but the Fleet No.9 blades it over the bar and the Fleet were out.

Ed Miller has been Ebbsfleet United's communications manager and programme editor since 2014 and responsible for the club website since 2007. Contact him on ed.miller@eufc.co.uk
PrevPreviousNorth bound
NextVanarama’s Big Day OutNext