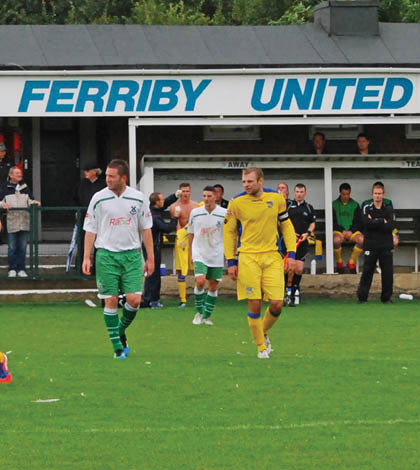 Fleet and three coachloads of supporters head north for the most important FA Trophy tie in six years – a journey into the unknown for fans and players alike who have scant knowledge of our Conference North opponents, North Ferriby United.

Jamie Day will have been sure to have done his homework on the Villagers – though how much he’s been able to find out in the short time since the quarter-final draw is anybody’s guess. Despite the Fleet’s big squad on paper, with two players cup-tied and another injured in midweek to add to the growing casualty list, Day is likely to only have the bare minimum available to name a 16-man squad.

Academy players Karn Miller-Neave and Casey Johnson were on the bench against Braintree in midweek and, until yesterday’s signing of Mark Gower, they may well have been included for the trip to North Ferriby. As it is, Day can also call on the services of Ben Jefford, who becomes available for this game, while he could also name himself on the bench, with his suspension for being sent off against Braintree not starting until February 10.

There’s very little to pick between North Ferriby and the Fleet. Both are in eighth position in their respective Conference leagues and both have scored 41 goals this season, with North Ferriby two points better off having played a game more – and both clubs are four points off the play-off places. The home side go into the game desperate to achieve the semi-final status they failed to manage last season when Gosport travelled to the Eon Visual Media Stadium and came away with a win.

Manager Billy Heath, a former North Ferriby player and a boss with two promotions and a Conference North runners-up spot on his CV, believes his team didn’t play to their own strengths last season and is determined to put that right against the Fleet. He told the Hull Daily Mail, “We have been here before and the experience of what happened to us against Gosport will serve us well. As long as we perform tomorrow then whatever happens, happens.

“We should be fresher than Ebbsfleet,” he added. “We wanted to play Oxford City, but it was postponed. If it had gone ahead, we wouldn’t have got back until after 1am which isn’t been ideal so maybe that postponement will turn out to be a blessing for us. We trained on Tuesday night just to keep things ticking over.”

There are very few familiar faces in the Villagers squad. Midfielder Adam Bolder is an experienced ex-professional who racked up 400 Football League appearances with the likes of Derby County in the Premier League as well as QPR, Sheffield Wednesday and Millwall. Sixteen-goal top scorer Tom Denton is the man to watch – quite literally as he’s 6ft 7in! – and has Conference Premier experience with Woking and Alfreton Town.

His co-striker Nathan Jarman faces a fitness test while Curtis Bateson – a former strike partner of Matt Godden’s at Scunthorpe – is cup-tied. Defender Daniel Hone and midfielder Jonathan D’Laryea, meanwhile, played against the Fleet in the Conference Premier.

The lowdown about North Ferriby United

Population 3,893
Rail line Ferriby Station (Hull-Sheffield and Hull-York lines) – six minutes’ walk to ground
Pubs Duke of Cumberland, 10-minute walk towards High Street or, a little further on, The Sandpiper. Inside the ground, there is a sports bar open to away fans with Sky Sports and BT Sport.
Parking There is a car park at the ground which is free, otherwise street parking
Distance from Northfleet and estimated driving time
197 miles (3h 30 mins)
Postcode/Satnav reference
HU14 3AB

Ed Miller has been Ebbsfleet United's communications manager and programme editor since 2014 and responsible for the club website since 2007. Contact him on ed.miller@eufc.co.uk
PrevPreviousStatement on stadium naming rights
NextNorth Ferriby 1-0 FleetNext