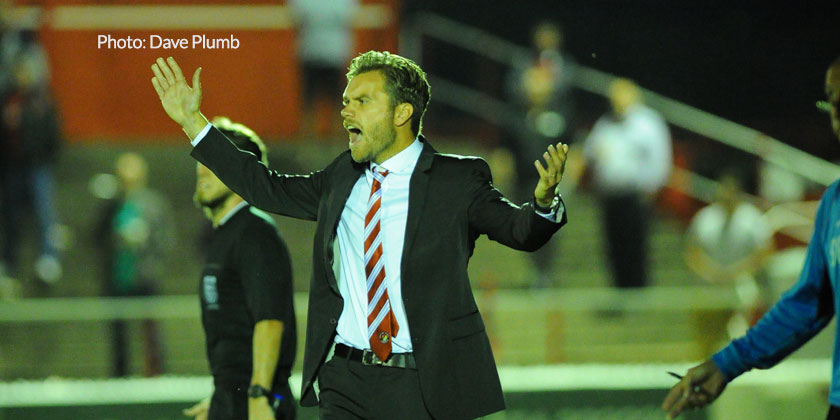 We’ve been looking forward to getting back to Stonebridge Road again after a few weeks on our travels as I’m sure you have too for this visit of Bath City.

Obviously since the game against Havant & Waterlooville here, we’ve had a couple of results away from home that haven’t gone our way. With the chances we had at East Thurrock, it was probably more a case of two points dropped than one gained: Stu Lewis, Keds, Darren McQueen all had chances, and then Cooky hit the post of course, so that was numerous opportunities to come away with a win. But I don’t want to over-analyse things at this stage: it’s too early to say what’s dropped and what’s gained.

We can sit here and pick apart a lot of our games this year… we’ve missed three penalties for starters and had three draws that could have added six points to our total. You can go through the many different opportunities like Saturday where we could have won the game, but we’re focused on keeping in touch with the leading pack. Most seasons over the past few years in this league, as we know full well, someone goes blazing out in front.

Of course, there’s no guarantee that Maidenhead’s form will dip or their points accumulation slacken, but we need to be in a position to take advantage if and when the times comes.

Our FA Cup exit the week before came as a big disappointment to all at the club. It was a banana skin and we were the ones to slip on it. That was the most disappointing day of this season so far considering what we’d done in the earlier rounds of the competition. We got a little bit complacent, having scored three or more in our previous five or so matches; it was like we scored and thought it would just happen again and we took our foot off the gas. That’s unlike us and no team can play on the day with six or seven players not performing. It gave us a jolt and we went to East Thurrock with a different mindset. We’ve had that again in training this week as well: we’re bright and we’re focused and that’s what I want to see.

We’re back at home this afternoon and next week and glad to be so. And in the league, our form is good with four wins and a draw, three of those away from home, so in terms of points acquired and remaining unbeaten, that’s been a good return,

I’d like to welcome Gary Owers, the officials, players and supporters of Bath City today. They’ve always been a solid, resilient side and they’re a decent squad again this season. In Nick McCootie and Marvin Morgan they have two dangerous strikers, with Morgan in particular having been around a while and knows the game well.

We’ve been in terrific form at home recently and played some exciting stuff and the players and myself know we need to get back to that and give supporters something to cheer after you backed us so well and in such numbers in October.

On a lighter note, Kenny Clark came through the Over 50s Walking Football unscathed, although I’m a little disappointed he didn’t stick one on the vice chairman. In case you hadn’t heard (and there are very few people who haven’t by now), Peter Varney scored twice on the evening. But we know it’s not all about scoring goals – or poaching them in this case – and Steve Gritt quite rightly questioned his work rate. So I’m not sure the Over 50s can carry such a luxury player…

Enjoy the game and keep backing the players as three points this afternoon would be a great launchpad as we head into an important November programme.