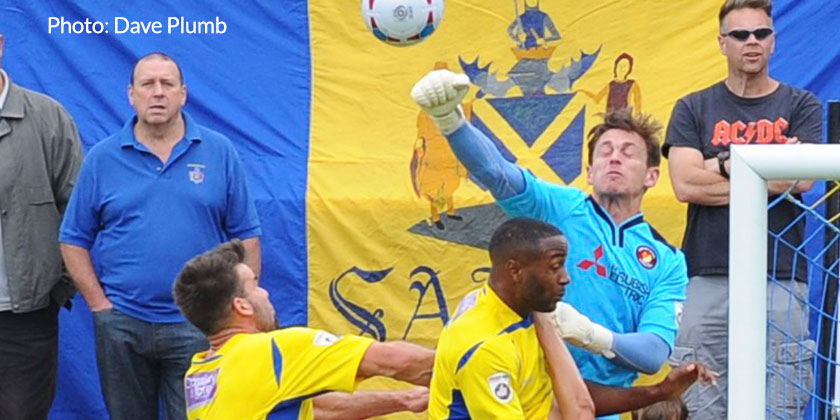 Daryl McMahon is looking forward to a game under lights with St Albans City poised to bring some familiar faces to Stonebridge Road on Tuesday night.

“We’ve had three games on three boggy pitches in a row,” McMahon told FleetOnline, “so we’re looking forward to getting going back at home. When I played here for Ebbsfleet, they were always my favourite games, Tuesday nights under the lights and that always seemed to produce a noisier crowd.”

McMahon will be reunited with his former boss Ian Allinson who took over the reins at St Albans last Friday and guided them to their first point in five games. “I rang him Friday to wish him luck. He’s got a good squad there and he knows the setup and how to play in this league and I’m looking forward to seeing him.”

Two City players will also be familiar to McMahon, with ex-teammates Ben Martin and Scott Thomas part of Allinson’s Boreham Wood side that won promotion via the play-offs last season, while Michael Thalassitis – who opened his account for City on Saturday – is also expected to feature as is former Preston Edwards understudy Joe Welch. And then, of course, there’s former Fleet hero Charlie MacDonald in his first game at Stonebridge Road since April 2007 when he scored a brace against… St Albans! MacDonald scored 42 times in 68 games for the Fleet across two seasons before moving back into the Football League with Southend United.

Despite only lifting themselves off the bottom of the table following Saturday’s draw with Concord Rangers (a game in which, like ourselves, they were pegged back in the last minute), St Albans’ squad is such that it would be little surprise to see them climb up the table. Under caretaker manager Harry Wheeler, they have drafted in plenty of new faces, with the likes of former Forest Green pair Tom Bender and Eddie Oshodi in form, while ex-Watford midfielder Al Bangura and one-time Fleet full-back Ugo Udoji, who won the league with  Bromley last season, are other recent recruits.

Up front with MacDonald and Thalassitis is former Staines top scorer and regular Conference South goal-getter Louie Theophanous, while there’s plenty of experience elsewhere with the likes of Martin, Thomas and Sam Corcoran. It’s likely a question of how quickly St Albans can gel with new players and a new manager and, while results are yet to come to fruition, their recent performances have promised much more.

Fleet have won eight of their last 10 matches against St Albans and the visitors haven’t registered a win since mid-December –10 games ago – but McMahon is expecting anything but an easy ride. “It’ll be another difficult game. They all are,” the Fleet boss said. “I was speaking to the Oxford manager after the game and he agreed there’s no point at this stage of the season even looking at the league table: it doesn’t matter who you play, everyone’s out for something still. Teams at the top of the table are trying to stay there, others are looking to get in the play-offs from mid-table, people down at the bottom are desperate to get out. Every game is a challenge and St Albans will be another one.”

Having viewed video footage of the Oxford City match, McMahon was unhappy with the award of the penalty that ultimately robbed his side of two points. “It was given for handball but their keeper has clearly pushed into Keds so it should have been our free-kick if anything.” And the Fleet boss felt the referee was looking to even things up after a sending-off that “was never a red card” according to McMahon. “But we should have been out of sight. It was a decent performance from the whole team, Cookie had a great 90 minutes, but we left ourselves open to their one chance and it feels like two points dropped.”

Fleet have no fresh injury worries ahead of Tuesday with McMahon’s late substitutions for Aaron McLean and Bryan van den Bogaert having no consequence on the St Albans match. “Aaron had a slight knock but should be OK,” McMahon said. “Bryan was on a yellow and I could see a red card coming so I didn’t want him getting sent off, so that’s why we brought Reiss Greenidge on for his first game.”

Kenny Clark, meanwhile, continues to be on the sidelines though he is edging closer to fitness. “Kenny’s not 100 per cent yet,” McMahon said. “Hopefully, possibly, next week but I don’t want to put a timetable on it. I don’t want to rush him back. It’s an ankle injury and I don’t want him to break down on it again so I want him back when he’s ready and for the rest of the season, not just hurried in for a game or two and then forced out again.”

Ed Miller has been Ebbsfleet United's communications manager and programme editor since 2014 and responsible for the club website since 2007. Contact him on ed.miller@eufc.co.uk
PrevPreviousAway shirts at reduced price
NextGreenidge goes on loan and KSC semi arrangedNext