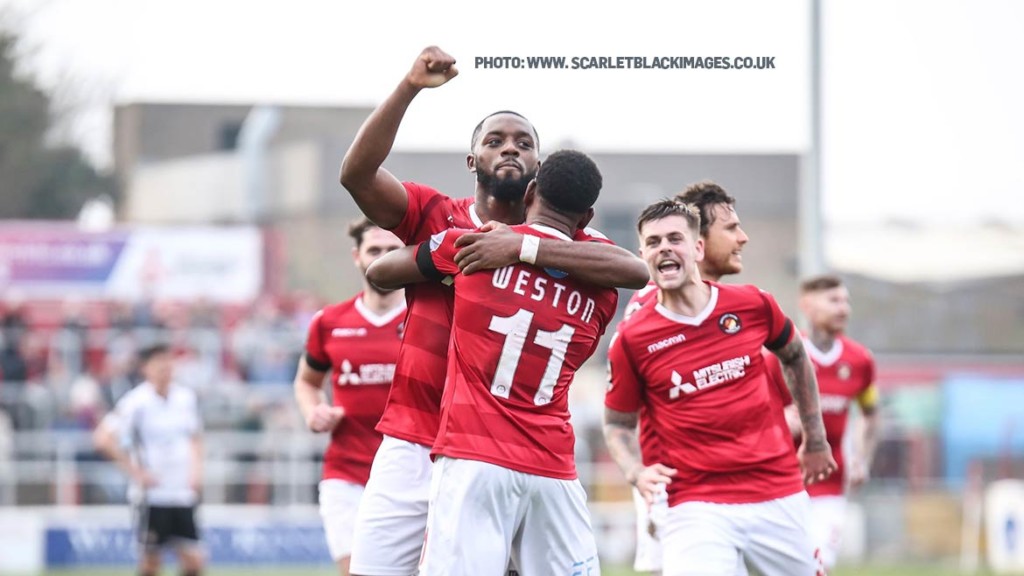 Garry Hill saw his Ebbsfleet side fly out of the traps against Wrexham having spent the pre-match warm up inside the changing rooms – and the experienced manager declared it one of the best squads he has worked with.

Hill, who took Dagenham & Redbridge to the brink of the Football League and won promotion with Woking, told BBC Radio Kent’s Ben Watts, “It’s a very special squad. I’ve been in the game a long time and this squad of players conduct themselves in a [good] manner. They have to deal with certain things off the pitch and then give a performance on the pitch which people witnessed here today. There’s nothing I can say to them any different: the character and commitment and performances they’re showing has been different class.

“I’ve had some very good sides over the years, but they come up with the best. Not only on the pitch, but off the pitch. You’ll go a long way to find a stronger, close-knit squad of players. Very private in one way, very professional in another and they go about their jobs the right way.

“Whatever comes, I’ve taken charge of a squad with quality, togetherness spirit and character on and off the pitch and people around the club who support, as supporters, volunteers who do things that don’t get notice, we’re working hard together.”

Of the game, the Fleet manager saw his side dominant in the first-half and ultimately score four times against the second-best defence in the National League and one that hadn’t conceded more than three goals before today.

“I’m very pleased,” he said. “It was always going to be a tough game. Certainly a game where we had to get three points, anything less would have been damaging for us with out hopes and ambitions of the top seven. The first 45 minutes was the best I’ve seen from an Ebbsfleet team since coming in charge in November. The movement, the strength and picking so many of the second balls up all over the park, they struggled to contain us.

“The front two were very powerful, very strong, they were winning the headers and the second balls as well as being too mobile for the Wrexham back line. We had a little bit of luck on the first goal but I felt at the time we deserved that. We didn’t come off the gas when we went 1-0 up. I didn’t imagine that [happening]. Wrexham are a good side and to be in our position at half-time, it was really up to us be a bit sloppy or silly in the second half to throw the game away. We gave a goal away cheaply and their tails were up. They had nothing else but to try and push on.

“When you’re 3-1 down you have to accept the risk of losing 5-1. Nathan Ashmore had to make a good save and it got a bit nervy. But we got the fourth – to say you got four goals against Wrexham at home and three points, it’s given us a great lift. All we can do is play our final five games and get as many points as we can get and go from there. We’ve got five cup finals at the moment.”

With off-field matters dominating, Hill left it to his players to do the talking on it and he knows with the leaders in the dressing room, he doesn’t have to police everything they do.

“I’ve got some very experienced players in there and the changing room runs itself,” he said. “They’re not under pressure that they get battered by me through the week, they have a lot of privacy, they’re a very close-knit group. You’ve got experienced players who’ve been successful above this level. They know how to run the changing room, they get the points across they need to get across, they make their stance which I respect but they know at three o’clock what they’ve got to go out there and do. And they’ve delivered. That’s the group.

“The support today was tremendous. Everything showed out there today that we’re coming at the right time in making a run, with momentum to hopefully get into that top seven. When I look at it over the 21 games we’ve been here now in charge, we’ve taken 41 points, six more than any other club in the league.”

Ed Miller has been Ebbsfleet United's communications manager and programme editor since 2014 and responsible for the club website since 2007. Contact him on ed.miller@eufc.co.uk
PrevPreviousFleet 4-2 Wrexham
NextWe’ll always give it our best, says KingNext