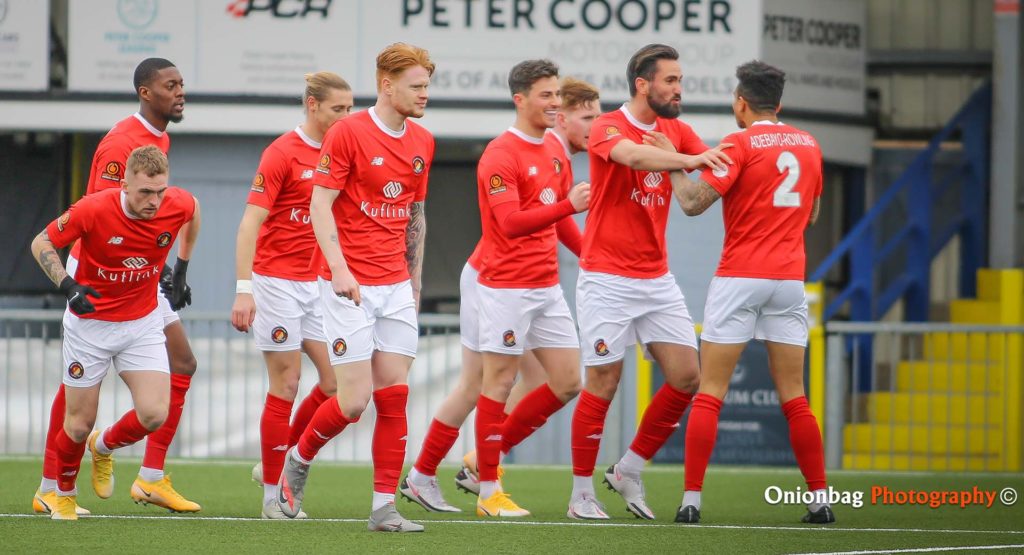 “I’m so proud to manage them”

Dennis Kutrieb couldn’t contain his admiration for the result his nine men made off with after a battle and a half in Havant.

The manager’s 78th minute substitution took a whole 24 seconds to come to fruition as Dominic Poleon scored the winner with his first contribution, and Kutrieb sensed his new signing could spring a surprise.

“We know if we bring him late in the game that he can cause problems, [against] every opponent – but especially against this opponent on this day from what we saw on the video,” Kutrieb told BBC Radio Kent. “So that was a little bit of a plan but that it worked so good and that he got the goal with his first touch, you can’t imagine that. But that’s the reason why we love football because anything can happen, even if you’re nine men. Hopefully we can keep going this season and hold on to the situation we have at the moment.

“It was a special feeling, but we knew before that the opponent was vulnerable,” he added. “We watched them two times and we saw that they have problems at the moment. We had different ideas about how we can cause problems and I think we did it really well, even after [just] a few minutes to score. We were very unlucky with the referee today, should it have been a penalty? For sure. But it doesn’t matter, so then we go down to 10 men, then we go down to nine. And when you see the workrate from the boys, how they fight it, how they work their socks off, I’m so proud to be the manager of them.”

The big talking point other than Poleon’s winner was the red cards for the managers and three players but Kutrieb drew a line under all that as he insisted the three points was what he came for.

“We should ask the referee what he thinks about it,” he said. “I was in my technical zone, the opponent came to us. To be honest it doesn’t matter. The game is gone, we wanted to win, we have the win. Sometimes in football, things happen. It’s done for me, I’m fine because we have the three points and that’s the only reason why we are here today.

“It was a great win for us today. You could see it on the pitch that we wanted to win, it was a special game for us. And a very important game as well and especially if you play with nine boys and get a win. That’s a really great win, one of the greatest wins I’ve seen here. It was a little similar to Hungerford Town at home, but today was really great.”

Fleet now travel to Welling United in midweek and face league leaders Dorking Wanderers at the Kuflink Stadium on Saturday. And the Fleet boss is adamant he wants the season to continue to reward the hard work put in by the whole club.

“It’s a very strange situation and for me it’s a disappointing situation as well because when I see that some teams don’t want to play, it’s very hard to accept the season would be cancelled,” he said. “You work so hard. As a manager, as a club. The players work so hard. When you can’t continue the season, I would be so disappointed for me, the whole club, the team and for the sponsors as well.

“We all love the sport and to be not allowed to play… you can see the lower leagues below us, they are all very disappointed. They all ask if they are allowed to play, what can they do to play. Some of our clubs don’t want to play so that’s a little bit weird. I don’t care just about the next two games, I care about the whole season and hopefully we can go for the whole season.”

Ed Miller has been Ebbsfleet United's communications manager and programme editor since 2014 and responsible for the club website since 2007. Contact him on ed.miller@eufc.co.uk
PrevPreviousHavant & Waterlooville 1-2 Fleet
NextEgan’s midfield marathonNext