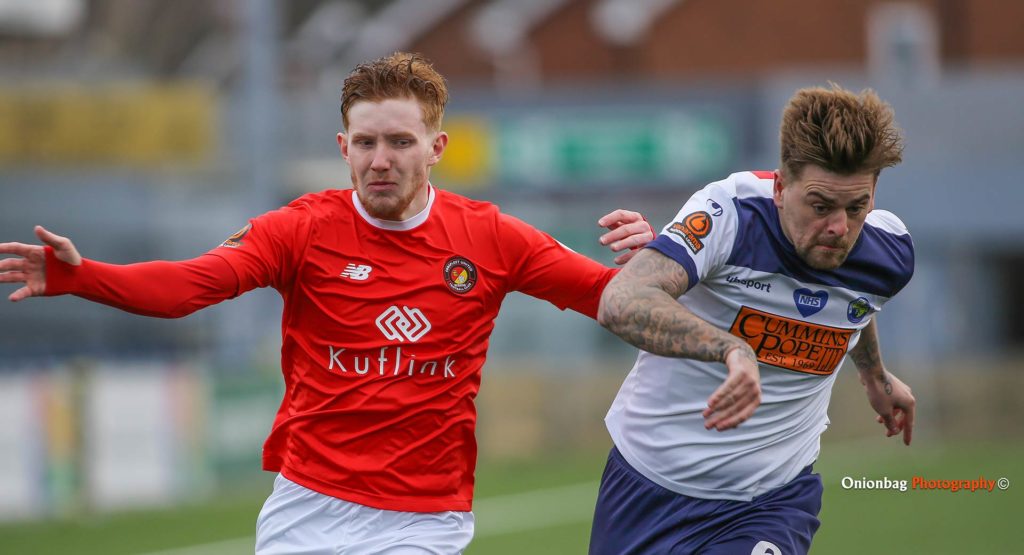 He scored his first goal for the club earlier this season but it’s the past few games where Alfie Egan has really caught the eye.

A well-taken goal in a friendly v Dorking Wanderers was followed by a man-of-the-match performance as voted by Fleet supporters v Hampton in midweek, as well as the winning goal. And on Saturday at Havant, he was voted the Non-League Paper‘s man of the match, is leading the current Fleet website poll by a country mile and provided the assist for Rakish Bingham’s opener.

Not a bad couple of weeks’ work by any standards.

“It’s a credit to a lot of people here to be fair,” said a modest Egan. “A lot of people have got my confidence up, the gaffer’s definitely believing in me. I’ve shown what I can do in training and in the games now so I just want to keep on the ground running. And to be fair, it’s credit to the boys as well, they’ve got me playing the way I want to play. I’m back to running in behind, to getting in the box.”

When Dennis Kutrieb talks of players working their socks off, Alfie Egan’s one of the first to spring to mind. His work rate and distance covered in the 90 minutes yesterday was above even his own usually impressive stats and typically, despite having to plug huge gaps in midfield as part of a nine-man team for half an hour on Saturday, he thoroughly enjoyed himself.

“I think that [game] was one of my favourite ones,” said Egan. “Unfortunately we got two lads sent off, whether they should have been is questionable but you can see that we’re a team, you can see that we’re together. Even when we’re 1-1 and we’ve got nine men, you still feel that we can win the game. Our togetherness right now is second to none, and any game that we go into, regardless of the circumstances, we feel that we can win.

Egan, like his teammates is spurred on by the spirit in the camp – but he knows the players not involved are just as capable of stepping into his role if his performance levels dip.

“There’s boys at home watching, there’s boys in the dressing room or on the bench that can easily just come in and play,” he said. “But we’ve got togetherness where people that are not even playing at the moment, they’re willing us on. Like Westy’s always in my ear, he’s texting me, he’s telling me how I can improve and it helps a lot.

“We’ve got a momentum now. I know the gaffer said it’s hard to get momentum when you don’t know whether you’re playing or not but that’s three [wins] on the spin if you don’t include the friendlies and whatever game we do play, we’re going to win, we’re going to play how we want to play, and play some exciting football.”

Ed Miller has been Ebbsfleet United's communications manager and programme editor since 2014 and responsible for the club website since 2007. Contact him on ed.miller@eufc.co.uk
PrevPrevious“I’m so proud to manage them”
NextMonday is Q&A-II DayNext