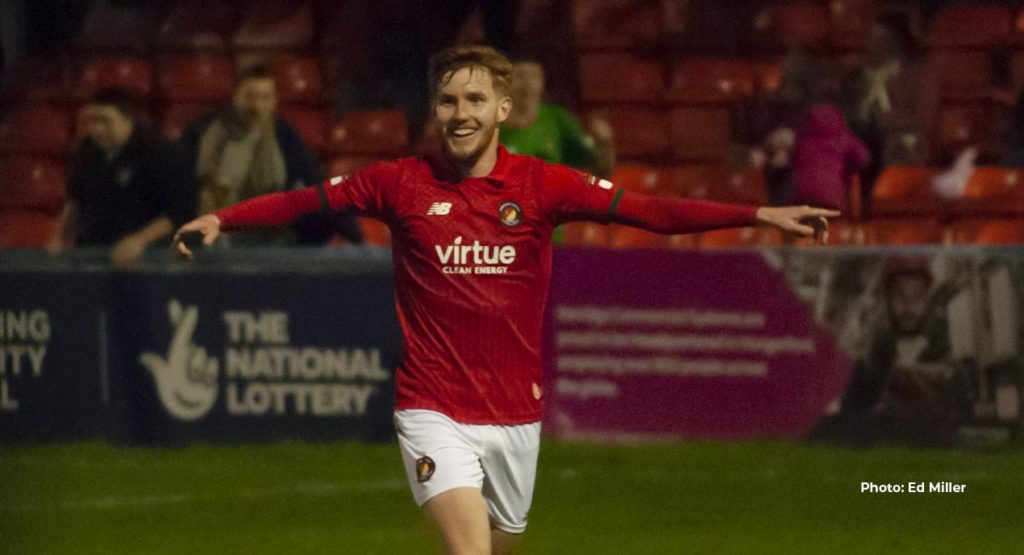 What an advertisement for the Vanarama National League South Hungerford and the Fleet played out this afternoon in a seven-goal thriller and a nailbiting climax.

For the neutral it might have been a shame someone had to lose but Fleet were delighted to return home with the points having led 4-1 and seen off Hungerford’s brave late comeback that pushed the visitors all the way.

In between all the thrills were some excellent goals too, with Sefa Kahraman scoring his first goal in English football and Dominic Poleon coming off the bench to slot away a fabulous solo effort.

There were three changes for the Fleet, Chris Haigh returning to replace Josh Gould while Tobi Adebayo-Rowling and Alfie Egan came in for Dominic Poleon and Lee Martin, the latter having limped off late on at Leyton Orient.

On a bumpy pitch, Fleet – cheered on by another excellent travelling turnout that boosted the home attendance to its largest in the league this season – knew they were in for a physical 90 minutes against a big Hungerford side.

But the Fleet got off to the best possible start, Craig Tanner’s quality shining through with a great ball into Rakish Bingham, whose perfectly timed run allowed him to slot home on six minutes.

That goal rocked Hungerford out of their gameplan and they struggled to impose themselves, Bingham testing Luke Cairney with another drive on the quarter-hour that the goalkeeper pushed away. Hungerford lost Matt Partridge to injury midway through the first-half but before Fleet could take advantage of that tactically, they let the home side back into the game within a minute.

Sol Wanjau-Smith sped forwards on to a ball that Haigh came off his line and out of his box to clear but the Hungerford frontman was able to race on past the Fleet goalkeeper and slot it home.

That upset the Fleet’s rhythm for a spell but they were back on the attack when Greg Cundle cut in from the left to send a curling shot past the upright. The visitors utilised both wings to good effect and Adebayo-Rowling made several in-roads with tireless and speedy attacks. From one such foray down the right, he crossed to the far post towards Cundle who touched it just wide.

Tanner attempted to deploy further forward in support of Bingham and he constantly showed great skill but found himself blocked at every avenue by some effective man-marking. Jack Paxman, too, employed plenty of direct running in attempts to breach the home defence but Fleet lacked the cutting edge in the face of some strong defending to add to their single goal – and had to be wary of some strong and pacy counterattacks from Hungerford.

Both sides had a couple of shouts for a penalty, first Hungerford when Wanjau-Smith fell under a tackle and then at the other end Tanner felt he was tripped but on both occasions the referee barely entertained the appeals.

The Fleet boss sent his players back out fired up and in a mood for more purposeful attacking football as the second-half resumed, Cundle soon finding Joe Martin out wide whose shot was blocked by Cairney.

Kutrieb went for even more attacking impetus 10 minutes in with the introduction of Poleon and Fleet went ahead within 60 seconds of the top scorer’s introduction. It was Tanner again supplying the goods, this time from a corner, and he swung in an excellent delivery that might well have gone in anyway but Kahraman got the vital touch at the near post to wrong-foot Cairney for his first goal for the Fleet.

Matt Jones flashed an effort on target for the home side and Cundle threw himself into danger with a vital block on 65 minutes but Fleet were largely comfortable, even more so when they added to their goals total on 74 minutes.

And what a goal it was. Joe Martin cleared upfield and Poleon picked the ball up 25 yards out on the left; he cut inside, wrestled off the challenges of three white shirts and somehow, keeping possession while weaving his way through, despatched a shot beyond Cairney for 3-1.

And 3-1 soon became what looked to be an unassailable 4-1 10 minutes from the end. Again, it was a fine goal started by a powerful burst upfield from Ben Chapman. Joe Martin’s delivery to Poleon was deftly touched into Egan’s path, the midfielder taking it in his stride to stroke home.

There seemed to be no way back for Hungerford but the spirited home side hadn’t quite given up the ghost. With five minutes left, top scorer Ryan Seager took receipt of the ball in midfield and had space to advance and loose off an excellent shot which flew past Haigh.

Even then, alarm bells weren’t quite ringing for the Fleet, but Hungerford ensured that all changed when they reduced the arrears still further three minutes from the end. James Rusby’s not-so-secret weapon – his long throw-in – bounced kindly and over defenders for Seager to divert beyond Haigh and set up a worrying last three minutes plus four of added time for the Fleet.

The visitors withstood a couple of free-kicks and might have got away at the other end when Tanner forced his way into the box only for Elliott Romain be flagged for offside. But it all helped tick down the clock and in the end Hungerford couldn’t quite find the final gear to equalise.

Ed Miller has been Ebbsfleet United's communications manager and programme editor since 2014 and responsible for the club website since 2007. Contact him on ed.miller@eufc.co.uk
PrevPreviousNo lack of hunger on Fleet’s return to league action
Next“That was a big win after Cup exit,” says Fleet bossNext