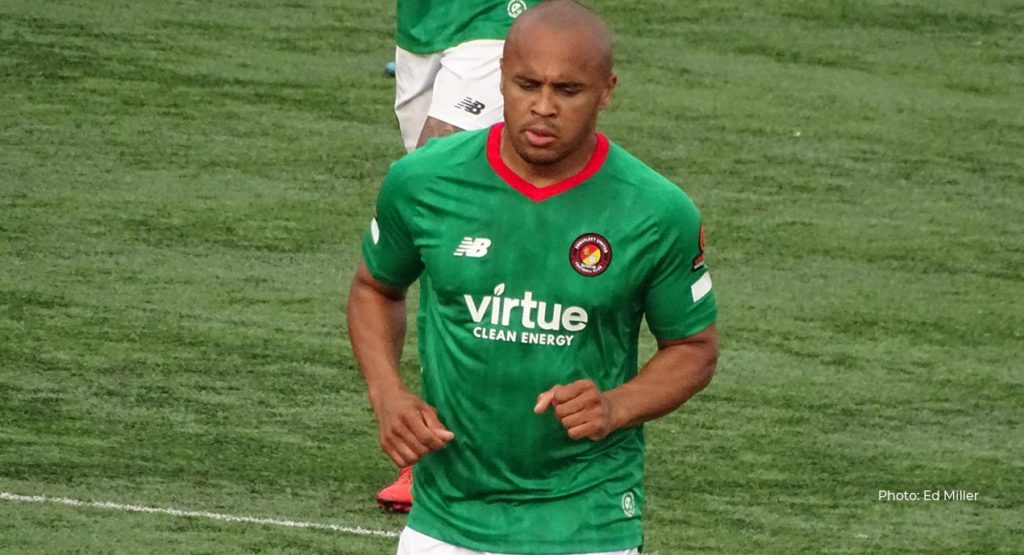 Denis Kutrieb praised match winner Elliott Romain who came off the bench and within five minutes had fired the Fleet into the Third Qualifying Round at Carshalton Athletic yesterday.

“I’m very happy for him because he’s very humble,” said Ebbsfleet boss Dennis Kutrieb. “He’s waited for his chance, he’s working so hard. He was part-time and now he’s full-time and that takes time for every player. We had the same experience last season. I said to him in the beginning, you don’t need to rush yourself as a full-time player. You will score your goals for us. Today he came on and I said to him, ‘you have 10 minutes to score’, he’s got a brilliant goal. But it was very well prepared from [Ben] Chapman, a great assist. He was the outstanding player today for me, rock solid at the back, he defended everything and played some dangerous balls in behind and it was a great push forward to assist Elliott Romain.”

Romain and Chapman weren’t the only Fleet players to take the plaudits, with Kutrieb praising the work of debutants Chris Haigh and Kreshnic Krasniqi.

“Chris was outstanding and I think he gave us much security,” said Kutrieb. “Every long ball in behind, he was there a little bit like a sweeper. He was desperate to play and he deserved to play. He really trained hard and he’s such a nice guy and a good character for us. Kresh was good as well and that’s what we expect from him, that he gave us a little bit more security as a holding midfielder. He wins his duels and of course he was a little bit tired at the end of the game. But that’s normal, I think West Ham was his last game over 90 minutes, at least two months. You can feel it when you have a first proper game, that that the legs are getting more and more tired after 60/70 minutes but his efforts were really good.”

Carshalton, who have been gunning for promotion into the National League South for the past few seasons, pressed the Fleet for spells of the game and their tenacity didn’t surprise the Fleet boss one bit, having viewed several of their previous matches.

“I was not surprised because we watched them on Monday,” he explained. “And we saw a few games before as well so we knew they have good quality. I said to the boys during the week that I wouldn’t be surprised if this team is in the mix in the table during the season in their league because they have everything they need. They are solid at the back, they have quick wingers, they have a good striker. So we knew before that we’d have a really tough day today.

“But the most important thing in cups is that you have the right result. That’s what we wanted, to stay in the hat. The boys put a great shift in and as you can see we’re a fit team. They could go when the [opposition] were a little bit tired, we could put a little more effort in and created more chances and then finally get the ball over the line. I’m very happy because it’s the biggest cup in the world and you want to stay in it as long as you can.”

Kutrieb’s future team selections will have a few more names on the list as having welcomed back not just Krasniqi, he was also able to name Alex Finney and Kieran Monlouis on the bench.

“I think everyone would be available for a next league game,” he said. “You could see Alex Finney and Kieran Monlouis back on the bench today and all the other boys are ready. So now we need to choose the right 16 players for Chippenham but we have nine days to make the right decisions. That will be a very tough game.

“I said from the early beginning that we have our squad, we didn’t need to search for other players and now everyone is really back fit, we can pick what’s the best thing. And for the players [it’s good] because they need to deliver, if they don’t deliver the others are waiting to get the chance and that’s always good to have.”

Ed Miller has been Ebbsfleet United's communications manager and programme editor since 2014 and responsible for the club website since 2007. Contact him on ed.miller@eufc.co.uk
PrevPreviousCarshalton Athletic 1-2 Fleet
NextChapman seizes second Cup chanceNext