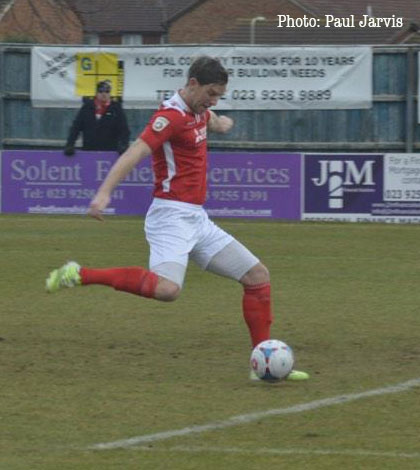 Adam Cunnington made it three goals in two games but Fleet let in two quickfire replies from Gosport to rob them of the three points. And with results elsewhere going against them, Jamie Day’s side will need to up their win ratio starting with Staines on Tuesday week.

Tom Bonner was handed his debut at the expense of Anthony Acheampong while Sean Shields got the nod to replace the injured Joe Howe. And as they did at Braintree, Fleet – and specifically Cunnington – got off to a dream start when the Gosport defence let a pass through to the big No. 10 and he tucked it away from close range.

With the wind at Fleet backs, the aerial dominance of Cunnington and physical presence of Danny Kedwell, together with the mobility of Matt Fish and Shields going forward, kept Gosport firmly on the back foot for much of the first half and the home goalkeeper Nathan Ashmore was in irresistible form.

Nonetheless, Preston Edwards was called into action on 16 minutes to deny Matt Paterson as top scorer Justin Bennett set him free but Gosport struggled to really trouble the Fleet back line.

Fish and Shields both saw crosses snuffed out by Ashmore and when one did get through, Cunnington saw his header gathered by the keeper. On 25 minutes, Kedwell’s effort was stopped at a stretch by Ashmore and he then beat Kenny Clark to a cross from a corner.

Borough had a couple of breaks with Bennett and Paterson looking threatening without much end product while Shields went close again three minutes from half-time with an ambitious curling shot that drifted just wide.

Fleet continued to enjoy a comfortable afternoon into the early stages of the second half and Shields again brought a save out of Ashmore, before Kedwell saw the same result from his effort. Ashmore then thwarted Cunnington as he rose to meet a Fish header but the second goal was coming and with Cunington’s next chance, he bettered the goalkeeper once more. It arrived on the hour mark, with Shields supplying the ammunition and Cunnington on hand to claim a deserved second.

It seemed, given Gosport threat level to that point, like job done… but Alex Pike’s side had other ideas. On 65 minutes, danger man Paterson hauled his side back into it out of nothing, darting on to a pass to slide a shot underneath Edwards and suddenly the home side were reinvigorated.

For all that, nobody expected what happened three minutes later when Dan Wooden – back from a recent suspension – came on to an inviting ball and absolutely let fly with an unstoppable shot that curled then dipped into the top left corner to stun the previously confident Fleet.

The home side fancied their chances from that point and Fish had to be alert to clear a low cross from the foot of his post. Either side could still have nicked it, but for all their first-hour dominance, Fleet were probably glad to hear the final whistle after Bennett’s free-kick cannoned off the bar and flew up and over at the death.

It was no doubt two points dropped but the travelling fans saw yet another improvement in their new-look side’s cohesion to suggest that if they don’t run out of games, Fleet can roar back into those play-off spots.