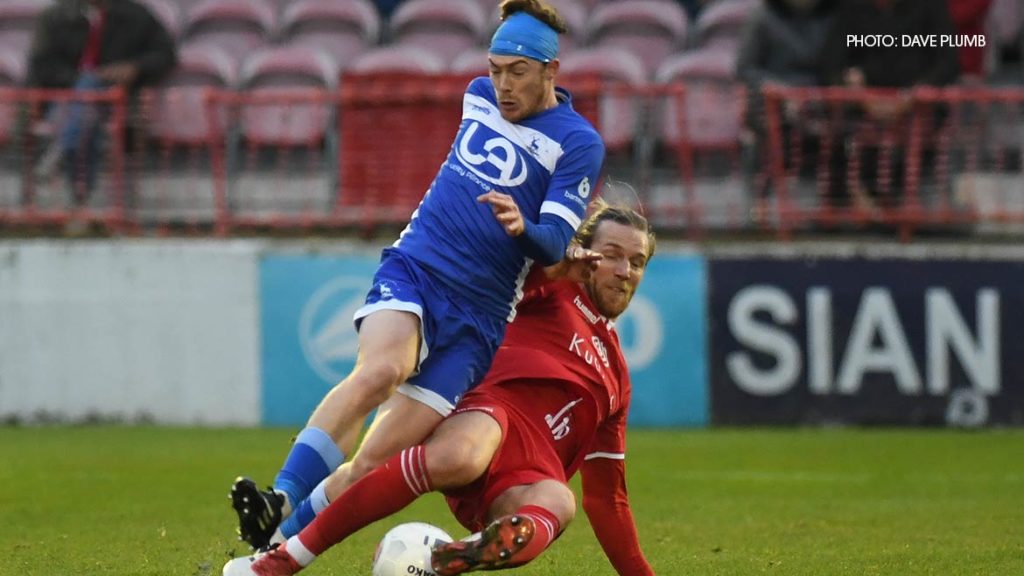 Fleet will look to shake off the disappointment of narrow defeat to one play-off chaser by seeking to protect their unbeaten record against another.

Following last Saturday’s late heartbreak at home to Stockport County, Kevin Watson’s side embark on their second farthest journey of the season to Hartlepool who sit one place above and on level points with last week’s opponents.

That result made the requirement for a win all the greater this weekend and Fleet know they must go for broke – but not let their hearts rule their heads.

That’s the view of midfielder Michael Timlin who enjoyed a fine home debut last Saturday. “We have to make sure we’re not getting too gung-ho, throwing bodies forward and leaving ourselves exposed. But we have to go for it now, be positive, on the front foot, stand up and be counted and see where it takes us.”

And Fleet’s record against Pools is a good one, with the home side desperate to end the ‘bogey team’ status we have enjoyed since their relegation from the Football League.

In five meetings, Hartlepool have yet to win one and until November’s meeting at the Kuflink Stadium, hadn’t even found the net. That they did – twice – in the earlier fixture should really have seen Pools claim that first win but 10-man Fleet shot back with two second-half goals to grab a point.

Fleet’s previous two visits to the Super 6 Stadium have both ended in 1-0 wins, Dean Rance and Corey Whitely inflicting those defeats on Hartlepool – but it’s a much-changed side that travels north this weekend.

Indeed, the Fleet will have rung plenty of changes even since November’s head-to-head with two-goal hero Myles Weston as well as Albie Morgan and Alex Reid no longer at the club.

And to that exit list Watson has now had to add Adam Mekki, the winger having been recalled by Bromley this week. Sure to be a blow to the manager’s tactical plans, with Mekki putting in a standout performance in Fleet’s last away journey, the manager does have options with John Goddard, Alex Lawless, Andre Blackman and Alfie Egan as extra bodies.

Jordan Holmes is set to keep his place in goal with David Gregory still out, while Fleet will be hopeful that Ayo Obileye can be named in the squad once more.

Hartlepool come into this fixture looking to make a late break for the play-offs. Manager Dave Challinor’s perhaps hasty sacking from AFC Fylde has instead helped galvanise Pools and they could enter the top seven for the first time this season if they pick up three points against the Fleet.

They are third in the form table, having won five and lost only one of their last nine games, which has included impressive victories over Solihull Moors, Notts County and Stockport County.

Fleet will hope to exploit a few injuries, however, with Adam Bale, Fraser Kerr, Michael Raynes, Luke Williams and one-time Daryl McMahon transfer target Luke James all likely to be missing. Three of those played at the Kuflink Stadium, as did striker Nicke Kabamba who has since departed for Kilmarnock.

The main dangers to the Fleet will be 12-goal top scorer Gime Toure and midfielder Gavan Holohan, who scored twice in our 2-2 draw earlier this season.

Ed Miller has been Ebbsfleet United's communications manager and programme editor since 2014 and responsible for the club website since 2007. Contact him on ed.miller@eufc.co.uk
PrevPreviousBreak-in at club bar
NextFleet’s dementia awareness dayNext