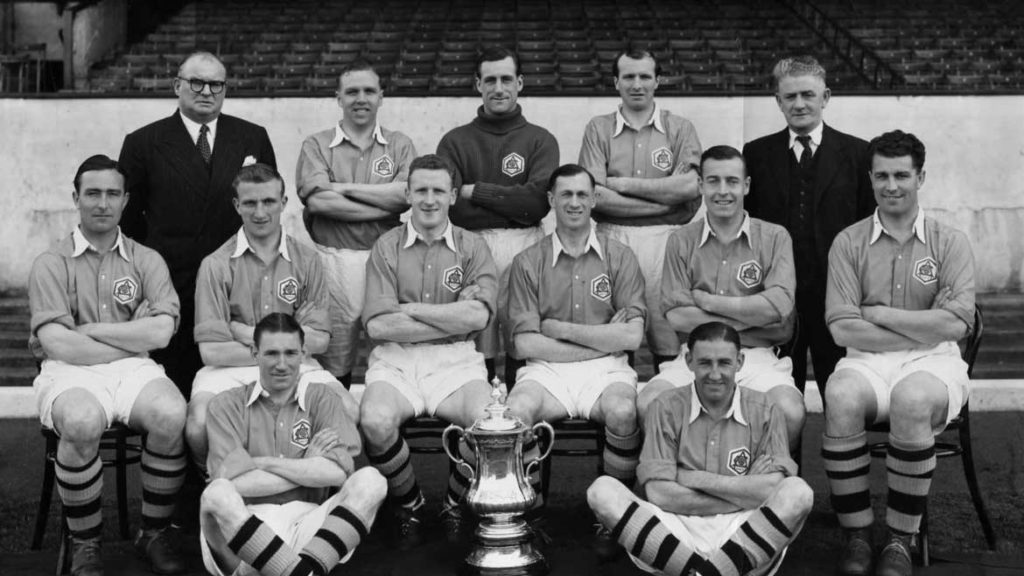 On what would have been FA Cup Final day, we look at some players who strutted their stuff on Stonebridge soil and also won on Wembley Way to gain FA Cup winners’ medals.

Twice in three years in the early 1950s there were as many as four future Fleet players involved in FA Cup Finals (three of them – Freddie Cox, Jimmy Logie (both seated front) and Alex Forbes are pictured above in the 1950 winning side).

And then there were five more who reached the Cup Final but didn’t have quite as much good fortune once they got there. Read on for the full lowdown.

PETER CROKER  Charlton Athletic 1947
The great uncle of Tottenham and England player Eric Dier, Peter Croker (whose brother Ted was FA secretary for many years) was a Kent-born full-back who started out at Bromley. He guested for Charlton during wartime as early as 1941, beginning an 11-year association with the Addicks. He missed the 1946 FA Cup Final defeat through injury but was included in Charlton’s winning side the following year as they beat Burnley in extra time. Croker moved to the Fleet in August 1953, playing 31 times in his one-season stay.

FREDDIE COX Arsenal 1950
An outside right who played for Northfleet United between 1936 and 1938 when the club was famously used as a Tottenham nursery. He won Kent League, Kent League Cup and Kent Senior Cup titles with Northfleet before moving to Spurs a year before the war broke out. During the Second World War he served in the RAF, winning a Distinguished Flying Cross. He made the rare move from Spurs to Arsenal in 1949 for £12,000, playing in the Gunners’ FA Cup Final victory over Liverpool a year later alongside Jimmy Logie, Alec Forbes (see below) and against another player who would go on to play at Stonebridge Road, Liverpool’s Kevin Baron. Two years later he scored in the semi-finals to earn Arsenal another Wembley final, but this one they lost to Newcastle. Again he lined up with Logie and Forbes – as well as future Fleet manager Lionel Smith. He later managed Gillingham and Bournemouth, dying in 1973 aged just 52.

JIMMY LOGIE Arsenal 1950
Joining Arsenal in 1939, Edinburgh-born Logie’s career was stalled by the war, during which he served in the Royal Navy. He won two First Division titles with the Gunners, as well as the 1950 FA Cup Final in which he set up both of Arsenal’s goals. He was an FA Cup runner-up with Arsenal two years later and played more than 300 times for the Highbury club before becoming a major signing for the Fleet in 1955, reuniting with colleague Lionel Smith who had taken over as player-manager at Gravesend & Northfleet. Despite entering the twilight of his career, Logie played for five seasons at Stonebridge Road, clocking up 217 appearances and being instrumental in the club’s 1957/58 Southern League title. He ran a pub in north London after retiring but fell on hard times in later life, opening a newsagent’s near Piccadilly Circus, and died in 1980.

ALEC FORBES Arsenal 1950
The third former Fleet man who won a medal in the 1950 FA Cup Final, Forbes was a Dundee-born wing-half and Scottish international who spent eight years at Highbury after joining them in 1948 following four years at Sheffield United. He played 240 times for the Gunners winning two League titles as well as the FA Cup. He wound down his career with brief spells at Leyton Orient and Fulham before joining Fleet’s impressive Southern League champions in August 1958. He played only seven times, scoring twice in a 7-2 win over Hastings, before retiring. A teacher and coach in later life, he was back at Arsenal as a trainer before working in Israel, Kuwait and South Africa where despite apartheid he coached young black players in the townships. He died in Johannesburg in 2014, aged 89.

ROY DWIGHT Nottingham Forest 1959
Perhaps as well known for being Elton John’s cousin as he was for winning the FA Cup, the Dartford-born winger began his career with Fulham before moving to Forest in 1958. In the cup final the following year, against Luton Town, he scored the opening goal but suffered a broken leg after half an hour. In the days before substitutes, Forest held on with 10 men to win 2-0 and Dwight’s medal was delivered to him in hospital after the game by Forest’s manager and skipper. The injury disrupted his career and he signed for the Fleet in 1961. As a centre forward, he scored 14 goals in 37 games, earning him a move back into the League with Coventry City, then managed by Jimmy Hill. He later managed Tooting and Dartford (as well as Crayford dog track!) and died in 2002, aged 69.

Roy Dwight (fifth from left, back row) with his victorious Forest side in 1959

BILL NICHOLSON Tottenham 1961, 1962, 1967
The legendary Spurs double-winning manager played for Northfleet United between 1936 and 1938, picking up Kent honours. In 1958 he was appointed to the manager’s job at White Hart Lane and set about rebuilding Tottenham. Three years later he achieved the first double of the 20th century, beating Leicester at Wembley to clinch the cup. He won it again the following year against Burnley and for a third time in 1967 against Chelsea, as well as a European Cup Winners Cup, a UEFA Cup and two League Cups. He died in 2004.

TOMMY BALDWIN Chelsea 1970
A Chelsea stalwart who lost the 1967 cup final to Nicholson’s Tottenham but was successful three years later in a replay against Leeds. He also helped Chelsea to the Cup Winners Cup against Real Madrid in 1971 but within five years was playing his football at Stonebridge Road. Injuries curtailed his appearances to just seven games, though he later played for Brentford.

Tommy Baldwin (centre) flanked by Peter Bonetti and John Hollins (and a teapot!) hold the FA Cup aloft in the Wembley bath.

CHARLIE BUCHAN Sunderland 1913, Arsenal 1927
A young Buchan won a treble at Stonebridge Road with Northfleet United in 1909/10 before his talent took him to the top when he signed for Sunderland in 1911. He played in the 1913 FA Cup Final that the Black Cats lost 1-0 against Aston Villa (at Crystal Palace) and, after serving in the trenches, resumed his football career. He was back in the final in 1927, but again left disappointed as Arsenal, who he’d joined in 1925, lost by the only goal to Cardiff City at Wembley. He retired the following season and pursued a successful career in newspapers and broadcasting until his death in 1960.

Above: Charlie Buchan lines up in a photocall prior to the 1927 FA Cup Final v Cardiff City and as Arsenal skipper shakes hands ahead of kick-off.

LES FELL Charlton Athletic 1946
Not a ‘Fleet’ player as such, as it was at Gravesend United he began his career, ‘Lightning’ Les Fell lived locally and turned out as a winger for the Shrimpers immediately after the war. He was signed by Charlton in 1946 and was an FA Cup finalist in his first season, the Addicks losing 4-1 to Derby. He missed out on Charlton’s winning return to Wembley the following season. He died in 2010.

WALTER RICKETT Blackpool 1948
Aged 30 when he signed as an outside left for Blackpool in 1947, he appeared at Wembley in his first season, lining up alongside Stanley Matthews and Stan Mortensen as his side lost 4-2 to Manchester United. He played for both Sheffield clubs as well as Rotherham and Halifax before managing Ramsgate and Sittingbourne. He took over the manager’s job at the Fleet in 1963 and ‘enjoyed’ three seasons of struggle before leaving for Leyton Orient and an assistant manager’s job. One record he did clock up at the Fleet was oldest ever played when he donned his boots once in the 1963/64 season at the grand old age of 46! He died in 1991.

Walter Rickett (fourth from right) lines up with Stanley Matthews as King George VI greets the 1948 Blackpool side.

KEVIN BARON Liverpool 1950
Lining up against three more future Fleet players in Jimmy Logie, Alex Forbes and Freddie Cox, Kevin Baron had been at Anfield since the end of the Second World War and was instrumental in helping Liverpool to their first ever Wembley cup final. He played more than 140 times for Liverpool up to 1954 and then a similar amount of games for Southend United. A season at Northampton followed before he arrived at Stonebridge Road in 1959. Heralded as a big signing, he didn’t quite produce the goods in an injury-hit single season, later joining Aldershot and Wisbech Town. He died in 1971 but it wasn’t the end of the Baron family’s connection with Liverpool. Tragically, in 1989, Kevin’s brother Gerard was the oldest victim of the Hillsborough disaster.

Liverpool’s Kevin Baron (No.8), one of four future Fleet players in the 1950 FA Cup Final, watches on as Jimmy Logie climbs high for Arsenal at Wembley.

LIONEL SMITH Arsenal 1952
A Fleet legend for clinching the Southern League title as manager in 1957/58, Smith had a successful career with Arsenal, during which time he picked up six England caps – all of them in his thirties. He joined Arsenal as a full back in 1939 but served in the Royal Engineers during the Second World War, breaking into the team during the 1948/49 season. He missed out on the Gunners’ Wembley success of 1950 against Liverpool, but was in the team for the 1952 final against Newcastle, which the Tynesiders won 1-0. The 1952 final was another that featured four future Fleet players (Logie, Cox, Forbes and Smith), but this time all of them were on the losing side. Better followed the next season when Smith picked up a League winners’ medal with Arsenal. He joined Watford for a season in 1954 before being installed as Fleet player-manager in 1955. Restricted to only 12 appearances because of injury, his impact as manager was more lasting. He ended his time at the Fleet in 1960 and went into the licensing trade, dying in 1980.

For the second time in three years, there were four future Fleet players lining up at Wembley but all of them featured on the losing side as Newcastle United beat Arsenal.

Ed Miller has been Ebbsfleet United's communications manager and programme editor since 2014 and responsible for the club website since 2007. Contact him on ed.miller@eufc.co.uk
PrevPreviousScreentime for Shots semis
NextGary Vaughan RIPNext