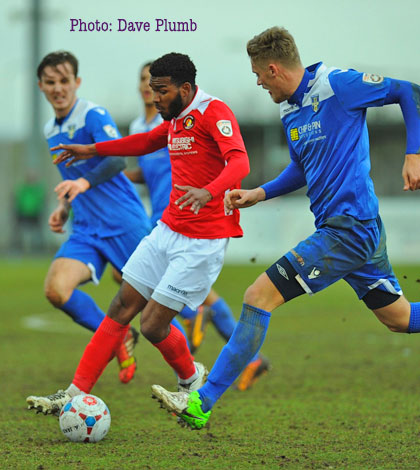 Fleet seek to end the Blues

Much like the club he is back to take temporary charge of this Saturday, Daryl McMahon has had something of a topsy-turvy season. Beginning 2014/15 as Fleet captain, he has also been academy manager, first-team caretaker manager and back to skipper before then departing the club for league-title challengers Boreham Wood, to once again return for the final game of the season to the caretaker manager role at Stonebridge Road.

Fleet fans can certainly sympathise that football has never been a funnier game than this season. Just as it seemed defeat at Bath had allowed the 2014/15 campaign to simply limp slowly towards its natural conclusion, events this week have meant that a nothing-to-play-for league fixture will again be contested in the full glare of the local media.

McMahon, who with Steve Gritt was present at Stonebridge Road for the Academy side’s win over Tonbridge on Wednesday, yesterday put his charges through their paces in training and reported a bubbly atmosphere, with the squad determined to end the season on a relative high. Fleet directors were also in attendance to speak to the players about events of the past week.

McMahon’s line-up for the final game is anybody’s guess – he only played once with many of the new arrivals in his last game at Sutton United – and he also has the few of his Academy squad registered to Conference forms to choose from as well. In his previous spell as caretaker, which saw him undefeated with two wins and a draw, he didn’t tinker too much with the starting XI.

The best Fleet can achieve this season is ninth place if they beat Bishop’s Stortford and Hemel fail to win against Eastbourne. However, a defeat, together with a Chelmsford win at home to – ironically – McMahon’s former club Boreham Wood would see Fleet finish in 11th.

Bishop’s Stortford, in 16th place, can only slip one place depending on results but their current position is the highest they can finish. They will more than likely be happy to settle for that after a budget cut last summer and a relegation battle earlier this season that saw them in the bottom three just past the halfway mark.

Having lost a number of influential players including Reece Prestedge (to champions Bromley) and of course Matt Johnson to the Fleet, manager Rod Stringer has struggled at times to find a settled squad but after winter made a number of canny acquisitions that saw Stortford really hit top form and in the end escape relegation by some distance.

That good form coincided with the Blues holding Fleet to a 1-1 draw in February in a match where their strong finish could have taken all three points. Goalscorer Sheldon Sellears, the supporters’ player of the year, is likely to start and he has since been complemented by former Barnet and Grimsby striker Greg Pearson who has form of scoring at Stonebridge Road.

Stringer told the Herts & Essex Observer this week, “All I’ve done is what we wanted to achieve, which is to keep the club in the division. It has been a tough, tough season and that just sums up what this level is all about really.

“All I want to do now is get the last game out the way and go from there. If the club can find us a bit more money then I’ll look at it again and try to go again next year. These type of games when there’s nothing to play for apart from trying to get another three points, it’s about people who are going to go out and give you that little bit extra.”

Ed Miller has been Ebbsfleet United's communications manager and programme editor since 2014 and responsible for the club website since 2007. Contact him on ed.miller@eufc.co.uk
PrevPreviousMacca back to take charge on Saturday
NextStanding downNext