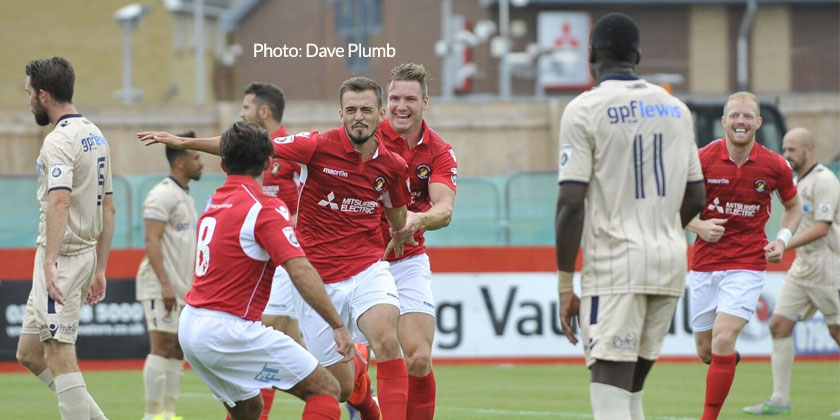 Fleet refuse to look beyond The Vale

Fleet may well have brushed Wealdstone aside by 4-1 at Stonebridge Road earlier in the season (pictured) but fresh from being one of only two sides to conquer leaders Maidenhead United, the Stones are likely to be a much different prospect at The Vale this Saturday.

Looking to build on the hard-fought win over Dartford on New Year’s Day, Daryl McMahon will be urging his side to build real momentum going into 2017 as they chase the aforementioned Maidenhead – particularly as following this game, league action will be suspended until the 21st due to Fleet’s Buildbase FA Trophy clash at Kidderminster in between (Wealdstone, too, have a tough Trophy trip next week, away at Southport).

Fleet took over the mantle of closest challengers to the Magpies after leapfrogging St Albans City to move into second place for the first time since early November and it’s a position McMahon will be looking to consolidate as he sets his sights on one win at a time.

In the blue corner, however, Wealdstone will be aiming to dent that ambition. Having won one and lost one against Maidenhead over the Christmas period, the Stones have a similar 10-point gap to breach if they are to get back among the play-off pack.

Having begun the season well, Gordon Bartlett’s side began to come unstuck after the defeat at Stonebridge Road in September and went on to win just three of their next nine league matches. Yet having beaten Maidenhead in both the Trophy and league, as well as East Thurrock United (a tough nut to crack this season) and drawn away at in-form Poole Town, Wealdstone seem to be turning a corner as 2017 dawns.

Top scorer Elliott Benyon is still a major threat, having scored 15 in the league this season, and he’ll be getting some help from new signing Nathan Mavila, the former West Ham and Maidstone striker having returned to Wealdstone earlier this week. Since our September game, Stones have also recruited Fulham full back Ryheem Sheckleford on loan and midfielder Nick Freeman from Wycombe, also on loan.

Usually buoyed by a boisterous home crowd, Wealdstone have lost five games at The Vale this season but four of those came in successive league games from September to November. In 2015/16, Fleet triumphed 2-1 in an early-season encounter after coming from behind with goals by Jordan Parkes and Danny Kedwell.

*Supporters please note that during the winter months, the Wealdstone car park is for players, officials and sponsors only. There is plenty of street parking  the ground, but please do not park over driveways or with wheels on the pavement. The wardens have a field day on matchdays!

Ed Miller has been Ebbsfleet United's communications manager and programme editor since 2014 and responsible for the club website since 2007. Contact him on ed.miller@eufc.co.uk
PrevPreviousCrossbar Challenge, Part Two…
NextWealdstone 2-4 FleetNext