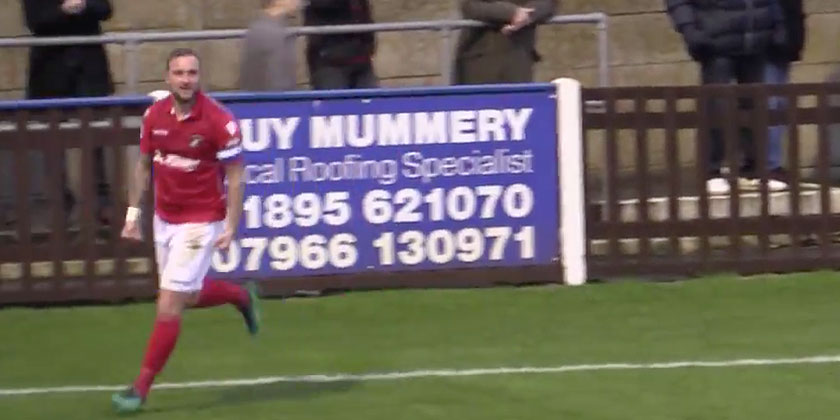 Fleet banged four goals past Wealdstone for the second time this season to complete a first double in 2016/17 but the home side pushed them all the way with the result still in the balance until Sam Deering’s late strike confirmed the three points. A goal in time added on would usually have been the talking point of such a match but three goals in a crazy four minutes at the beginning of the second half trumped that.

Daryl McMahon made just one change bringing Marvin McCoy in on the left side against his former club in place of Sean Shields. And McCoy’s willingness to get forward whenever possible saw him chalk up two assists in the process.

The visitors started the game on the front foot and with their first attack could have been in front. Anthony Cook intercepted a stray pass from midfield, found Danny Kedwell out right and his ball inside to Jack Powell was rather pulled wide by the former Millwall man and didn’t trouble goalkeeper Jonathan North.

Fleet looked like they were going to stamp some early authority on the match, getting the ball wide and getting first to every tackle but Wealdstone soon summoned up more resistance and looked the more likely to score for a 10-minute spell.

The Fleet defence lost Elliott Godfrey inside the box from a Johnny Wright cross but his header was low and wide from a good position. Danny Green then had two chances, one blocked at the near post and the second moments later when Ricky Wellard’s supply was perfect but the resulting shot from eight yards was way too high and Fleet escaped.

After withstanding a succession of corners, Fleet mustered a few set pieces of their own. On 13 minutes, a Jack Powell corner was met firmly by Dave Winfield at the far post and only an excellent one-handed stop from North denied him a goal.

Winfield wasn’t to be thwarted for long, however. A minute later, McCoy launched a long throw into the box and Winfield powered on to it and directed a header into the far corner for 1-0.

The visitors then set about proving they were worth that lead with a succession of decent chances created. On 20 minutes Drury found himself in space after an errant pass and powered through the middle, laying the ball out left into the path of Cook whose shot was rather too straight to fool North and the goalkeeper blocked it.

Kedwell then found himself on the edge of the box and did very well to sidestep his marker and get a shot on target which North only managed to push back into play. Drury was on to it and his rising shot unfortunately cracked off the crossbar with Fleet fans already celebrating what they thought was the second goal.

Shortly before the half-hour mark, Drury was again unfortunate when his floated cross almost caught out the goalkeeper as it zeroed in on the upright corner but North got a hand to it and pushed it aside. And another great chance came and went when Kedwell’s ball across the box to Kenny Clark saw the defender lunge at it but without a clean connection and the goalkeeper watched it go wide.

After that spell on top, the Fleet were again pushed back by the Stones, whose Fulham loanee Ryheem Sheckleford was doing some great work down the left flank. Green whizzed a free-kick just over the bar despite a Wealdstone handball in the lead-up to the set piece but the Stones got their reward four minutes before half-time. Fleet didn’t clear an initial cross and Eddie Oshodi was allowed to get a second effort into the six-yard box. It seemed Nathan Ashmore had done enough to keep it out but the ball bounced awkwardly and Mark Phillips couldn’t step over it, succeeding only in diverting it over the line.

Fleet introduced Deering for Powell as the second-half began and the substitute had an immediate impact. With less than a minute on the clock, he found McCoy on the right who scampered past the covering Wealdstone defender and delivered a deep cross towards the far post. Kedwell timed his jump perfectly and managed to head the ball back across North and into a gap to give Fleet the lead.

But it lasted less than 60 seconds as the Stones grabbed a messy equaliser. Sheckleford was fortunate to see his cross divert off Dean Rance into the path of Green. The midfielder swung the ball into the six-yard box past Ashmore and Wright managed to get a foot on it ahead of Clark to send the ball over the line for 2-2.

With Fleet fans still cursing their luck in conceding an equaliser so swiftly, the home supporters must have been livid at what happened next. With the PA still announcing the Wealdstone goal, Deering set Cook free and his cross towards Bubb was inexplicably intercepted by David Hunt who stuck out a foot and guided the ball past his own goalkeeper.

Understandably, both sets of defences looked petrified for a time whenever the ball came near them but the match soon settled into a more low-key pattern. Bradley Bubb almost got free to deliver a lob over North that hit the crossbar but he was infuriated to be pulled back by a linesman’s flag. The Fleet striker almost got a fourth moments later when he wriggled clear, managed to sidestep North but saw Liam Goulding on hand to beat him to it eight yards out.

Tempers threatened to boil over on the hour when Cook, having been denied a foul when upended by Wright, took matters into his own hands seconds later and buried the Wealdstone player into the sidelines. The referee took a dim view of it, but fortunately for Fleet the colour of his displeasure was only yellow.

Green then burst through the Fleet midfield and evaded three tackles, sprinting into the penalty area but meeting a brick wall in the form of Winfield whose interception was vital. At that point McMahon decided to add a little more steel in midfield, bringing off Drury and adding Stuart Lewis to the fray. Darren McQueen followed for the industrious Bubb minutes later.

Phillips and Rance saw yellow and Lewis made another important tackle as Wealdstone enjoyed the bulk of possession in and around the final third. Top scorer Elliott Benyon fired over the bar and the Stones had a half-hearted appeal for handball as they forced numerous corners but failed to get too much on target.

With 10 minutes to go, Fleet couldn’t clear their lines quickly enough without the Stones sending in another ball. Ashmore pounced on one corner, diverted another into space only for Omar Koroma to elicit groans from the home following by stabbing the ball wide. In time added on, it was real hearts-in-mouths stuff as Ashmore dived on top of one loose ball from a corner and then there were loud shouts for a penalty when Oshodi was pushed but Fleet hung on.

And then, in scenes that recalled the 2011 play-off final, Fleet sealed a 4-2 win at the death. With Wealdstone pressing, Winfield got the ball clear, McQueen burst upfield and held off Sheckleford long enough to get a shot on target. North saved it but couldn’t gather it and Deering was following up to sweep it over the line for a most memorable 4-2 win.

Ed Miller has been Ebbsfleet United's communications manager and programme editor since 2014 and responsible for the club website since 2007. Contact him on ed.miller@eufc.co.uk
PrevPreviousFleet refuse to look beyond The Vale
NextSponsorships fly out of the FleetNext