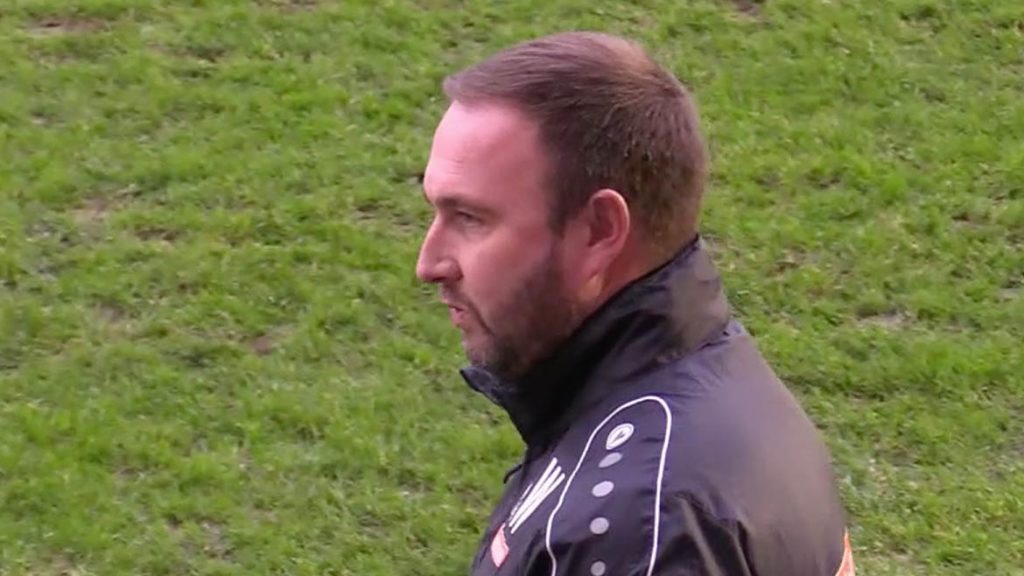 Fleet not ruthless enough for Watson

Kevin Watson says his side could learn a thing or two in game management from Dover Athletic after the Fleet could find no way through the visiting defence on Saturday.

“It’s our own fault for getting in the positions we got and not being ruthless enough,” said the Fleet boss. “It’s the first game we’ve not scored in since I’ve been here. I fully expected us in the second half to score but it wasn’t to be and it’s another game down, a defeat.”

Fleet created chances in the second half but Dover were effective in shutting down the game and, having seen a lead evaporate at Dagenham the match before, Watson says that’s something his side need to adopt.

“Dover did try and slow the game down, I know Hessy will say they haven’t, I know him very well,” said Watson. “But both full-backs got booked for varying reasons, the right-back for time wasting, I thought the keeper took his time but that’s game management which we can learn from.

“I’m not saying for us to take that much time to get players booked, but taking the sting out of the game when the other team’s on top which they’d done a couple of times. We need to learn how they’ve ground it out. They rode their luck on several occasions but fair play to them.”

Away from the game, much of the talk amongst home fans is about what the club can do to strengthen going into the final months of the season and that’s something Watson has been at pains to address.

“I’ve said all along, you can identify players, you can want players, it’s whether they’re going to want to come and scrap at the bottom of the league,” he explained. “So it’s easier said than done but we are trying.

“You can  see from the loan boys that we have that they’re all in it together, Tyler, Payney, Reidy, playing out of position today because I needed Ayo in the centre of the pitch to stop the ball into their centre forward. They’re all up for a fight and if any player comes in, they’ve got to be aware they’re up for a fight. We are in a scrap, it’s as simple as that.”

John Goddard’s return has given the manager another option and it’s a welcome return to the midfielder, but Watson knows it’s not as simple as waving a magic wand.

“He’s that little bit of calmness, he plays like he’s got all the time in the world but that’s because he knows where he’s at, what’s around him before he even receives the ball. He was excellent when he came on again but you can’t start him at the minute because he’s been out for so long. But 20 minutes, half an hour here and there, and he will be key for us going forward.”

Fleet lost Saturday’s game in the opening quarter of an hour and the boss was unhappy that matchwinner Michael Woods was able to direct a shot on target for the only goal.

“We didn’t get tight enough in the box, didn’t make a tackle and allowed someone to get a free shot off inside our box. They’ve probably had a 50% conversion rate from one of their two shots this afternoon. [After that] it was one-way traffic. I think they’ve had one effort on the break in the second half. Words fail me.”

And Watson is under no illusions about the size of the task facing his squad with wins ever more paramount as games tick by.

“They’re all must-win now. It’s a case of keep picking up points, keep ticking over – in the cold light of day, you’re just dragging more teams in if you keep adding to your points tally, even if they’re one point, you’re adding while the others are not getting any. So this is a blow, bragging rights go down to the coast but I liked what I saw in the way we played, we just need to turn that into a positive result.

“Those draws we’ve had we need to turn into wins and that today would have needed to turn into a draw. Dagenham here will be no different, you know what you’re getting week in, week out. We had a chat in there, I’ve said I don’t want you looking at league tables now. I don’t want you thinking and dwelling on this result, we’ve lost but you’ve got to take that performance after the first 15-20 minutes into the next game. And into the game after that and the game after that.

“It’s not many defeats since we’ve been here. We’ve had too many draws, we had a chat about why that’s been happening, possibly human nature that we’re down the bottom: you try to hold on to 1-0s when you’ve been in the lead like in I think four out of the five times we’ve drawn.

“I want them go out and express themselves and start games as if they’re 2-0 up, have a little swagger about them. If you came here today, you wouldn’t have thought we were down at the bottom of the league, you’d have said the teams were in opposite positions.”

For all the disappointment of losing his first Kent derby, Watson had few complaints about the performance and endeavour his side showed after going behind.

“Arguably as good as we’ve played but we know football is a very funny game,” he said. “We’re all extremely disappointed because we’ve played worse and won games. Wrexham we played a lot worse than that and won, Chorley first-half we were poor to come in 2-0 up but that there, I can’t grumble.

Ed Miller has been Ebbsfleet United's communications manager and programme editor since 2014 and responsible for the club website since 2007. Contact him on ed.miller@eufc.co.uk
PrevPreviousFleet 0-1 Dover Athletic
NextVideo highlights: Dover AthleticNext