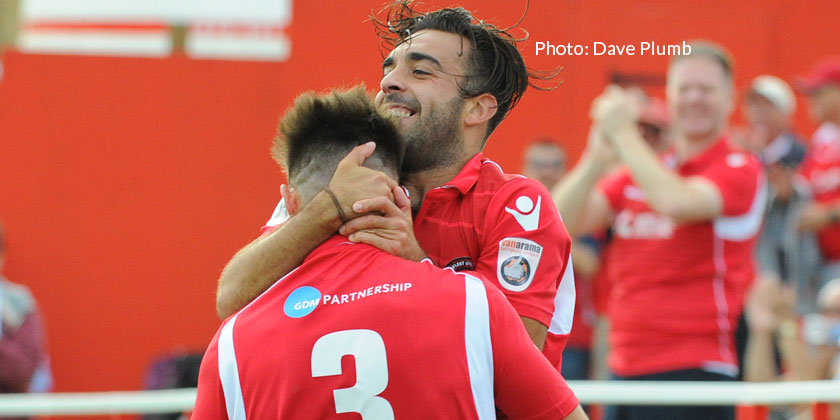 You could accuse Fleet fans of being greedy for expecting another goal rush against a team like St Albans City – but they were treated to three in 21 minutes (and one of those inside either eight or 12 seconds depending who timed it) as Fleet moved into fourth place and above their opponents.

Daryl McMahon’s side won the game before the first 25 minutes were out and a shellshocked City could never quite get up a head of steam after that to claw back their deficit.

Fleet had three changes from the side that beat AFC Sudbury, with Nathan Ashmore returning in place of Jonathan Miles, while Mark Phillips and Stuart Lewis came in for Kenny Clark and Dean Rance respectively.

Nobody could have dreamed of the start Fleet got as St Albans kicked off and straight away lost the ball with Sam Deering picking it up inside his own half and then launching a quite wonderful shot that went sailing over the despairing figure of goalkeeper James Russell to nestle in the back of the net.

In an all-action opening 60 seconds, City then roared back with Dipo Akinyemi who had clear sight of goal but couldn’t get his effort on target. Fleet could have made it 2-0 on four minutes, when Sean Shields got round the back against his former club, fed Darren McQueen who should probably have let fly himself but he squared it for Stuart Lewis whose shot from eight yards was blocked.

With Lewis full of energy and Deering snapping at the heels of everything in midfield, City couldn’t settle and found Fleet harrying their back line at every opportunity. The visitors did enjoy a good spell of possession, however, and from a succession of corners, Josh Hill had good sight of goal but powered his header just over the bar.

Before they could get into any rhythm, however, Fleet rocked them back on their heels again. Lewis driving from midfield again on 14 minutes was the supply line with a fine through ball and McQueen just accelerated away from his marker to find some space and the young striker finished with great confidence past Russell for 2-0.

And seven minutes later it was 3-0 as the remorseless Fleet machine kept coming forward. This time, City were caught dawdling as they attempted to clear their lines and McQueen’s persistence got the ball out wide to Shields. He put it into Kedwell’s path, who in turn played in Deering running beyond the last defender and he struck a shot beyond Russell.

As ever, McQueen’s pace continued to unsettle his much bigger marker and the Fleet No.10 was almost through for a fourth on 26 minutes and then seven minutes after that he was in space on the right side of the box to draw a decent save from Russell.

At the other end, Phillips was forced to head a Scott Thomas cross over the bar while Reiss Greenidge hardly put a foot wrong against the prolific Louie Theophanous, keeping a free-scoring City forward line quiet for much of the afternoon.

Midfielder Matt Ball flashed a shot wide from a good position and Ashmore had to punch a dangerous cross clear from his six-yard box, clumping Marvin McCoy in the process as he did so, but St Albans didn’t appear likely to take advantage of the Fleet defence.

After such a blitzkrieg opening, it was little surprise that the second half was a much tamer affair and though the visitors made a good stab at getting back into it, Fleet managed the remaining minutes very well. After a quiet first half, Cook saw more action down the right and on 55 minutes he laid a superb delivery onto the penalty spot for Kedwell but he was off-balance and he sent the effort over the bar.

Lewis then almost set McQueen free again but as the ball was cleared upfield, City shifted play to the right flank and Akinyemi found space to unleash a decent drive that gave Ashmore little chance as it flew across his body and into the net.

With half an hour left, Fleet could have gone introspective and allowed City to press forward, but Deering and Lewis in midfield kept the momentum on the front foot for the most part and the visitors couldn’t apply much pressure. Shields, who had been kept under wraps by George Casey, was able to get behind the City line on 61 minutes, finding McQueen 10 yards out whose shot was blocked and hacked clear.

Another Cook-Kedwell combination then saw the latter head beyond Russell but the cheers caught in Fleet throats as the assistant referee’s flag went up. Jack Connors and Rance came on to shore up the Fleet resistance  and the home side kept the pressure on, Kedwell just slower to a Lewis cross than Russell who was forced to palm the ball behind for a corner.

With 71 minutes on the clock, McQueen ran on to Kedwell’s cushioned back header and went down under Hill’s challenge but the referee was unmoved by vociferous appeals for a penalty. He was quicker into action moments later when Cook accelerated at pace on the break. As he crossed the halfway line, Tom Bender came across and upended him, earning a straight red card for his efforts.

That knocked the last fight out of the Saints and Fleet could have added a fourth when Deering’s placed shot went just wide of the upright. Charlie Sheringham’s introduction in time added on almost produced a goal; first, the substitute fired wide from Lewis’s lay-off and he then twice turned supplier, with Deering so close to a hat-trick as he sent a pass frustratingly wide of the far post.

Ed Miller has been Ebbsfleet United's communications manager and programme editor since 2014 and responsible for the club website since 2007. Contact him on ed.miller@eufc.co.uk
PrevPreviousFree-scoring Fleet face a slicker City
NextManager’s Notes 24.09.16Next