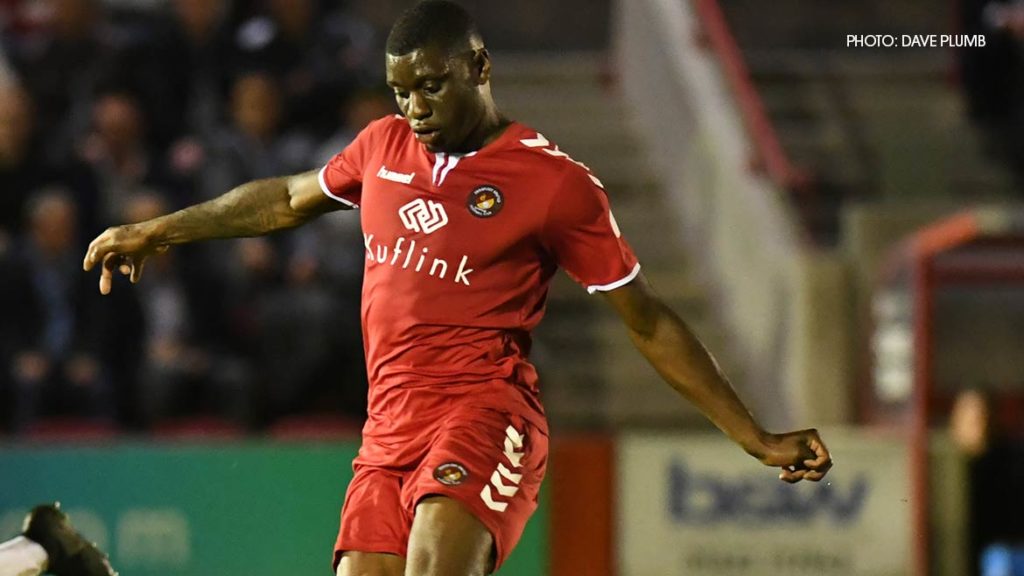 Hopes of more points at home remained just that as they were dashed by an exuberant Torquay side who conjured up two early goals in each half to render Fleet’s late rallies ultimately futile.

Josh Umerah gave Fleet hope of a revival with a first-half goal but familiar frailties after the restart broke the back of the home side’s resistance.

Umerah returned to the starting lineup in place of Alfie Egan while another new face was on the bench in the form of left-back Andre Blackman who had last played for Southend United. And Umerah almost got in ahead of goalkeeper Lucas Covolan inside the first four minutes in a rare forward moment for the Fleet.

Yet after that it was a familiar sight for home fans who found their cheers stuck in throats as their side was given a mountain to climb by quickfire Torquay goals.

As at Harrogate, the opposition targeted the flanks and Ben Wynter and Ben Whitfield got forward down the right to torment the defence early on.

Lively and keen, Torquay kept the Fleet penned in and made the most of their attacking verve down the right with the opening goal on eight minutes. It was Whitfield whose pace created space on the flank and he zipped a low cross to the far post where Jake Andrews showed good technique to slide in and get sufficient power on an effort to arrow it away from Jordan Holmes into the opposite corner.

Fleet struggled to live with the visitors’ midfield in the opening 20 minutes and the Gulls enjoyed possession and space to attack. Fleet mustered one corner but on 24 minutes, Torquay had their second. This time it came down the left, goalscorer Andrews laying off a pass inside to Jamie Reid. The top scorer reversed his run to take out the nearest defender and promptly let fly out of the reach of Holmes.

The goal did sting the home side into action and Alex Reid tried to respond instantly with an effort blocked behind. Frankie Sutherland found Umerah and Weston dropped a cross into the box as the Fleet rallied.

And Umerah pulled one back on 34 minutes when Fleet broke swiftly upfield with their best football of the game, working the ball to Reid who in turn found the No.12 to pick his spot past Covolan.

Having looked dead and buried up to that point, Fleet must have been disappointed to hear the half-time whistle as they ended the half on top, Reid whistling a shot just over from Josh Payne’s supply.

But just as in previous games against the likes of Yeovil, Notts County and Barrow, any thoughts of a response were dashed within minutes of the second-half getting under way.

Torquay attacked wilfully once more, a cross from the right shepherded away but only as far as Andrews whose shot towards the six-yard box was blocked by Holmes but then turned home by Matt Buse.

Alex Reid had an effort at the other end that Robbie Cundy blocked but Torquay extended their lead to 4-1 on 54 minutes. They built well from midfield and a quick exchange of passes saw the ball worked into the box where Liam Davis stabbed home.

The Gulls relaxed a little and Fleet began to gain more possession as the game headed towards its close. Blackman and Tomi Adeloye added a little spring to the home side’s step and 10 minutes from time Umerah reduced the arrears once more with a brave header across Covolan’s goal from Myles Weston’s cross.

Unlikely as it seemed, Fleet might have staged a shock revival after Adeloye’s run picked out Frankie Sutherland but he blasted over and there was a strong penalty claim after Ugwu was manhandled in the box. Umerah could have had a hat-trick in the final minute as well when his strength took him past one defender and he smashed a shot on target that was cleared off the line.

That said, Torquay thought they’d added a fifth when Vincent’s excellent shot cannoned off the underside of the bar and down over the line. Holmes quickly threw it clear, though it was debatable whether the officials were convinced one way or the other about whether the whole ball had gone over. Not that it mattered to either side particularly by then as the clock ticked down with Torquay still in command of a two-goal margin.

Ed Miller has been Ebbsfleet United's communications manager and programme editor since 2014 and responsible for the club website since 2007. Contact him on ed.miller@eufc.co.uk
PrevPreviousBlackman added to Fleet squad
NextThere’s too much charity in our defending, says gafferNext