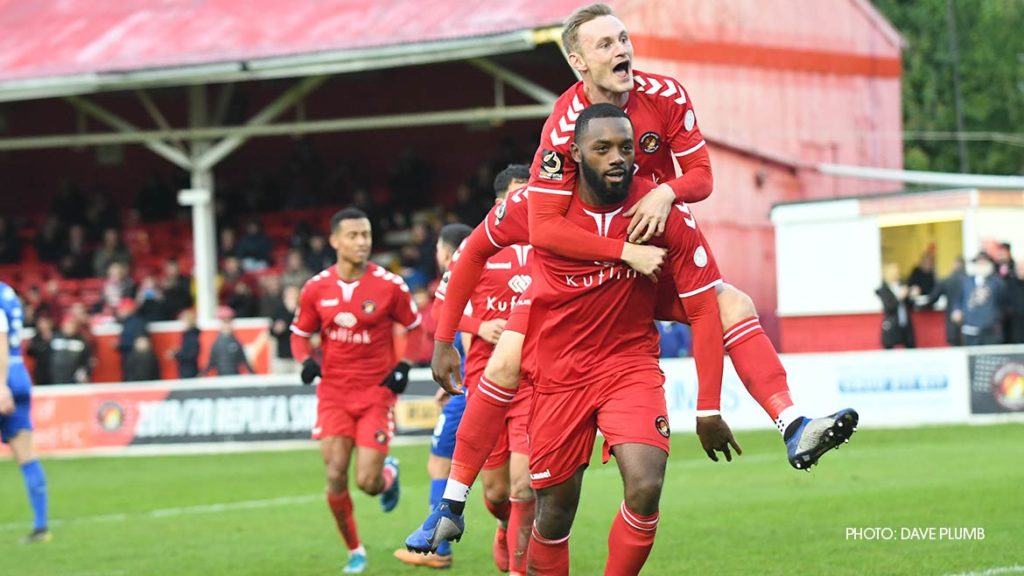 Gozie Ugwu might not have scored goals in a blue shirt but he got two against them this afternoon to bring his total to five in the last three games.

Fleet came from behind and then led in the second half as they secured a useful point, these two in-form sides slugging it out in an enjoyable game in tough conditions.

There was one change for the home side with Jamie Grimes in for the suspended Jack King, meaning Myles Weston took the armband. And in goal, Harry Palmer kept the gloves with Jordan Holmes given an extra few days to fully recover from his concussion as a precaution.

Rain for much of the morning had made for a heavy pitch, although conditions had eased at kick-off. However the Fleet got off to something of a sticky start, a couple of slips on the surface threatening to allow Chesterfield through on occasion.

And the visitors almost got their noses in front on six minutes when Fleet were second to the ball in midfield, allowing Joe Rowley to pick up the scraps and play in Jonathan Smith. His shot from the edge of the box skipped past Palmer and bounced back off the foot of the post.

Fleet weren’t troubling the Chesterfield goal, though Frankie Sutherland wasn’t far off from bringing down Tyler Cordner’s weighted pass into the box.

But John Sheridan’s side went in front with only 12 minutes on the clock. Again they were allowed to build from midfield and Gevaro worked an opening to shoot at goal. Palmer could only stop the ball from reaching the target but it spilled forwards for Scott Boden to tidy up and he converted with ease.

Earlier in the season that sort of goal might have signalled a Fleet collapse but to be fair to Kevin Watson’s men, they picked up and were back in it four minutes later. Weston attacked from the right and his low delivery may well have been intended as a shot. Either way, it bounced back off the post and with goalkeeper Shwan Jalal flailing, Ugwu reacted ever so quickly to follow up and steer the ball home for the equaliser.

If the first 15 had belonged to Chesterfield, the home side upped the tempo for a spell. Cordner wrong-footed Rowley at the back to find Josh Payne and he swept play wide to Weston who tried his luck with another shot that went closer than its initial flight suggested.

If Fleet were guilty of anything, it was overhit crosses in the windy conditions and both Weston and Ugwu sent balls into the terracing from good positions.

On 27 minutes, Alex Reid broke down field and supplied Ugwu who slipped in a return pass for Reid that wasn’t far short. Eight minutes later, Reid snapped at a Weston pass that Jalal did well to block before the heavens opened and the skies darkened.

At that point, both sides would have been happy for the half-time whistle. Chesterfield had one more chance when a freak high ball seemed to go out of play before curving back into the Fleet half. Rowley broke and eventually the very busy and impressive Cordner had to hook away from the near post. Smith then glanced a header just wide of the home post.

Fleet ended the 45 minutes well and from another one of Weston’s raids down the right came chances for Reid and Ugwu who saw shots blocked before Sutherland fired the third chance over the bar.

And Cordner made one more telling pass from the back that set Reid free as the striker trapped and turned with great poise but he was manhandled into submission by two Chesterfield defenders.

Chesterfield were forced into a goalkeeper change as the sides emerged for the second period, Jalal presumably injured and he was replaced by Luke Coddington.

And he was picking the ball out of the net within seven minutes of the restart. It was a goal for the Fleet created out of nothing more than sheer persistence by Weston.

It seemed the attack had broken down but Weston raced around his man to follow up on the ball and as he attempted to switch position and cut into the box, Haydn Hollis came across and felled him right on the edge. It seemed referee Alan Dale had initially given a free-kick but he eventually pointed to the spot.

For the second Saturday running, Ugwu was the man with the responsibility. He did well to ignore the highly distracting antics of Coddington on the goalline and his short run-up was followed by a confident strike into the back of the net.

As in the first-half, the lead didn’t last very long, however. Three minutes later, Chesterfield were awarded a free-kick from a dangerous angle on the right flank. It was whipped in and the tall figure of Hollis was there to guide the ball into the bottom corner.

Rowley had a glorious chance to make it 3-2 shortly afterwards, Mike Fondop’s driving run and shot curling back out to the Chesterfield midfielder who blazed over.

On a couple of occasions it needed the boot or head of Grimes to intervene, particularly when Spireites sub Anthony Spyrou got away down the middle only seconds after entering the pitch.

But Fleet didn’t sit back and maintained a good tempo, particularly going forward with Albie Morgan more involved to pick out Ugwu and Weston in particular.

Twelve minutes from time the conditions played their part again as furious wind and unkind bounces entertained fans but bemused the players in one passage of play. It actually resulted in a good Fleet chance, a cross falling for Reid with his back to goal then coming back out to Alfie Egan whose pass wide to Weston ended with a dipping attempt off target.

And 10 minutes from the end came the best chance for the points, the impressive Andre Blackman breaking quickly and supplying substitute Josh Umerah with a ball to feet beyond the last defender. Umerah was through on goal but Coddington did well to advance and deny him with an outstretched leg.

Neither side gave up the ghost, both looking to take the three points but one apiece was a fair takeaway on the final whistle.

Ed Miller has been Ebbsfleet United's communications manager and programme editor since 2014 and responsible for the club website since 2007. Contact him on ed.miller@eufc.co.uk
PrevPreviousKevin Watson appointed to manager’s job
NextChances there to win the game, says LewisNext