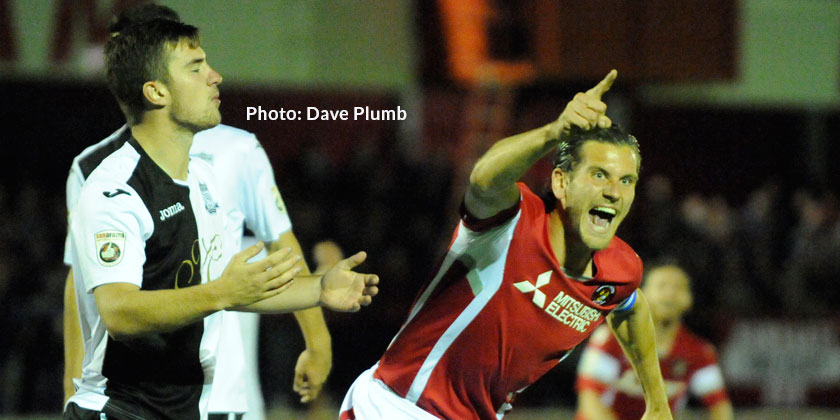 Fleet maintained their wonderful winning streak and extended their lead at the top to nine points after seeing off a decent challenge from Weston-super-Mare – and this time the floodlights couldn’t stop them.

As consistent as the results this season has been the starting line-up and Daryl McMahon once again named an unchanged eleven. It didn’t take Fleet long to get into their passing stride and a foul on the edge of the box provided the first opportunity, Danny Kedwell driving the free-kick much like he does his penalties, down the middle, forcing Luke Purnell to push it over the bar.

Fleet had the territorial advantage established early on though Weston held firm against the many breaks from midfield in and around their box. Joe Howe was the next to carve open a chance, feinting into the box from the left flank on seven minutes and his speedy low delivery whistled past the post and the outstretched leg of Kedwell. Stuart Lewis then hooked a shot just past the upright from Jordan Parkes’ corner as the one-way traffic continued.

Weston stemmed the flow somewhat from the quarter-hour mark, with Joe McClennan down the right flank and Jake Mawford through the middle looking effective. Dayle Grubb had space to shoot but he snatched at it and over it flew, while Tom Bonner had to be alert on two occasions as Scott Wilson hovered around looking for scraps  in the penalty area.

Fleet broke the deadlock on 20 minutes, however, as Matt Fish got a cross into the danger area and Weston failed to clear their lines. It allowed Parkes to eventually stab the ball back across goal and Kedwell reacted quickest to turn it over the line from close range.

Godden had Fleet’s next chance on the half-hour when he slid in with great technique only to see his shot graze the post. Either side of that, Weston continued to pose a few problems and Ollie Barnes’ looping header had Brandon Hall scampering back and reaching high to divert the ball over the bar.

Kedwell finished the half with another effort, hitting a firm shot just wide of Purnell’s near post with Fleet certainly good value for their one-goal lead.

Two minutes after the break, Fleet could have made it two. A lapse in concentration as neither Barnes nor Jacob Cane seemed to claim responsibility for a clearance allowed Godden to race through behind them and he advanced on goal, slipping a low shot agonisingly wide of the far post.

That miss was forgotten three minutes later with an unlikely scorer putting the Fleet 2-0 ahead. A free-kick found home skipper Bonner lurking just inside the box and he coolly despatched the ball with all the poise of a seasoned striker.

Fleet looked home and dry and the 2,045 inside the ground were primed for more goals. They got one, but it wasn’t the one they expected. It arrived on 67 minutes, courtesy of Bulgarian substitute Tsvetan Filipov – immortalised on talkSPORT earlier in the day – with a strike out of the blue as the Fleet defence stood off him and allowed him to get the shot away.

Coasting towards the victory at one point, now Fleet weren’t quite so assured and Dayle Grubb’s shot across Hall’s goal from a similar position to Filipov’s strike was fair warning that a positive result was by no means a foregone conclusion.

Fleet decided that attack was the best form of defence, however, and they got a spring in their step again. John Paul Kissock’s goalbound shot was blocked by Godden, who spun around and hit the rebound himself but it flew over the bar. Parkes then twice tested the Weston defence, forcing Purnell into a fingertip save and then drilling a low cross through the six-yard box with enough force that any touch would likely have sent it over the line.

Weston didn’t really pose too many problems after that but the final 10 minutes were nervous ones nonetheless for Fleet fans as the visitors never seemed content to lie down until the very welcome final whistle.

Ed Miller has been Ebbsfleet United's communications manager and programme editor since 2014 and responsible for the club website since 2007. Contact him on ed.miller@eufc.co.uk
PrevPreviousMacca makes his talkSPORT bow
NextThird coach booked for Chelmsford gameNext