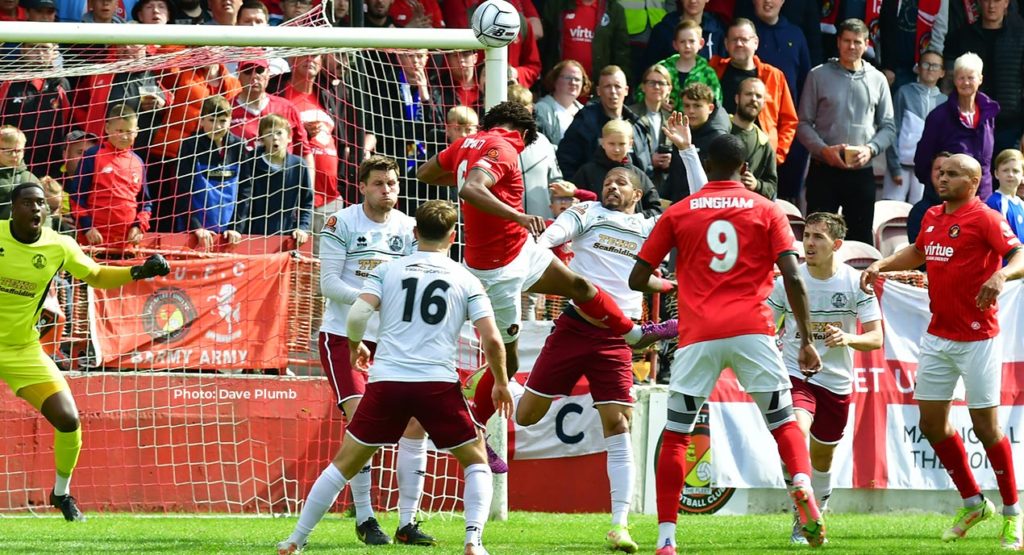 Fleet won the battle for third place that takes them into an extended campaign at the semi-final stage as the curtain closed on the regular 2021/22 season at the Kuflink Stadium this afternoon.

Goals from Sido Jombati – his first for the club – and Rakish Bingham were enough to see Fleet past Chelmsford and their late Charlie Sheringham reply, all of which meant the seven goals that Dartford managed at Eastbourne made little odds in the end as Dennis Kutrieb’s side secured third place with two points to spare.

The last Fleet side to finish third at this level was the promotion side of 2010/11 – four of whose squad members were in attendance at a parade of former players – and this Fleet team will now seek to emulate that, starting on Sunday against the winner of the Dartford-Chippenham eliminator.

And the visitors, with nothing to play for, clearly didn’t feel that way with an attacking lineup that began positively, Fleet understandably a little tentative in the opening spells. It was the Fleet who had the first chance nonetheless when player of the year Ben Chapman got forward down the right and crossed for Romain who saw his effort blocked in the box.

Chelmsford went closer still on 12 minutes when Deon Moore let fly with a shot from 30 yards that sped just wide and followed that up with Simeon Jackson on the counterattack supplying Tom Blackwell for a weighty effort that was smashed at Moulden with some force.

There was little rhythm to the first-half and when Fleet did find a pass behind the Chelmsford line, such as Paxman’s shot from Chapman’s delivery on 23 minutes, a lack of power on that made things easy for Kai McKenzie-Lyle in goal. The same applied when Paxman’s pass inside to Craig Tanner got him a sight of the target but he was barged aside by Ade Oluwo with half-hearted shouts for a penalty.

Paxman was the supplier again on the half-hour, this time for Shaq Coulthirst who rolled a low-powered effort goalwards that McKenzie-Lyle almost misjudged before stretching to touch it behind for a corner.

Fleet’s best effort of the half came with Romain’s 32nd minute drive flashing across the face of goal before Tanner played in Bingham but the Fleet’s No.9 had it on his wrong foot and could only send the ball wide. Coulthirst finished the half with two small opportunities but it was little surprise things were goalless at the break.

They shouldn’t have remained so in the first minute following the restart as Tanner blasted a shot that seemed goalbound before it was somehow blocked by Louis Dunne as it arrowed towards goal.

And with news that Dartford were piling up the goals on the south coast, Fleet struck at just the right time to alleviate any angst on the terraces. The opening goal came on 49 minutes, Tanner’s delivery into the mix met by the head of Jombati at a stretch as Fleet found success once more from a set piece.

And one became two four minutes later. It was Bingham who took all the credit, racing into space as Wood’s upfield ball bounced off a Chelmsford head outside the box. Bingham’s quick shimmy as Coulthirst pulled the defence with him opened the gap to despatch a clinical effort into the bottom corner for 2-0.

It seemed the home side might coast towards full-time with that two-goal cushion. A flurry of substitutions interrupted what flow there was to the game, although Moulden had to be alert to tip away substitute Freddie Hockey’s cross.

With most of Chelmsford’s half chances clearing the bar, there didn’t seem to be too much danger in the air until, with 20 minutes later, City sub Dara Dada pounced on Alfie Egan’s possession and had space to cross to present Sheringham with a mere tap-in.

It was a long final period as Fleet supporters watched on awaiting full-time, though in truth their side had few real moments of fright bar Hockey being sent clear of the Fleet defence only to find Moulden in good form.

And that was Fleet’s 75th anniversary season completed… other than, of course, the small matter of next Sunday’s play-off semi-final which will be either a tantalising North Kent derby or a quick repeat visit from Chippenham Town.

Ed Miller has been Ebbsfleet United's communications manager and programme editor since 2014 and responsible for the club website since 2007. Contact him on ed.miller@eufc.co.uk
PrevPreviousSeason-ticket extravaganza at Ebbsfleet
NextPlay-off matchday operationsNext