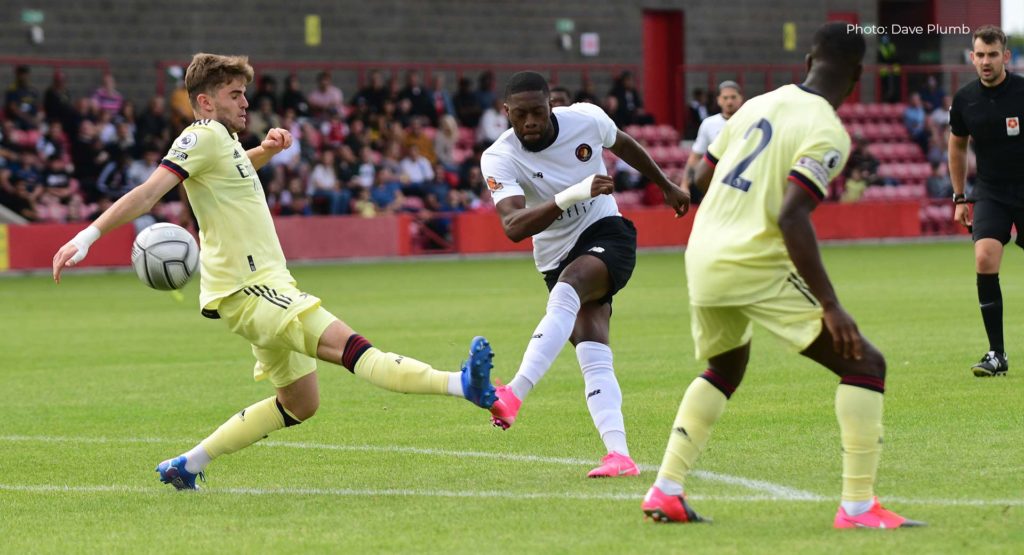 Arsenal’s young stars-in-the-making entertained the Kuflink Stadium crowd on an afternoon when the Fleet’s fourth scheduled home summer friendly overcame any threat of rain and played out to its conclusion.

That conclusion was a fine win for the young Gunners but the scoreline would need to be taken into perspective given some of Per Mertesacker’s young players were hugely technically gifted, and many of them not a million miles from knocking on the door of the first-team squad.

In Miguel Azeez, who capped a sterling performance with a belter of a goal, and Omari Hutchinson, Arsenal had players who could hurt the Fleet even if the home side had the edge physically.

In the past week, Azeez has taken part in a first-team friendly against Watford and scored another sublime goal in that one, with Arsenal media already anointing him as the next big thing to step out of the academy and into the big time.

With one half of football under their belts this week following the QPR abandonment, Fleet rung a couple of changes with Tobi Adebayo-Rowling, Christian N’Guessan, Will Wood and Adam Mekki returning to the starting lineup.

And it was Wood who laid on the first chance, heading down a ball for Craig Tanner to lash goalwards but Hubert Graczyk was down well to keep that out.

Arsenal’s intent was clear to see two minutes later as they opened the scoring courtesy of Zak Swanson. A former teammate of Bukayo Saka’s at youth level, Swanson received the ball from a crossfield move, cut in and let fly, wrapping a shot towards the target and away from Chris Haigh’s outstretched arms.

But Fleet fought back within six more minutes, Will Wood’s interception on the halfway line and strong run releasing Rakish Bingham for a surge into shooting range capped by a neat finish into the bottom of the goal from 18 yards.

Fleet had a shout for a penalty when N’Guessan went to ground on the half-hour mark and Graczyk had to be on hand to whip away a short Zane Monlouis backpass that ran short invitingly for the Fleet forwards.

But again a good Fleet opportunity was followed by a clinical Arsenal finish. Their second arrived on 37 minutes, Mazeed Ogungbo’s run down the left swept into the box for Khaylon Edwards who bundled it home under pressure from Kreshnic Krasniqi.

Mekki departed after treatment to be replaced by Alfie Egan and just before half-time Joe Martin went agonisingly close with a header that flew just wide of the target.

Several half-time substitutions later, Fleet were back on the attack within seven minutes, one of those subs – Sido Jombati – involved in some good interplay with Egan and Adebayo-Rowling, but his cross ran long, evading the incoming white shirts.

The visitors made it 3-1 on 56 minutes when Arsenal were quick to close down a Fleet pass out from defence. Ben Cottrell’s one-two with Edwards with swift and decisive and saw Haigh spread himself to make a good save but he could do nothing about the loose ball which Cottrell pounced on to convert.

There was warm applause in the crowd for some of Arsenal’s skilful approach play and they saved their best for last as that man Azeez found the fourth. On 67 minutes, he sauntered from a wide position into the middle of the pitch and curled a beauty from a distance outside the box, leaving the Arsenal aficionados in the crowd purring and nodding knowingly.

Haigh made another good stop towards the end as Hutchinson released substitute Brooke Norton-Cuffy before Fleet had a late chance to reduce the arrears. Dominic Poleon held up play to supply Elliott Romain, who was impeded by replacement goalkeeper James Hillson as he lined up to shoot but Greg Cundle’s penalty was watched all the way by the goalkeeper who pushed it away to protect the 4-1 lead.

Fleet crafted a number of chances throughout but found the impressive Alex Kirk and his defensive colleagues in unyielding form. The intensive fitness of the summer programme continues to show, however, with Dennis Kutrieb having another 180 minutes of friendly action ahead before Tonbridge visit in two weeks.

Next up, Ebbsfleet are at Corinthian on Tuesday night while tickets for Southend United’s visit on Saturday are now booking here.