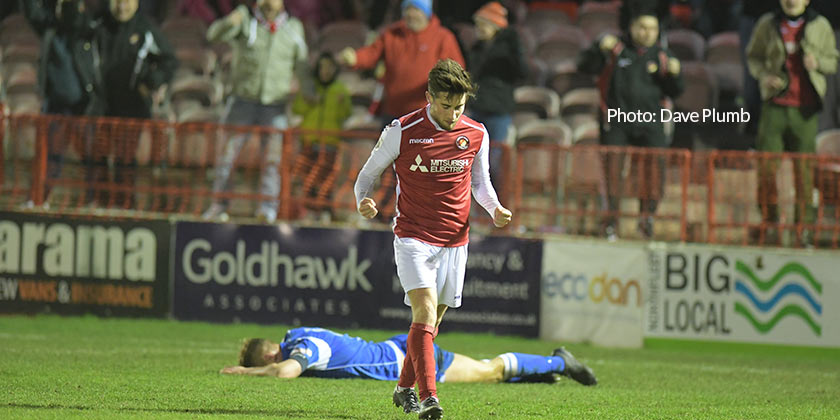 Sean Shields left it late, very late, to celebrate his 100th appearance for the Fleet with an equaliser deep into stoppage time that kept his side’s Buildbase FA Trophy hopes alive. Warrington Town, 36 places below the Fleet in the football pyramid, looked to have clinched the result of the round with a late goal of their own but saw their dreams shattered 10 minutes later.

Not that the EvoStik Premier side won’t fancy their chances in the replay at Cantilever Park on Tuesday after a brave, adventurous performance and Fleet will know they’ll have to perform at a level closer to their potential on a ground where Warrington have lost just three times this year.

There were three changes for the Fleet with Jack Payne, Andy Drury and Kenny Clark out (the latter with a potentially serious knee injury sustained in training) while in their place were Dean Rance, Myles Weston and Chris Bush. Warrington suffered a blow in the warm-up with experienced goalkeeper Tony McMillan injured and young reserve Ben Ascroft, not even named on the original teamsheet, stepped in to take his place.

Fleet might have hoped to test the rookie goalkeeper but he was well protected by his defence and enjoyed a few early touches to settle his nerves. The players in front of him settled well also and the lively Jamie McDonald flicked a ball over Chris Bush early on which just ran ahead of him, Nathan Ashmore the only Fleet player barring his path to goal. Warrington won a couple of free-kicks on the edge of the box but failed to trouble Ashmore, though they enjoyed several spells of possession football in and around the home penalty area.

At the other end, Danny Kedwell couldn’t get any power on his header after Jack Powell floated a free-kick to the far post and then Luke Coulson got on the end of Myles Weston’s admirable cross after a poor goal kick from Ascroft, but he directed his header over the bar.

There was little else to excite Fleet fans, though Bush wasn’t far off getting a head to Weston’s corner on 19 minutes, who then had to be alert to stop the run of McDonald as he charged from a wide position into the box. Kedwell then drove a weighty shot from 25 yards that drew an acrobatic save from Ascroft but the last 15 minutes of the first half were a messy affair with neither side able to get the ball down to find a teammate. Bush was withdrawn five minutes before half-time, clearly limping from an earlier challenge, and that forced Sam Magri into the centre of defence.

Substitute Jack Connors was immediately into the action after he was hacked down following a run through the Warrington defence, with Adam Carden booked for kicking the ball at him  after the whistle. Powell also saw yellow in the same period for bringing down Will Hayhurst and it set the tone for an unnecessarily busy period of cautions in the second half. 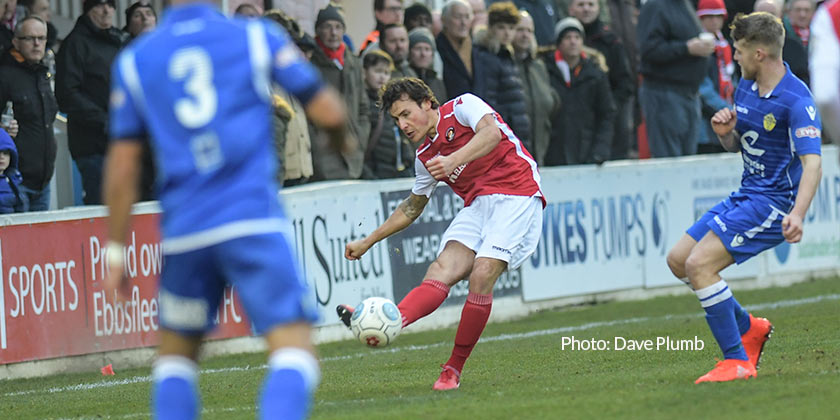 Fleet looked slightly more sprightly in the opening moments of the second half, with Coulson sending a shot wide and then Shields seeing another blocked. But the mini-revival lasted only four minutes before Warrington went close. Winfield gave the ball away and McDonald’s ambitious attempted lob from all of 35 yards was on target but Ashmore showed great agility to rush back to his line and claw the ball over the bar.

On 54 minutes Dylan Vassallo whipped a shot across the Fleet goal from a pass by impressive Tranmere loanee Devarn Green before Daryl McMahon threw on his last two substitutes. Powell, who appeared to be ill returning for the second half, made way for Andy Drury and then Payne replaced Rance after the latter found his way into the referee’s book, a possibly precautionary measure from the manager to keep his side with a full complement of players.

A superb run by Green through the middle on 63 minutes saw him wriggle into space and attempt to sneak a low effort past Ashmore which seemed promising but the Fleet goalkeeper managed to grab it on the way past. Weston and Winfield found themselves in the book within a short space of time as referee Gary Parsons did his level best to make an unappealing game even more disjointed.

But even the referee couldn’t be blamed for Fleet’s lack of cutting edge and when Payne’s 70th minute shot trundled towards Ascroft, it was the first action of the half for the goalkeeper. He was tested a little further four minutes later, diving at his near post to prevent Coulson’s low delivery from the byline reaching Kedwell.

His opposite number had to be alert to a cross from Green on 77 minutes, while Liam Goulding’s follow-up shot was goalbound and had to be cleared off the line by Connors. But five minutes later, Warrington found the breakthrough they might legitimately thought had won them the game. With Fleet slow to clear their lines, left back Rory McKeown slipped a ball inside for substitute Ged Kinsella and he found a gap between Ashmore and the far post, curling a shot into the bottom corner.

There seemed little chance of Fleet mounting a response on the evidence of the previous 80 minutes and Warrington did their best to wind down the clock. Winfield was sent up front in a bid to apply some pressure to Warrington’s back line. And with time ticking away, a ball on to Kedwell was flicked on by the Fleet No.9 to land at Shields’ feet. Quick thinking by the winger saw him rifle a low shot away from Ascroft and into a gap at the far post to set up a long-distance replay on Tuesday night.

Ed Miller has been Ebbsfleet United's communications manager and programme editor since 2014 and responsible for the club website since 2007. Contact him on ed.miller@eufc.co.uk
PrevPreviousCook becomes a loan Card
Next“This is a very special football club” – Peter Varney says thank you…Next