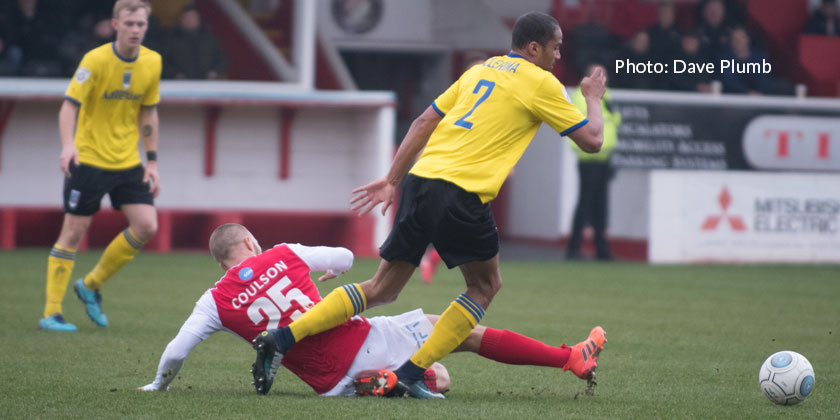 One win apiece last season, two 1-1 draws this time around – there’s little more than a cigarette paper still between the Fleet and Maidenhead United and so it proved again this afternoon. Goals at the start and end of the game from the same men who scored in the 1-1 draw at York Road were the main talking points and although Maidenhead deserved the equaliser, Fleet will be the more disappointed to have seen their lead evaporate just eight minutes from time.

Daryl McMahon made two changes from the side that drew at Leyton Orient, Jack Payne and the injured Sam Magri making way for Jack Powell and Lawrie Wilson. And if there was any suggestion that the rivalry of last season had dissipated, that was thrown out after a frenetic opening quarter of an hour.

Maidenhead roared out of the traps against a Fleet side caught cold on only their second game of the month. The home defence looked hesitant early on and with possession surrendered in midfield, Sam Barratt was first to the ball 25 yards out. He roamed forward and hit a shot that took a wicked deflection, Nathan Ashmore doing ever so well to get down and push it behind for a corner.

A minute later, Fleet were again a little slow to the ball and Sean Marks glanced a ball down in the box which Moses Emmanuel took an acrobatic swing towards and it smacked back off the post.

But with Fleet surviving that scare, they took the lead after just four minutes.  Andy Drury found space to roam forwards in midfield and as he was closed down he laid a short-range pass into the feet of Luke Coulson who took a glance and drove a low ball out of Carl Pentney’s reach and into the corner of the goal for 1-0.

Still there was no let-up and twice more Emmanuel skipped into shooting areas, collecting Marks’ pass and drawing another save from Ashmore. The furious pace on the pitch was provoking plenty of noise off it as the two sets of fans lined up side by side in the Plough End, home fans buoyed by the goal, Magpies supporters encouraged by their side’s performance.

On eight minutes, the visitors got behind the Fleet defence again, rampaging from the left, and Barratt’s excellent cross needed little more than a touch from the stretching Emmanuel but he couldn’t apply the finish.

Gradually Fleet cut off the supply to the former Dover and Bromley man and he moved inside and then further out on to the opposite wing. He did lay off an effort for Marks on 19 minutes but the hat-trick hero of last season was careless with his shot and hit it well off target from a good position.

Rance was guilty of similar moments later at the other end when a deep cross to Danny Kedwell at the far post was nodded down and the midfielder, on his 200th appearance, had found a great position but pulled his shot wide of Pentney’s upright.

On 25 minutes a mix-up in the Maidenhead defence between Remy Clerima and Alan Massey fell kindly for Drury but his attempted lob over the goalkeeper flew too high. Fleet were able to stifle the visitors for the remainder of the 45 minutes as the tempo eased off and they had more control as the half drew to its conclusion. Lawrie Wilson arrowed a fine cross into the box that Clerima had to clear off Corey Whitely’s head but that was it for chances from either side before the whistle. 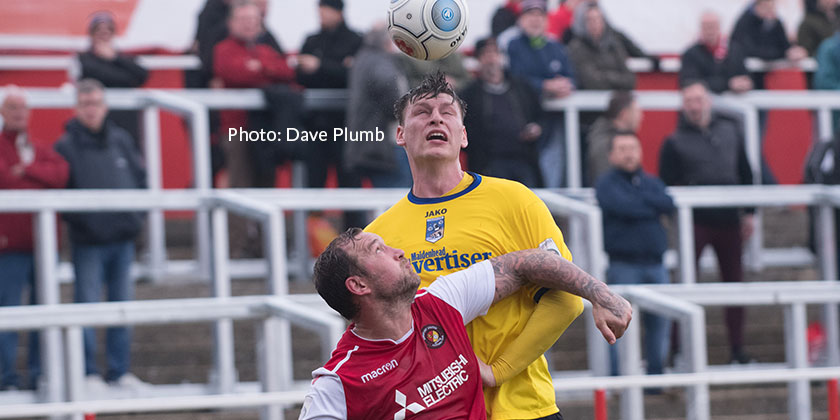 By contrast, the second half began at a fairly pedestrian pace, with Maidenhead the more adventurous side for the first 10 minutes or so. They had a good chance to equaliser on 51 minutes when Harry Pritchard carved a path down the right and his cross provoked a goalmouth scramble with Marks, Barratt and Emmanuel all seeing chances blocked before Fleet cleared their lines.

On 55 minutes, Dave Winfield must have had visions of his goal at York Road last season when he got up to meet a corner firmly but his header bounced just the wrong side of the post. Fleet picked up the pace from the hour mark as Maidenhead’s chances dried up for a period and a solo run and shot by Coulson had to be met with a firm block by Pentney. Fleet’s front runners were well shackled by the Maidenhead defence and as such Whitely made way for Sean Shields on 65 minutes, having been unable to make much headway in the Magpies box.

Ashmore diverted a Clerima effort wide for a corner and did even better when Emmanuel’s viciously dipping shot on 71 minutes looked set to lodge itself beneath the bar but the Fleet goalkeeper showed great agility and accuracy to tip the ball over at full stretch.

Fleet were left holding their heads two minutes later when what appeared to be a wasted free-kick was met by Rance ghosting in on the far side of the box. He cushioned a great header into the six-yard area and with Shields poised to connect, Ryan Upward almost put the ball into his own net before Massey cleared off the line.

But the visitors kept pressing and but for some last-ditch defending, substitute Jake Hyde could twice have had a clear sight of goal before another of his efforts bounced off Rance and trickled wide with Ashmore watching it anxiously.

And on 82 minutes, the National South champions got their goal. A long throw-in was only half cleared and as Ashmore collided with Winfield when both went for a high ball, it dropped for Pritchard who was able to take aim and shoot his side back into the game.

Fleet threw on Norman Wabo for his debut and seemed desperate to regain the lead but in four minutes of time added on, were guilty of some erratic passing that allowed Maidenhead to continue to play the game in the home half. One last attack towards the Plough End gave some faint hope as Pentney dropped the ball coming for a high delivery and some theatrics persuaded the referee to blow for a foul and issue Drury and the Magpies keeper a yellow card each.

Ed Miller has been Ebbsfleet United's communications manager and programme editor since 2014 and responsible for the club website since 2007. Contact him on ed.miller@eufc.co.uk
PrevPreviousTake That Experience return to Kuflink Stadium
NextNo gripes about late goal, concedes honest McMahonNext