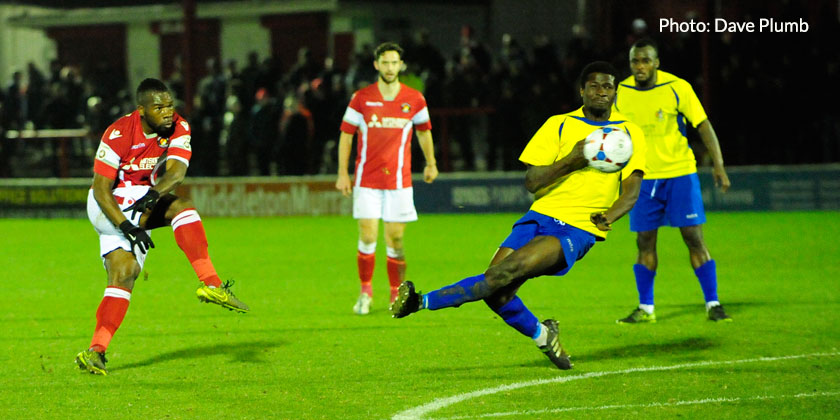 Ebbsfleet United went 12 points clear at the top of the Vanarama National League South courtesy of Aaron McLean’s fifth goal in four games on the stroke of half-time. While Fleet largely dominated, especially in the second half, St Albans’ stubborn resistance kept the outcome far from a formality until the final whistle.

The opening exchanges were fairly pedestrian with neither side manufacturing a decent opportunity, Aaron McLean’s ninth minute stooping header that gained a corner the most Fleet had to show. It took until the 20th minute for the home side to assert their authority and great footwork from Danny Kedwell after a lay-off by Matt Godden presented Stuart Lewis with an opportunity to get a shot away but he was crowded out on the edge of the box.

Fleet then had a spell where they stretched the visitors. Godden was first with a glancing header from a Matt Fish cross that Welch saved on the floor before Kedwell sent a back header looping over the upright. A corner from the left by Anthony Cook then saw Godden creep in front of his marker and arrow a header on target that was swept off the line by the covering defender.

The home side were now into something of a rhythm and Tom Bonner was inches away from a Fish free-kick into the six-yard box. St Albans barely had a sniff, a Thalassitis shot that was high and wide the closest they came. And just as Fleet were looking frustrated as half-time approached, McLean got the vital goal, trying his luck from just outside the box with a shot that skipped off the turf in front of Welch and found the back of the net, though several among the home crowd seemed uncertain whether it had hit the target.

Fleet sought to build on that narrow lead in the second half and they enjoyed even more possession in the second 45 minutes. It took eight minutes for the game to spark into life, though probably not as it should have as the referee produced a flurry of yellow cards. Having issued Dean Rance a yellow in the first half, he produced further cautions in the space of five minutes for Al Bangura, Sam Corcoran and Udoji for the visitors while McLean and Cook also picked up bookings.

With the game threatening to boil over at that stage, the hot heads cooled and Bryan van den Bogaert – who showed some excellent attacking energy all game – almost unlocked the defence, robbing the ball in midfield and picking out McLean whose ball across to Godden ran just behind him. Godden had another couple of chances within minutes, his first effort diverted behind at the near post by Joe Welch, and his second a golden opportunity provided by McLean into the Fleet top scorer’s path, but Godden delayed and Welch managed to save at his feet.

Still Fleet kept coming and on 82 minutes, Lewis – who was a driving force in midfield all game long – showed great technique to half volley a corner delivery just past the post. Another Van den Bogaert run found McLean who again met a barrier in the form of Welch. St Albans were resolute in defence and the longer the scoreline stayed at 1-0, the more anxious the home fans grew even though, in truth, their team were in control.

That said, there was one heart-stopping moment in the three minutes of time added on when a low cross flashed across the Fleet six-yard box with Thalassitis poised but it was momentary danger and Fleet closed out the game confidently to take them to 63 points – and beyond last season’s tally already.

Ed Miller has been Ebbsfleet United's communications manager and programme editor since 2014 and responsible for the club website since 2007. Contact him on ed.miller@eufc.co.uk
PrevPreviousGreenidge goes on loan and KSC semi arranged
NextFleet head off for Truro tempestNext