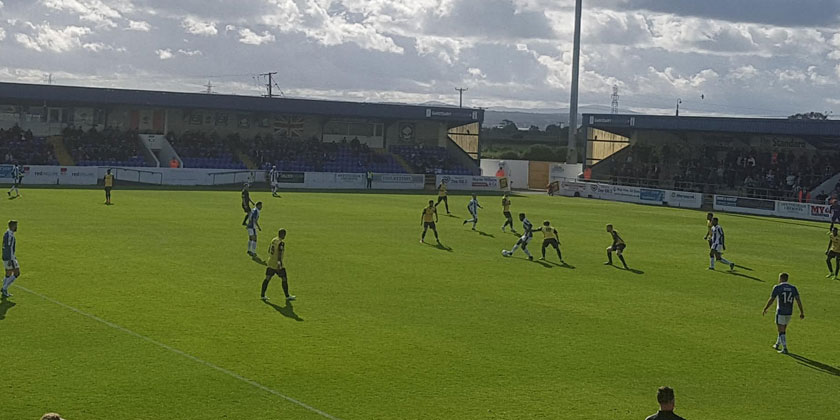 Jack Powell’s fine 30-yard shot looked like it might have been win number two of the season for the Fleet but instead a late Chester fightback produced draw number eight.

It was a strong closing display from Chester who were out to impress after the dismissal of manager Jon McCarthy in midweek and they were a step above from the sorry side that lost at Solihull.

After a wet journey up, the thunderclouds had parted by kick-off and on a decent surface, the home side went about their business, keen to shake off their early season lethargy.

Fleet had their moments as well, however, and Bagasan Graham and Sean Shields showed plenty of willingness to get forward and sling some balls into the box.

Chester were well up on the corner count, however, without creating too much of danger to Nathan Ashmore and his defenders. Fleet’s first flag kick on 14 minutes came to nought and Chester gradually cut off the supply line to the visitors’ flanks.

Ross Hannah was busy going forward for Chester and he tested Ashmore on 19 minutes, running through the middle but the effort was low and at the goalkeeper. Ashmore saved another from James Akintunde and raised the ire of the home support when he sent Paul Turnbull flying with a weighty shoulder challenge.

It was Turnbull who had Chester’s best chance up to that point when his low drive from the edge of the box on 36 minutes thundered just wide of the post but Fleet’s defence were up to whatever came their way and it seemed if they could regroup at half-time, the game might be theirs for the taking.

Fleet’s first shot on target came on 43 minutes when Darren McQueen managed to wriggle into some space and let fly at Conor Mitchell before Hannah did the same at the other end, but Ashmore was equal to that.

The visitors were better after the break and Chester’s forward movement was momentarily checked. Powell’s long-range shot was gathered by Mitchell before the goalkeeper had to stretch to knock away Shields’ searching cross from under the bar.

On 54 minutes, Fleet had Chris Bush to thank when a quickly-played ball into the box wrong-footed Ashmore and with the goal open, Bush raced across to sweep up.

And three minutes later, the goal the game needed came from nothing. With McMahon about to make a triple substitution, he can’t have seen Powell venture into the middle with the ball and launch a peach of a shot off his left foot that bent high beyond Mitchell into the top corner.

Fleet went to more of a rigid back four when Kenny Clark then replaced Yado Mambo and Coulson and Andy Drury soon followed for Shields and Powell as Chester looked for a way back in. Ashmore saved a header from the tricky Nyal Bell before the home side really stepped up their levels in the last 15 minutes.

Ashmore pulled off three fine stops in as many minutes when he got to another Bell header and then Lucas Dawson saw a shot tipped around the post. Akintunde then blasted a low effort that Ashmore got in the way of as substitute Craig Mahon began to pull all the strings in midfield. But the goal that was threatened arrived on 80 minutes. With Fleet light down the left, Mahon and Bell attacked the space  from a ball upfield and slipped a ball to Akintunde who finally beat Ashmore with a well-placed shot far out of the goalkeeper’s reach.

Both sides’ intensity levels were high in the last few minutes with Chester’s success-starved supporters roaring on their side as they sensed a win. McQueen had two chances with one shot blocked in the box as he twisted on the edge and then an even better opportunity in the closing moments when he had space to the left of the goal but instead of putting his foot through the ball tried to play the incoming Coulson in but the soft pass got stuck and was cleared.

Chester had two final opportunities with Bell firing just inches wide of the post and Dawson sending an effort on to the roof of the net in more than four minutes of time added on but in the end Fleet were probably glad to hear the final whistle.

Ed Miller has been Ebbsfleet United's communications manager and programme editor since 2014 and responsible for the club website since 2007. Contact him on ed.miller@eufc.co.uk
PrevPreviousFleet seek to repeat a history that never was
Next“We can achieve more than we are…” says McMahonNext