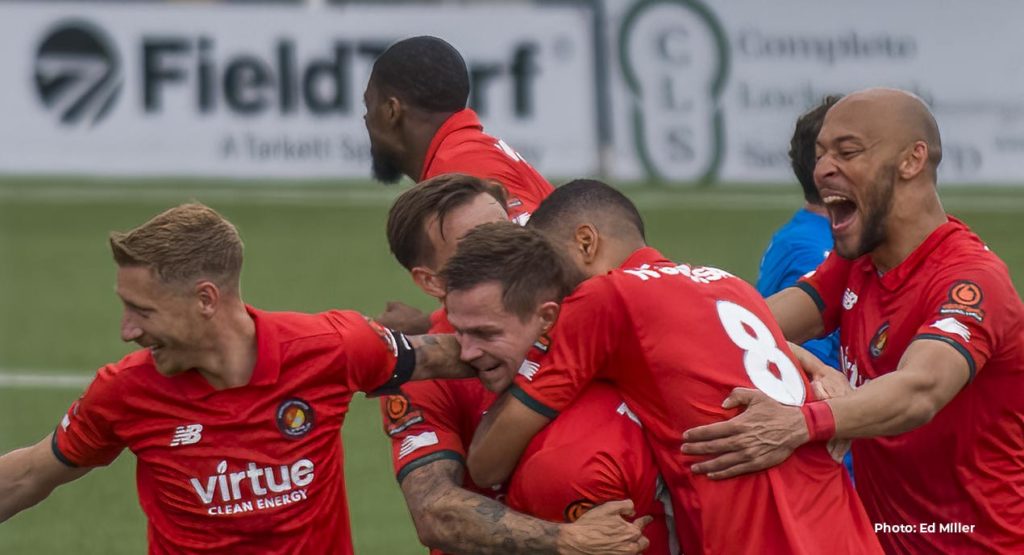 It wasn’t quite last-day madness in this penultimate game of the season but the second-halves around the Vanarama National League South certainly provided thrills and spills aplenty.

And none more so than at New Lodge as Craig Tanner blasted Fleet back into third place (and on top of the form table for good measure) with a last-minute beauty that relegated Billericay in the process.

At one point in the final few minutes, Dartford went a goal down, Maidstone appeared to have equalised against Welling – leading to huge cheers from the Billericay end – before it turned out that Welling had straight away added a third. And then Tanner’s late, late strike changed the complexion in the top three and confirmed the relegation place at the same time.

The big news amongst the five changes for the Fleet was the return of Alfie Egan after more than two months in the treatment room. Alongside him came Will Wood, Lee Martin, Craig Tanner and Dominic Poleon, with Rakish Bingham, Elliott Romain and Jack Paxman dropping to the bench, while Chris Solly and Sido Jombati were not in the squad.

There was a decent pace to the opening period without much penetration from either side but the noise level at the home end rose on 11 minutes when Anderson Pinto carved a path along the byline and went down in a heap but his penalty appeal was optimistic. There was another roar when Michael Chambers was flattened with the next forward incursion by the Blues but again referee Dale Wooton thought better of it.

The home side were playing a pressure game and getting the ball forward quickly, with former Hampton striker Niko Muir working off the shoulder of Alex Finney to steal a yard. Fleet’s first sniff of a chance came on the 15-minute mark, Lee Martin’s cross to the far post met by a combination of Will Wood and Toby Stevenson before the referee awarded a dubious goal kick.

The returning Egan had an effort deflected into the goalkeeper’s arms on 20 minutes after a nifty turn from Poleon to make the space. It was pacy, physical stuff and end-to-end at times with Pinto driving low into Louie Moulden’s arms.

The Billericay end was temporarily quietened with news of Welling taking the lead against Maidstone in the relegation fight but on 27 minutes the home fans were celebrating when Toby Stevenson’s headed interception fell to Femi Akinwande who had plenty to do off-balance and under pressure from Ben Chapman but he did ever so well to arc the ball over Louie Moulden.

Fleet responded when Lee Martin found Coulthirst who held off his man to turn and force a low parry from Rhys Lovett. And five minutes before half-time, a Tanner through ball saw Poleon into a gap, but his pull-back missed Coulthirst and Lee Martin was left with too much to do to get a shot away. Moments later Poleon and Tanner exchanged passes inside the box but Billericay survived as the final pass skipped away from Coulthirst again.

There was one final good opportunity before the whistle when Coulthirst delayed the ball for support to arrive and he found Egan lurking on the penalty spot, his shot forced behind for a final corner as the home side went in at the break ahead.

Paxman’s introduction against his old club for the injured Joe Martin seven minutes after the break almost paid off when he worked a path through to Egan whose effort at the near post was turned behind by Lovett.

Billericay were back on it courtesy of a counterattack and when Finney headed that clear, Pinto skidded an instinctive shot across goal but away past Moulden.

Then Fleet roared straight back on the attack on 57 minutes when Egan hared upfield, Coulthirst got the ball behind the defence to the byline and played a pass back across goal where both Lee Martin and Egan were following up, the skipper first to it to bury it past Lovett.

From the restart, Akinwande almost got to a shot that Moulden could only push into his path but the Fleet keeper recovered to scoop away, taking the Billericay striker with him but the vociferous appeals for a penalty were perhaps more in hope than conviction.

Former Fleet defender Ekpiteta made the next shout to get something from the referee when a scramble in the box saw him go to ground under Finney’s challenge on 62 minutes but that seemed even less worthy than the previous appeal.

It was certainly an evermore pulsating battle, both sides throwing themselves into challenges as the pace and the need for goals heightened and the referee increasingly had his work cut out.

With Welling winning, the home side might have got their all-important goal when substitutes Jack Munns and Dylan Gavin combined, the latter skying his effort after nosing ahead of Finney into a shooting position in the box.

There was plenty of huff and puff but no surefire chances from both sides, though Fleet were stretching a tired Billericay by the end and sub Bingham’s low shot past the post four minutes from the end might have been as close as it came for the visitors. Lee Martin then almost opened things up for Romain but Lovett got to the ball ahead of him, and at the other end Chapman produced a superb tackle to halt Akinwande.

But, with Dartford trailing Braintree in the other game, Fleet summoned a moment of magic with a minute left. Bingham supplied Tanner just outside the box and with his typical half-nonchalance/half-brilliance, the former Motherwell man let fly and curled an exquisite shot past Lovett, the goalkeeper who had proved such a formidable bulwark in the Christmas fixture.

The added time passed without real incident and now all eyes turn to Fleet’s home match against Chelmsford where a win will secure third place and a home play-off semi-final.

Ed Miller has been Ebbsfleet United's communications manager and programme editor since 2014 and responsible for the club website since 2007. Contact him on ed.miller@eufc.co.uk
PrevPreviousSolly surpasses scoring rate
NextFleet boss’s best wishes to Billericay…Next