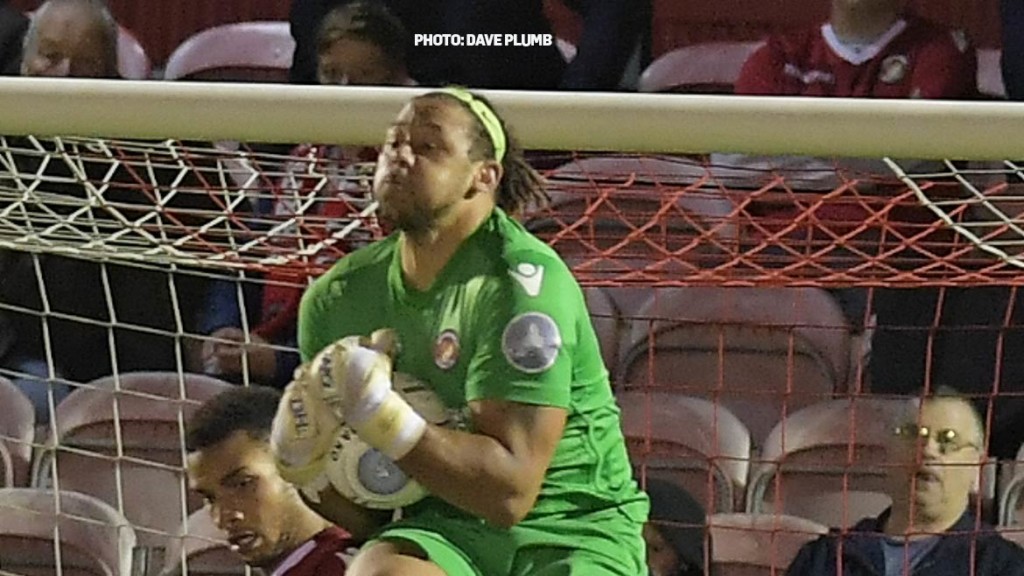 Ashmore the difference between one point and nothing

Fleet goalkeeper Nathan Ashmore came in for praise from his manager after a late save meant Fleet were the first side in 17 games to stop Hartlepool United scoring.

“Nathan Ashmore’s made a very important save again,” Garry Hill told BBC Radio Kent’s Charles Webster. “Nathan Ashmore at the moment is playing very, very well. In the few games we’ve had recently he hasn’t had too much to do but what he has had to do – the Solihull Moors game, the Leyton Orient game, Harrogate and the important save he’s made here tonight – performances like that, it’s no secret a lot of people would be admiring the way Nathan Ashmore’s been playing over the last four or five games after a lot’s gone on. It’s been a big test of his character and temperament. He’s been absolutely superb in respect of being called upon in important times and stages of a match. He’s been the difference between one point and nothing or three points and one.”

Getting just the one point tonight was certainly a source of frustration for Hill but he’s taking the bigger picture into account after four points from six over the past two games.

“Is it two points lost, is it a point gained?” he said. “I think when you keep clean sheet at one end, you’ve got to say it’s another point gained. We’re disappointed we haven’t played to the quality and standard we like to play. But you have to look at the picture from Saturday and Tuesday: going to Harrogate and Hartlepool at home and taking four out of six, if it had been the other way around, we’d have said that’s a good return. As I said to the lads, we’re on another little run and that’s important. We go to Barrow, another tough game. All we can do is approach every game positively. We’re working with small numbers and hoping we don’t get injuries. We’ve lost Cody McDonald tonight, to what extent we don’t know yet. He’s going to have a scan hopefully tomorrow. But that summed the game up, it had 0-0 all over it.

“I think [it was] a fair result. I don’t think there was too much goalmouth action tonight. Both teams played the same formation, cancelled each other out. They’re probably more happy than us with the draw but I don’t think we’ve done enough. In the first half Michael Cheek was unlucky when he missed the target when he got round the back of them but we lacked quality tonight in the final third. You’ve got to have quality to work the goalkeeper and we haven’t done enough in respect of working their goalkeeper or their back line of defenders.

Fleet will sweat on McDonald’s injury with a trip to Barrow coming on Saturday and Hill has seen attempts to bolster his lightweight squad founder last week.

“You just get on with it,” he said. “It’s hard to fetch the players in with the structure where we are. We’ve had one or two players which were very close over the last week to coming in. All of a sudden one had a reaction in training, he got a calf strain so that Khyber’ed that one. That’s how it goes. It happens, we all know that no buses come along or they all come along and then all of a sudden there aren’t any to come along! So that’s where it is. The Cody one’s at an early stage yet, it doesn’t look promising. He’s tried to carry on, he was very determined. We made the one change up there tonight. I thought the two boys up there on Saturday worked so hard, I didn’t think they’d have the same kind of impact tonight so I went for Cody. Of course Corey came on and it ain’t happened for him tonight, that happens sometimes.

“We know it will be tough at Barrow, they’re a good footballing side, but I think our away form has been quite encouraging. So we look forward to the long journey, that’s for sure.”

Ed Miller has been Ebbsfleet United's communications manager and programme editor since 2014 and responsible for the club website since 2007. Contact him on ed.miller@eufc.co.uk
PrevPreviousFleet 0-0 Hartlepool United
NextPREVIEW: BarrowNext