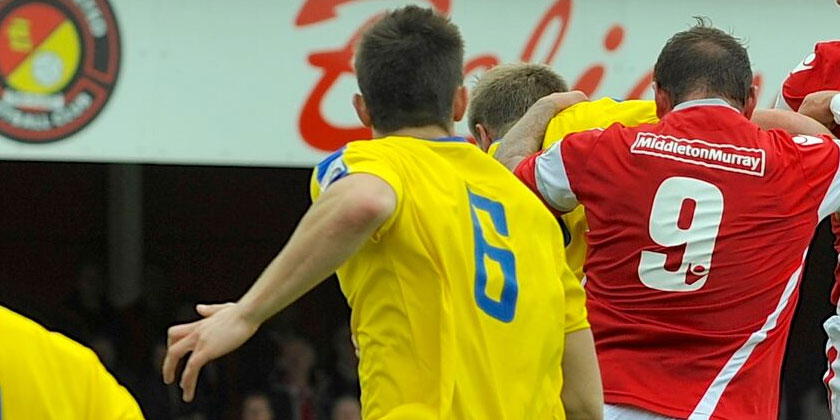 Will the Magpies leave joy or sorrow in their wake?

It may only be November but “top-of-the-table clash”, “six-pointer”, “clash of the titans” and “must win” are phrases being bandied about via the media and excited supporters as the seemingly impregnable Maidenhead juggernaut rolls into town.

The mind games have begun already, with “big-spending Ebbsfleet” already being set up as title favourites by Maidenhead boss Alan Devonshire despite his team’s eight-point lead and superb form five months into the season. It is unlikely Devonshire’s team will concede that lead as easily as their manager’s concession of the betting odds, however. Having not lost a single league game since the first week of the season and with the only defensive record better than our own, the Magpies represent the biggest challenge at Stonebridge Road so far this campaign.

Daryl McMahon, like his opposite number, is naturally refusing to get caught up in promotion talk a month before Christmas but he allowed himself a wry smile at the suggestion it was “just another three points.”

“Of course it is just another game,” he told FleetOnline. “But obviously it isn’t at the same time – there’s a lot of interest riding on the game and rightly so. It’s two good teams who have been playing attacking football going head-to-head. A win, a draw or a defeat won’t decide the season but we need to concentrate on the job in hand which is continuing to pick up points. It’ll be a good game for the fans, it will no doubt have an edge and the players are looking forward to it.”

Maidenhead’s chief danger, as if it even needs saying, is of course Dave Tarpey. The former Hampton hit man has struck 21 goals already this season, adding to the 20+ he has managed in each of the last few seasons. He scored at Stonebridge Road last season in the Fleet’s 3-1 win (pictured above) and also registered on target for Hampton when we last met them in 2011. He has developed a solid understanding with strike partner Sean Marks who is benefitting from something of a second wind after playing most of last season from the bench for Braintree.

Marks comes up against former Iron teammate Mark Phillips with the Fleet central defender attempting to stop Marks influencing the game, having been alongside him last season as the pair helped Braintree to the National League play-offs.

McMahon was more than aware of the Maidenhead threat but was wary of talking it up. “They’re a very good side, Dev’s got them organised and playing to a winning system, that’s plain to see,” he said. “Tarpey’s doing his thing, they’ve got Marks and Pritchard pitching in. We’ve watched them five times this season, we know what they do and how they set up and I don’t expect them to change the way they play for us so it’ll be an open encounter. But while we’ve done our homework, it’s not our job to worry about other teams or fear them. Because we’re a very good side too, we’re at home and they have to worry about us as well.”

McMahon confirmed that Aaron McLean’s injury would rule him out for the remainder of the season and that with the prognosis as it stands, Stuart Lewis is targeting a December return. Goalkeeping coach Michael Jordan was added to the injury list on Tuesday night at Ramsgate and Jon Miles has been recalled from his loan at Concord Rangers early as a result.

“If you look at who’s out on loan, who’s injured, who’s suspended or nearing suspension and who’s available for first-team duty, we were down to about 15 players so I simply couldn’t risk any more casualties for Ramsgate,” McMahon said. He has brought Louis John in on loan from Sutton United to cover Dave Winfield’s absence, with the former York defender’s suspension beginning this weekend for four games.

And the Fleet boss hasn’t ruled out strengthening his side over the winter. “We are looking,” McMahon admitted. “Nothing’s happening in the short-term, we don’t need to panic and just sign people for the sake of it, but there are the right players out there with the right attitude who would make good signings for this club so we’ll see on that front.”

Fleet top the form table in the National League South at present, with Maidenhead’s two recent draws the nearest to “a dip in form” they have experienced so far. The Magpies got back to winning ways last weekend with a 2-1 win over Bath City who saw a penalty saved (as they did at Stonebridge Road) and were reduced to 10 men late on. A wonder strike from Harry Pritchard and another goal for Tarpey gave Maidenhead the win, though Devonshire was critical of four or five players who he believed were “under par”.

Striker Jordan Cox, one of seven former Braintree players (many of whom played against the Fleet in the FA Trophy during 2014/15) is suspended for the Magpies, but that is unlikely to upset the in-form Marks-Tarpey-Pritchard partnership.

Maidenhead’s away record is almost identical to Fleet’s home record (won six, drawn two, conceded seven goals) so there’s little to choose between the sides. And while the game is being talked up as a “decider” of some kind, that would be to forget the likes of St Albans, Chelmsford and Hampton & Richmond who would be only too happy to see the draw that the statistics would seem to suggest.

Fleet’s first ever game at National South level came against Maidenhead back in August 2010. Oddly, the only survivor of that day will be the referee, Elliott Kaye! Kaye, who officiated in the Margate match at Stonebridge Road earlier this season, sent two visiting players off late on as the Magpies won that 2-1.

Ed Miller has been Ebbsfleet United's communications manager and programme editor since 2014 and responsible for the club website since 2007. Contact him on ed.miller@eufc.co.uk
PrevPreviousFleet bow out of county cup
NextJP joins the Bucks on loanNext