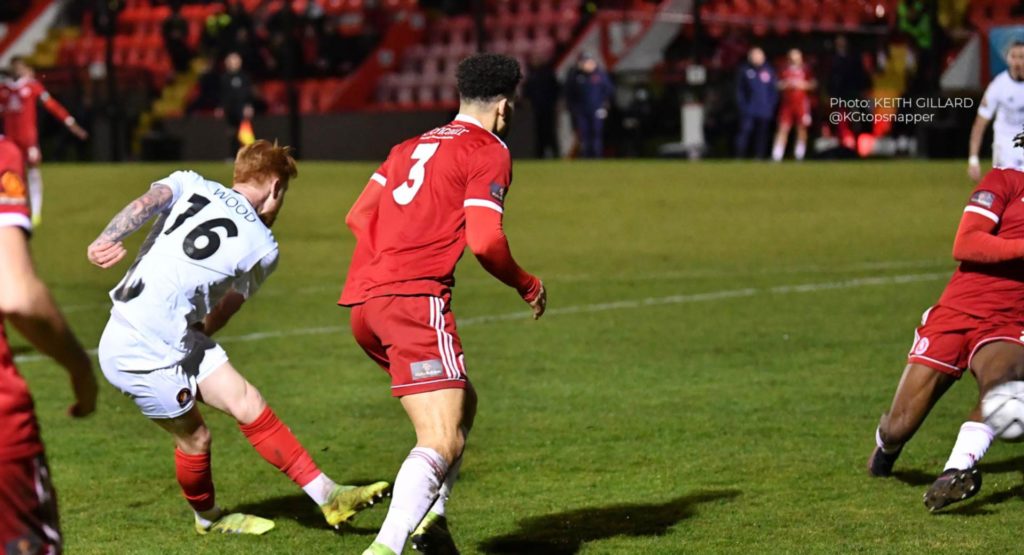 A ding-dong battle at Park View Road saw Fleet roar back from 3-1 down but ultimately concede a hammer blow four minutes from the end as Welling edged this seven-goal drama.

Substitute Will Wood’s late equaliser appeared to have rescued a point for the visitors but Welling had other ideas as the game headed to a conclusion.

The Fleet made three changes as Gio Bellagambi, Adam Mekki and Josh Payne came in for Jordan Holmes, Wood and the injured Sefa Kahraman.

Fleet began well on Steve Lovell’s first Welling home game in charge and both Jack Paxman and Alfie Egan got shots on target as the visitors looked slick from the whistle.

But Welling bit back and they forced a couple of half-chances before taking the lead eight minutes in. After Tobi Adebayo-Rowling had saved the Fleet in one counterattack, Welling followed up with a smart shot from Dipo Akinyemi. Bellagambi appeared to get enough on it to push it against the post but Olumide Durajaiye followed up to smash it home.

Akinyemi produced another effort 15 minutes in that rifled low past Bellagambi’s right post as Welling grew in confidence.

Fleet forced a couple of corners as they tried to get back on terms and Payne headed just wide from one of those on 23 minutes.

Three minutes later Fleet did get their reward when Bobby-Joe Taylor fired a great strike low through a crowd to beat Reice Cook from outside the box.

It was even enough for a period with Welling losing Scott Doe to injury but they regained the lead on 36 minutes. Anthony Cook drew a decent save from Bellagambi but an ensuing goalmouth scramble somehow saw a succession of Welling attempts fail to go over the line until a ball wide in the six-yard box was crashed into the roof of the net by Akinyemi.

Kristian Campbell took advantage of a poor clearance four minutes from the break to weave into a shooting position for Welling but after doing the hard work he hit his effort too high.

Goodman’s high punt forwards moments later was well controlled by Rakish Bingham in the box but he was crowded out by a resolute Wings back line. Mekki was up next, cutting in from the left and delivering a low drive that skipped through the area but skewed off target.

A patient build-up and slick movement looked like it had unlocked the Welling defence just before half-time, Jack Paxman ending the fluid pattern of play with a shot that somehow edged wide.

That wasn’t the last drama of the half, however, as Akinyemi raced through on goal but was brought down by Bellagambi. Welling pleaded for a red card but referee Jack Packman issued a yellow instead and the home side hit the wall with the resulting free-kick.

Bellagambi still had more to do before his side could get inside for a team talk, pushing away a weighty shot from distance.

Dominic Poleon was introduced at half-time for Payne, with Martin reverting to a slightly deeper role. But it got worse for the Fleet before he could make an impact.

On 48 minutes, Goodman was unfortunate to clip Cook on the edge of the box as he ran from behind the Fleet defender and after a brief consultation with his assistant, the referee reaffirmed his penalty decision.

Welling’s main man Akinyemi stepped up to send Bellagambi the wrong way for a 3-1 lead.

Bingham got a shot away that Reice Cook saved as Fleet’s methodical approach around the box struggled to pick apart Welling’s packed box. But as the hour mark ticked around, the arrears were reduced as another quick attack into the box saw Martin’s pass find Poleon who finished from close range for his second goal in as many games.

Goodman found the net when he powered in on a free-kick from the left on 65 minutes but the assistant’s flag denied the Fleet an equaliser with what must have been a knife-edge decision by the official.

There were more groans from the Fleet camp just a few minutes later when Martin’s run took him past a defender at the near post and his pass to Poleon saw the goalscorer hook a shot to the far post that cannoned off it.

Martin and Bingham got efforts on target after that but Cook gathered those as Fleet pressed in waves led by the busy Paxman but the final ball was too often picked off by a red shirt.

Bingham went closest on 77 minutes when he ran in on a through ball to hit a first-time effort that Cook reacted quickly to tip over the bar.

But two minutes later the equaliser finally came. Again Fleet worked it into the box but this time the red wall parted long enough for Wood to spot the gap, exploit it and fire into the corner.

As was typical of such a game, after half an hour of sitting back on the ropes, the goal woke Welling up and Bellagambi had to make an impressive low save from a drive that bounced up off the surface.

And they continued to work on the front foot to strike home a fourth on 86 minutes when an uneasy period of defensive play from the Fleet culminated in Campbell spotting an opportunity to fire home another impressive effort for 4-3.

Martin’s shot in time added on threatened an eighth goal on the evening but it was saved and Welling prevailed.

Ed Miller has been Ebbsfleet United's communications manager and programme editor since 2014 and responsible for the club website since 2007. Contact him on ed.miller@eufc.co.uk
PrevPreviousMonday is Q&A-II Day
NextFleet boss reacts to Welling reverseNext