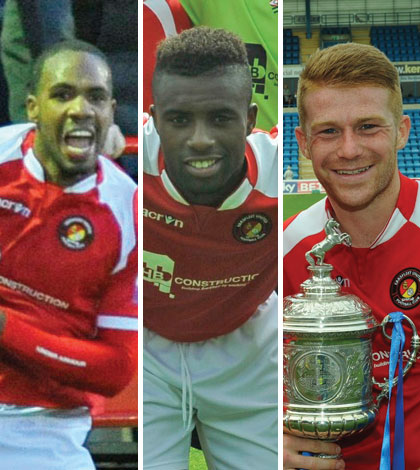 Fleet boss Steve Brown has concluded agreements with three more of last season’s squad as he continues preparations for 2014-15.

Defenders Aiden Palmer and Chris Sessegnon have signed on for the new season, while Alex Osborn returns to the club after his release from Dagenham & Redbridge.

Palmer, 27, joined from Chelmsford City last summer and was an ever-present figure in the Fleet line-up in 2013-14, picking up plenty of player-of-the-year votes alongside the likes of Anthony Cook and Dean Rance. He also weighed in with three goals, including a late, crucial winner at home to Bishop’s Stortford.

The former Leyton Orient left back told FleetOnline he was “over the moon to be signing again. I love the club and I’m happy. The fans have been fantastic towards me, the staff believe in my ability and the club is heading in the right direction. Most of all, we have unfinished business and I believe we can win the league.”

Twenty-year-old Sessegnon moved to Stonebridge Road from Dover Athletic and featured 36 times across the season, including an appearance in the Kent Senior Cup Final.

On signing his new deal, Sessegnon told FleetOnline: “As a young player, it’s great to be at a club on the up, one I really believe is going places with the hard-working staff. And as I’m learning my trade it’s great to have the gaffer, Gritty and David Jupp around as they seem to have the answer to all my footballing questions. I feel I’ve learned so much last year and think my game could be taken to the next level by staying another year.”

Meanwhile, Osborn (also 20) is another whose footballing development is set to reach the next level after a highly promising first full season at Conference South level. He scored five league goals in 40 appearances after an initial three-month loan from Dagenham & Redbridge was extended twice to keep him at Stonebridge Road throughout 2013-14. Following his release by the League Two club, Fleet manager Brown had made no secret of his desire to land Osborn and fought off competition to land the player.

“The ambition and direction the club is going in is exactly what I was looking for,” Osborn told FleetOnline. “I had a few other offers but having been on loan here last year and knowing the players and staff, it’s perfect. Working with Browny and Gritty again is something I’m looking forward to this season as I’ll have more time to improve my game and attributes and I know they will help me along the way.”

Delighted to have tied up these deals over the Bank Holiday weekend, the Fleet boss is now keen to conclude business with more of his targets through June.

Ed Miller has been Ebbsfleet United's communications manager and programme editor since 2014 and responsible for the club website since 2007. Contact him on ed.miller@eufc.co.uk
PrevPreviousFour fix their Fleet futures
NextFleet secure scoreboard sponsorshipNext