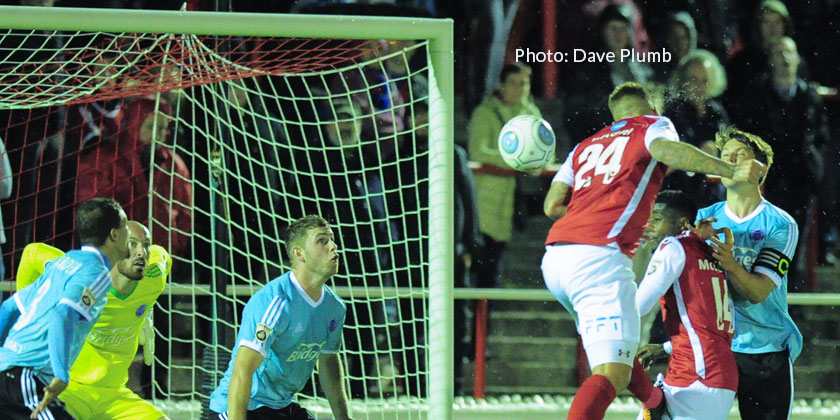 Fleet frustrated with the finer details of finishing

Daryl McMahon was convinced his side could and should have taken at least one of their chances on Tuesday night to change the complexion of a game that saw Fleet lose at home for the first time since November 2016. He pointed to Dean Rance’s opportunity from the edge of the box with the scores still at 0-0, plus the period of set pieces on the half-hour mark when Fleet were in the ascendancy, as well as Darren McQueen’s second-half effort that was hooked off the line.

“I thought we had numerous chances tonight that we didn’t have Saturday that we didn’t take at crucial times,” McMahon told BBC Radio Kent’s Charles Webster. “We had a 15-minute period we had them locked in in the first half, lots of set pieces, lots of opportunities. Before they scored we had a great chance as well that we didn’t take on the edge of the box. And the start of the second half we had a couple with Daz getting down the side. In the end, if you don’t score when you’re on top, you normally don’t win. But it wasn’t what we were looking for.”

The Fleet boss was well aware, however, that when those chances go begging, his side will struggle to overcome an opposition, especially one that gets their noses in front.

“It’s these finer details when you’re losing football matches,” he said. “At the minute I don’t think you can say we’re clinical enough in both boxes or we’re not getting the rub of the green a little bit as well which makes a massive difference. But the lads are working hard to make sure we improve performances and results.

“Especially in that first half, we had that period where I don’t know how many balls went under the crossbar but just wouldn’t go in for us. But you have to score and it changes the match. If you don’t, it’s a massive confidence boost for them to ride that out and for us it’s a blow that you don’t capitalise when you’re on top. The second goal was a poor one, a poor free-kick to give away and a good finish from Scott Rendell and he’s got that kind of finish in his locker.”

The games get no easier for the Fleet with the arrival of Tranmere Rovers on Saturday and McMahon says it’s all part of his side’s learning curve to live with the higher intensity teams in the division.

“It was a big week this week in the sense of playing the clubs we’ve played, ex-league clubs and we’re back in this level now,” he said. “Chester on Saturday, a  [former] league club tonight, Aldershot were in the play-offs last season, Tranmere the league favourites before a ball was kicked and we know they’re tough games. But I think we’re in a situation now where we really need to dig in, work hard and stick together. I’ve got no doubt come Saturday the fans, who were brilliant tonight, will be brilliant again for us.”

And as for the unbeaten run finally being ended, the manager was philosophical. “It’s a monkey off our back and we have an opportunity now starting Saturday to start another run. That’s important, especially at home, to go on that front foot again and take the game to Tranmere. It’s almost like a free hit because everyone will say Tranmere should beat us really in our current form so we need to work hard Thursday and Friday and be ready come Saturday.”

Ed Miller has been Ebbsfleet United's communications manager and programme editor since 2014 and responsible for the club website since 2007. Contact him on ed.miller@eufc.co.uk
PrevPreviousFleet 0-2 Aldershot Town
NextManager’s Notes 12.09.2017Next