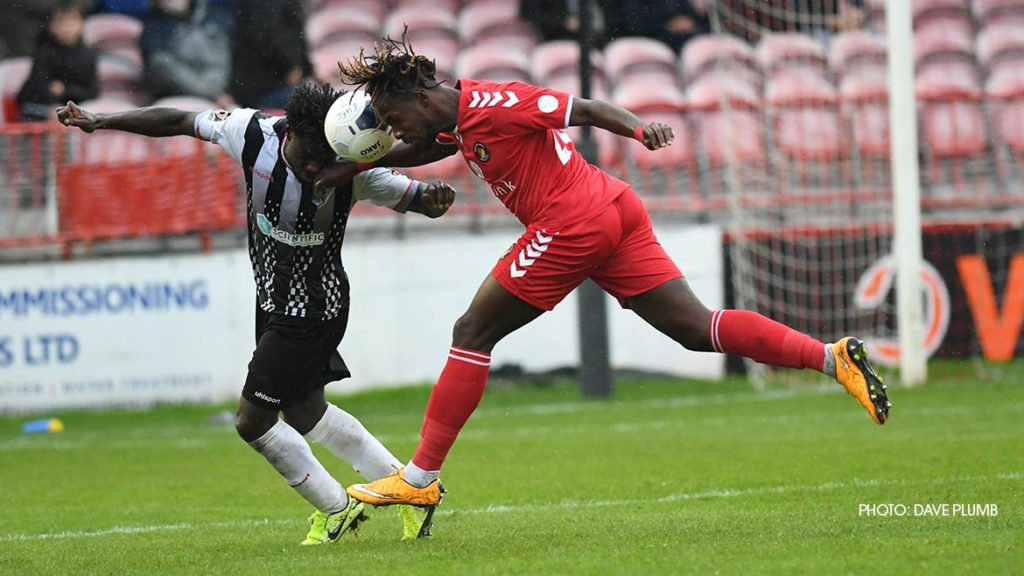 If there’d been a topical song at the Kuflink Stadium in October then it would have been David Bowie’s Changes such were the modifications around the club during the month.

And it all started within the first four days of October. The first alert that change was in the air came with the season-long loan of Nathan Ashmore to Boreham Wood, the two-times player of the year having not appeared since Jordan Holmes’ arrival at the end of August.

On the same day, Kevin Watson joined the coaching staff from Hungerford Town to replace Ian Hendon. Some 24 hours later, Tomi Adeloye rejoined out of the blue having spent part of pre-season at the Fleet and we also landed Josh Payne on loan from Crawley Town; that clearly pre-empted a surprise outgoing move when Solihull Moors pounced to lure James Ball back nearer his native north.

Ball had never quite settled in this Fleet side despite high hopes and a pedigree at Stockport that clearly illustrated his capabilities. And indeed Solihull proved to be a much better fit for the midfielder with him scoring four goals in one FA Cup match a little over a month later.

The changes did little to aid the Fleet’s cause and in front of the BT Sport cameras, former player Brendan Kiernan came back to haunt us with both goals in a 2-0 defeat at Harrogate.

Manager Garry Hill suggested the fine line between an inability to score first and the constant missing of chances to equalise before conceding to go further behind was costing the Fleet and that more or less sealed his fate when Torquay came to town and cruised to a 4-2 win at the Kuflink Stadium. Once again, Fleet battled well in stages but were guilty of mistakes or wastefulness at crucial times.

“There’s too much charity in our defending” said Hill and that pretty much amounted to his departure two days later, Watson thrust suddenly into the caretaker’s job inside a week of joining the club.

Player movements continued to flow. Botti Biabi was released after a couple of bright but ultimately sporadic appearances from the bench. In came Andre Blackmanm (Southend United), Marvel Ekpiteta (Newport County) and crucially – and to the amazement of Charlton fans – midfielder Albie Morgan on loan.

Watson was unfortunate not to land at least a point at home to Maidenhead in his first game but had first-hand insight into his side’s tendency to squander superiority and a goal lead as the Magpies came from behind to win 2-1.

Morgan’s performance was one bright spot but he had to sit out two games as Fleet locked horns with Woking in the FA Cup. Once again a lead was squandered in the first game to a late penalty equaliser but Alex Reid maintained his fondness for a goal against Woking with the winner in the replay.

That set Watson up for a dream caretaker spell as Morgan returned to fire home a free-kick off the goalkeeper at Sutton in a game full of drama. A memorable Josh Payne volleyed goal, followed by an injury to Holmes, brave deputising between the posts by Tyler Cordner in a heart-stopping quarter of an hour and finally an incredible penalty winner in the 99th minute from Gozie Ugwu gave Fleet fans two of their rarest feelings – a win and a win at Sutton no less!

This was followed up in the last act of a momentous October by a third win on the spin, Morgan getting one of four goals as Fleet ran riot at Chorley even if the 4-0 scoreline didn’t quite reflect the closeness of the game otherwise. Harry Palmer made his debut for the injured Holmes and celebrated it with a clean sheet as Watson’s return of results did his case for a permanent job no harm at all.

HIGHLIGHT OF THE MONTH: The drama of the win at Sutton United – it had plenty: five goals, quality goals, late goals, injured goalkeepers, no reserve on the bench, a defender in goal with good saves and dodgy saves in equal measure… and that’s even before you get a penalty to win it nine minutes into stoppage time!

LOW POINT OF THE MONTH: The defeat at home to Torquay showed the huge job Garry Hill was facing in getting the club out of danger and it was one that he was unable to influence as a managerial change was made.

THE STATE OF PLAY: Still in trouble and still one place off the bottom, but Fleet had put three points between themselves and Chorley and closed the gap to safety to the same margin, sucking Sutton into the bottom four as well. Wrexham were the other side in the relegation places.

Ed Miller has been Ebbsfleet United's communications manager and programme editor since 2014 and responsible for the club website since 2007. Contact him on ed.miller@eufc.co.uk
PrevPreviousSeason Review Part 3: September
NextSeason Review Part 5: NovemberNext