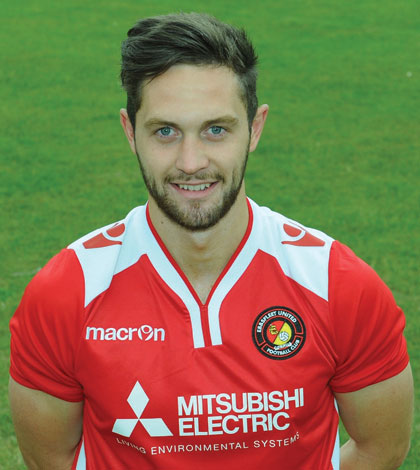 Rance: ‘There’s more in the tank’ ahead of Sutton showdown

Fleet’s returned midfielder Dean Rance is limbering up for his second home league appearance of the season, promising the fans he has more to give in coming weeks.

The players’ player of the year, who turns 23 next week, missed Fleet’s entire pre-season build-up and admits he’s still not at the level of fitness he would be otherwise. In an interview featured in tomorrow’s programme, Rance says, “I’m not 100% fit yet, it’ll take a few more games. I’ve been out for quite a few months so the sharpness isn’t there. But there’s more in the tank.”

Having played another 90 minutes in midweek in the Kent Senior Cup defeat at the hands of Charlton, Rance – like his manager – much prefers the match environment to increase his fitness levels than the relative monotony of a training regime. Having had an injection in a knee injury that first cropped up back in March, and having had intensive physical rehabilitation since, Rance has now set his sights on climbing the table.

“We all know the expectation the club has and that’s what comes with playing for a team like Ebbsfleet,” he said. “We’re as desperate as the fans to be successful and titles are definitely not won in the first half of the season.”

That said, the clash against Sutton is probably Fleet’s biggest test to date, with last season’s runners-up – after a similarly mixed start – now beginning to fire on all cylinders. Steve Brown has no fresh injuries to report and should have a bigger pool from which to choose now that Daryl McMahon, Chris Sessegnon and Michael Corcoran are back. Shane Huke, Alex Osborn and Lloyd Harrington still have question marks over their involvement going into the next two home games.

Sutton sit two places ahead of the Fleet in the table – as they did in our last meeting in April – and have started to hit some form, losing only one of their last six games. A number of signings have bolstered a squad that had undergone changes in the summer, and in recent weeks they have brought in Glen Southam from Chelmsford, strikers Jo Kuffour and Nick Bignall plus defender Kevin Amankwaah. Added to last season’s chief talents in Craig Dundas and Kane Haysman, as well as the summer signings of Alan Julian (Dartford), Jessy Reindorf (Tamworth) and Ricky Wellard (Salisbury), and Sutton are very much one of the favourites for promotion.

The good news for the Fleet is that Southam misses out, having picked up a red card on his debut for Sutton. What’s more, top scorer last season Jamie Taylor (who also scored twice in Sutton’s 3-1 win against us in April) has today joined Margate.

One face back at the PHB Stadium could well be Harry Osborne, the Charlton youngster having played at full back against Fleet on Wednesday. He has just agreed a loan deal at Sutton.

Ed Miller has been Ebbsfleet United's communications manager and programme editor since 2014 and responsible for the club website since 2007. Contact him on ed.miller@eufc.co.uk
PrevPreviousBest wishes to youth player George
NextFleet 3-0 Sutton UnitedNext