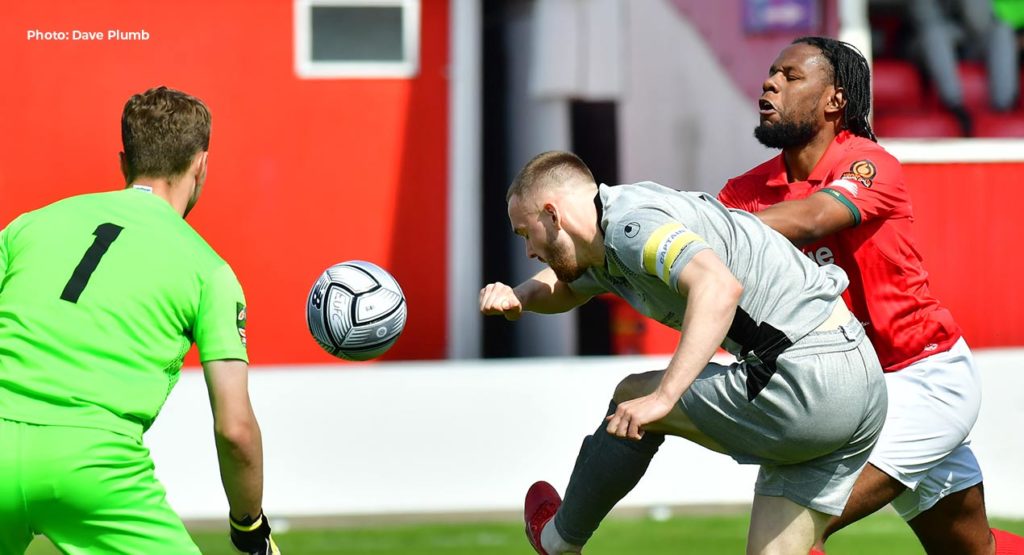 Two weeks on from Chippenham’s last visit to the Kuflink Stadium, the possibility of that being a repeat show in the play-offs was always there. But it was a mere possibility. Surely the Bluebirds had far too much to do to make it a reality?

And yet, here we are. Fleet take on Chippenham Town for a place in the Vanarama National League South promotion final. To suggest Chippenham weren’t exactly favourites for that billing isn’t to do them any disservice; they had plenty to do… and then some… to make it back here.

Their last five games after losing two on the spin to Dorking and Maidstone and changing their manager in between were all against sides still vying for play-off qualification. And to then face in-form Havant on the last day needing three points – and getting them – and then keeping another clean sheet to dispose of Dartford on penalties; well, nobody can argue they don’t deserve their place on merit.

For the Fleet, we enter our 15th play-off game in 11 years in tip-top form – top of the form table (with Chippenham fourth), Dennis Kutrieb’s side have responded exactly as their manager demanded and finished the season with a flourish – six wins and a draw, with Chippenham of course the only side to dent that run of wins in the 2-2 draw here at the end of April.

But now it’s into the knockout stages of the season, the “do or die” phase as Dennis Kutrieb termed it.

“I never feel pressure or I always feel pressure, so for me it’s not changing,” he said. “I have one aim, that’s the reason I came here, so for me it’s always the same. If it’s the last game, the semi-final or the 20th game of the season, as a manager you are always aware of what’s possible. Players are different, they just turn up and play. Maybe they feel pressure but they manage it well.”

But the Fleet boss is unconcerned about the pressure side of the game and prefers to put his faith in the work and quality his team bring to the table.

“We have a strong bench and we can always add something in the last 15 or 20 minutes of games,” he said. “Even against Dorking when we were under pressure, we could have scored two at the end. The boys know they have a reliable bench who can make an impact. When I need to make decisions on who to pick at the end of the week, they’re tough decisions. But nothing’s achieved so far, we need to move forward and get the right result. That’s when we’ll see how teams handle pressure.”

Kutrieb was in attendance at Princes Park on Thursday to witness Chippenham’s penalties victory and he praised Sunday’s opposition for making it through.

“Chippenham have been outstanding the way they came back so late in the season,” he said. “Maybe they have an advantage because they never expected to be here and just slipped in late. Maybe they have no pressure to go into the next round. But I’m happy we hadn’t played Thursday and used the eight days to get ready. We had two days off and every individual needs to make sure their head’s right, their legs are right because we have done enough from a technical and fitness point of view. It’s a do or die game and we want to do it.”

With the game put in such stark terms, the Fleet boss has called on fans to pack the stadium and get behind their side as they have done all season, home and away.

“The fans are loud and they try to push the boys,” said Kutrieb. “And that’s exactly what they need. It would be great to add more fans because the boys deserve it so we should try to get as many in as we can so the boys get the support they deserve.”

Chippenham’s supporters will board their coaches to Kent for the second time in three days after memorable scenes at Dartford – and they know as the lowest-ranked team in the play-offs that they’ll be doing so again if they make it to the final, regardless of what happens in the other semi-final.

Much will depend on how they react to a 120-minute toe-to-toe effort against Dartford but they will once again be a side full of spirit and togetherness as they showed at the Kuflink Stadium in April. Manager Gary Horgan will likely keep faith with a defence of senior players and hope the magic of their two most potent weapons – Jordan Young and Alefe Santos – can trouble the Fleet. He has been able to welcome back Spencer Hamilton to his back line who missed out at the previous game between the clubs, but elsewhere expect few changes for the Bluebirds.

This is Chippenham’s first play-off campaign since a pair of defeats in finals in the Southern League more than 12 years ago. For the Fleet, the primary aim is to prevent Chippenham making a third final. Achieve that and the season rolls on into another week.

Do or die, as the boss says.

TICKET SALES
This is an all-ticket match and season-tickets are not valid for play-offs.

Online ticketing sales for home fans at fleetlive.club will be available until 12.00pm on Sunday. We would advise pre-purchase for both your and our convenience in gaining admission to the ground.

In-person sales are not available on Saturday but will be open from 9am-12.30pm on Sunday at the ticket windows. After that time, no tickets will be on sale SO PLEASE ENSURE YOU HAVE A TICKET BY 12.30pm on Sunday.

We will once again have post-match live music after the game in the Hospitality Lounge… all supporters are welcome to join us after the final whistle for this free live entertainment.

Programmes are also on sale at the ground from the club shop, the popup bar as you enter the turnstiles, the Main Stand tea kiosk or in the Social Club behind the Plough End, costing £3. Advance-order programmes will be available to pick up from the club shop before the game and before you enter the turnstiles. We have already sold a third of our printed copies in advance orders.

Ed Miller has been Ebbsfleet United's communications manager and programme editor since 2014 and responsible for the club website since 2007. Contact him on ed.miller@eufc.co.uk
PrevPreviousPlay-off tickets back on sale online + revised opening times
NextFleet announce women’s and girls’ teams for new seasonNext