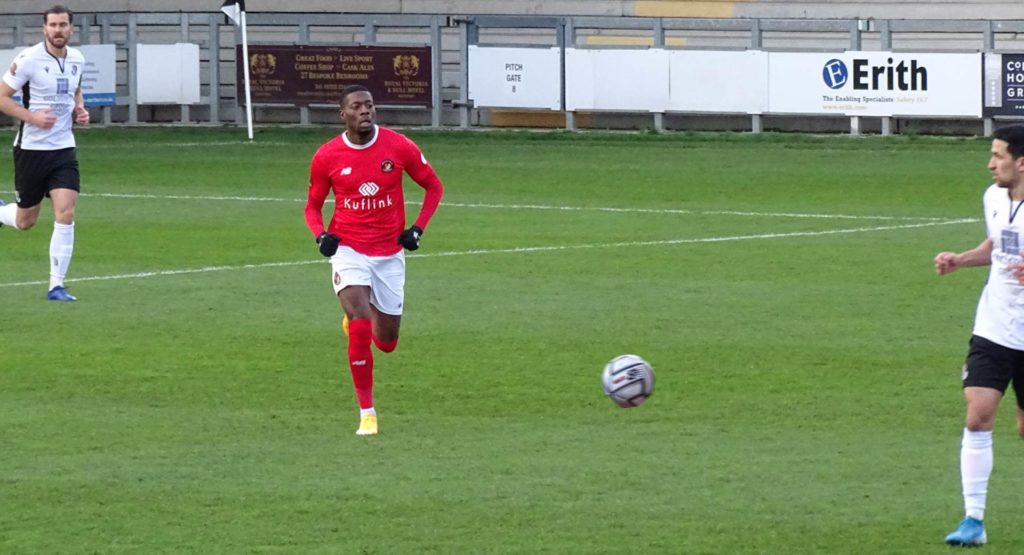 Despite tighter lockdown conditions nationally, elite sport continues and Fleet stay on the road to face their third away trip of five inside a month.

And it’s a first ever trip to Dorking Wanderers, last year’s play-off semi-finalists and many people’s favourites for this season.

Following the goalless draw at Dartford, Dennis Kutrieb will be looking to build on that clean sheet to close the gap on their fourth-placed hosts, especially with two games in hand on Dorking.

The two injuries at the beginning of each half at Dartford – to skipper Lee Martin and then Jake Goodman – will potentially require a reshuffle of the pack. Ben Chapman slotted into Goodman’s centre-back position on the day but Kutrieb does have more natural options in reserve.

“They’re a good side, they want to get promoted,” said Kutrieb of Dorking. “It’s a tough match and we need to recover from the Dartford game. I like the way Dorking play, I’ve watched them, I like the way their management team like to get them to attack and hurt opponents. But we will be confident after Saturday too and I am looking forward to it.”

Dorking’s management team, led by owner/manager Marc White, have scouted the Fleet on several occasions this season. White has been at the helm since founding the club in 1999 and has overseen 11 promotions in 19 years. A 12th is certainly within reach for a side that has spent four weeks at the summit already this season.

Their form has been a little patchy of late, however, without a win in four league games. A festive double against Hampton & Richmond Borough yielded only one point and top scorer Jason Prior is out for another three weeks after sustaining an injury on Boxing Day.

Dorking are the highest scorers in the division, with Prior responsible for 12 of their 27 goals so far. But even without him, Dorking can boast midfielder Wes Fogden with four goals and James McShane with three. Then there’s ex-Fleet favourite Luke Moore and former Havant striker Alfie Rutherford who got amongst the goals in our 3-3 draw at Westleigh Park back in March 2019.

White made a number of signings to build on last season’s play-off campaign, most notably ex-AFC Wimbledon and Gillingham full-back Barry Fuller who captains the side, although he missed Saturday’s game through injury.

While Dorking are searching for a first league win in four, in that time they have recorded two impressive home victories in the FA Trophy over Hungerford Town and Barnet, scoring five in those without reply.

Ed Miller has been Ebbsfleet United's communications manager and programme editor since 2014 and responsible for the club website since 2007. Contact him on ed.miller@eufc.co.uk
PrevPreviousPrinces Park performance pleases Fleet boss
NextDorking Wanderers 2-0 FleetNext