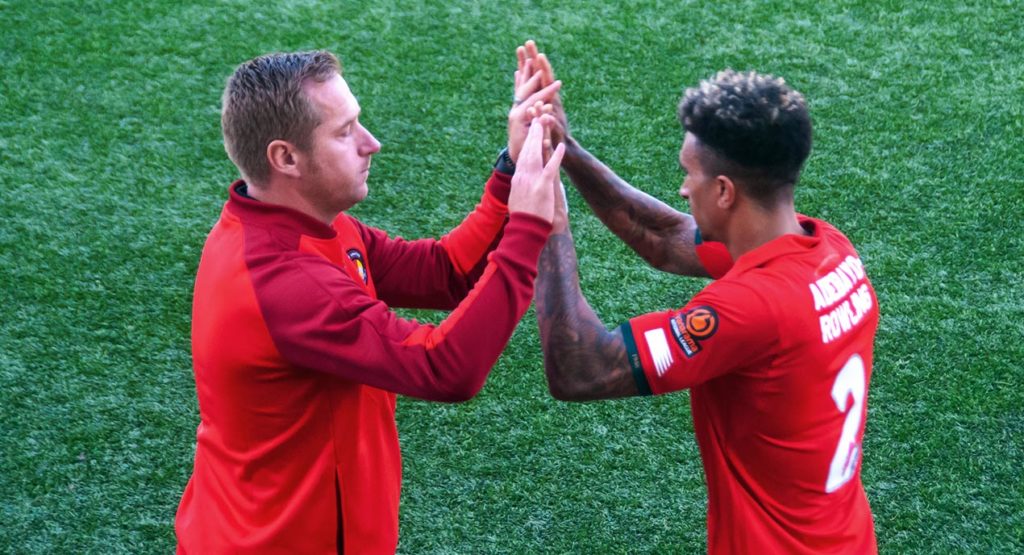 It’s always difficult to see past a cup tie on the horizon but Fleet have three vital league games to play until the First Round visit to Leyton Orient and Dennis Kutrieb insists knuckling down for those forthcoming matches is the absolute priority for his side.

Having taken a maximum nine points from the last three league games – in and around the simultaneous Emirates FA Cup progress – Fleet are in fine shape to get up a further head of steam against Eastbourne, Braintree and Bath City over the next eight days.

First up is the visit to Priory Lane to take on Eastbourne, whose healthy start to the season shows that 2020/21’s progress on the south coast was no flash in the pan and Fleet will seek to protect a good record against the Sports.

Fleet reported a clean bill of health following the heroics against Hampton & Richmond Borough, with only medium- to long-term issues affecting Christian N’Guessan and Adam Mekki prohibiting their participation.

For the in-form Tobi Adebayo-Rowling (pictured) and Michael West, Saturday’s visit represents a return to their former club from where they both joined the Fleet at the same time in summer 2020. Adebayo-Rowling thrived down the right side in Kutrieb’s rejigged tactical setup last Saturday and has become increasingly influential since his return from an injury earlier in the season. Another former Eastbourne player returning is, of course, Elliott Romain who enjoyed a number of seasons as the club’s top scorer.

For Eastbourne, the match represents a chance to rein in the Fleet. Two places behind us and with two more games played, the Sports are on equal points but a win for them would help cancel out the games-in-hand disparity. Danny Bloor’s side excelled last season after three successive campaigns of finishing in 18th place.

Eastbourne were third in the table when the season came to an end in February, way above expectations – and Bloor has followed up that foundation with what appears to be another tilt towards at least the play-offs in 2021/22. While an opening-day thrashing at the hands of Hampton – 5-0 at home – suggested the bubble might have burst, the Sports have improved considerably since.

Their only other league defeat has come at pacesetters Dartford but they inflicted Maidstone’s first defeat at the Gallagher Stadium recently and smashed Braintree Town 6-0.

Home form remains a little sketchy, however. The 5-0 loss to Hampton was offset by the 6-0 win over Braintree, but the Sports also tumbled out of the FA Cup to lower-division Horsham at home and last week managed only a 2-2 draw with out-of-sorts and 10-man Chippenham, their third 2-2 result at Priory Lane this season.

The two sides shared the points last season when Alfie Egan’s first goal for the club with 18 minutes to go looked like giving the Fleet the points until Dean Cox equalised four minutes later.

Cox is now plying his trade elsewhere but Bloor has kept the bulk of his squad together over the summer. Chris Whelpdale, Greg Luer and Charlie Walker still pose the biggest threat for the Fleet defence and midfielder James Hammond has been getting amongst the goals as well.

Together with Hemel signing Josh Oyinsan, those players have been responsible for 18 of Eastbourne’s 22 goals this season and the home side are one of three teams leading the goalscoring charts in the division this season.

And there’ll be one familiar face trying to stop the Fleet at the other end, with former Maidstone goalkeeper Lee Worgan having moved to the south coast from Dorking Wanderers last month.

The Sports are likely without Steven James due to a knee injury, while Charlie Lambert and Jayden Perez have departed on loan.

Tickets for the game can be purchased in advance online from here. The option to pay on the gate is also available.

Ed Miller has been Ebbsfleet United's communications manager and programme editor since 2014 and responsible for the club website since 2007. Contact him on ed.miller@eufc.co.uk
PrevPreviousFleet continue traditional community role
NextEastbourne Borough 0-1 FleetNext