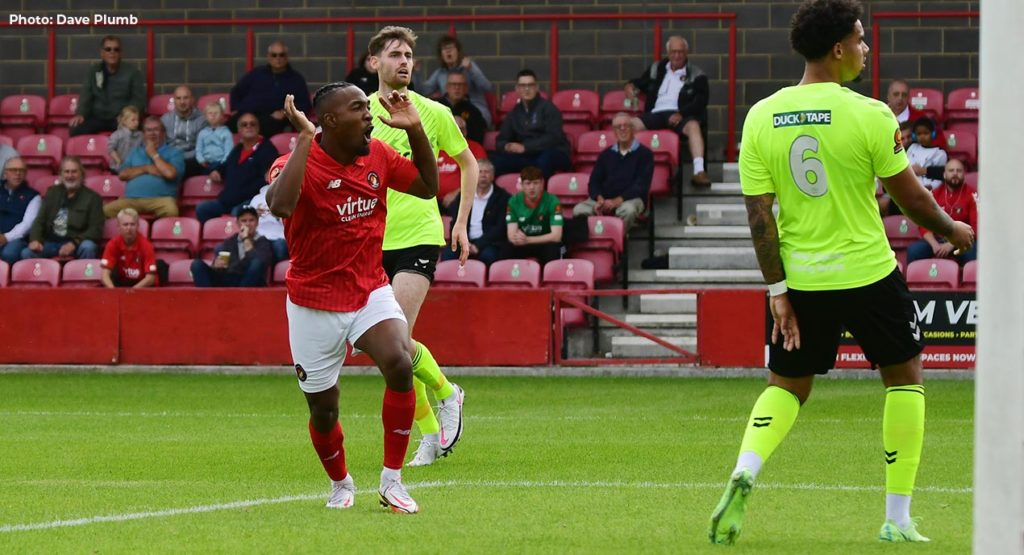 With the focus on Christmas and New Year matches for the past few weeks, what will become an increasingly climactic 2022 now stretches out ahead of the Fleet, with January providing a number of mouth-watering fixtures.

But with the formula for the Fleet being ‘one game at a time’, eyes are only on our first of three consecutive road trips this Saturday. And, like the Christmas decorations, post-Dartford celebrations continued into midweek before being boxed up and the hard work of the weekend ahead focused on instead.

The opening one of our away-trip trio (all to be played on 3G) affords the Fleet the opportunity to claim a first ‘double’ as hosts Hemel Hempstead Town become the first club we have played twice in the league this season, following our 3-1 win at the Kuflink Stadium earlier this season.

Having welcomed Tobi Adebayo-Rowling back from suspension with his assist in the win over Dartford last Sunday, Dennis Kutrieb has a couple more of his longer-term injured players nearing fitness as the opening month of 2022 will prove to be a busy and challenging one.

With players such as Ben Chapman, Alfie Egan and Adam Mekki all on the bench against Dartford, competition for the shirt is sure to be keen once again – though even players who settle for a subs’ place this weekend will be vital to the cause, with no fewer than nine goals having been scored by Kutrieb’s replacements so far this season.

For much of the early part of the season, Hemel appeared to be heading in the wrong direction, bottom of the table until late October and only beginning to see real progress from November. Former Oxford City boss Mark Jones replaced Lee Bircham and now the Tudors are closer to the play-off positions than they are to the basement.

While much of this turnaround in fortunes is pinned on excellent away form, Fleet can’t assume Vauxhall Road won’t be a difficult venue this Saturday.

Hemel are flying high after an excellent away win at local rivals St Albans City on Sunday, watched by 2,759, and that result is added to other creditable victories in recent weeks, all away from home – at Hampton, Chelmsford, Hungerford and Chippenham.

There has been quite the player turnover once again this season at Vauxhall Road, new manager Jones having strengthened in areas and Hemel’s previous team lineup last week named only two of the players involved in the side’s visit to the Kuflink Stadium back in August.

Notable signings include Dartford goalkeeper Craig King on loan, former Maidstone and Sutton wide man Dan Wishart plus Alex Addai, who scored against us in the FA Cup for Cheltenham Town in 2018/19. Experienced skipper and former Walsall and Southend midfielder Sam Mantom has returned to the midfield from injury, while two of the newest recruits are former Maldon & Tiptree and Wealdstone goalscorer Charlee Hughes and ex-Stevenage youngster Alfie Williams, both of whom scored last weekend.

This is Fleet’s fourth visit to Vauxhall Road, with two 1-1 draws either side of a memorable 2-1 victory in December 2015 when Matt Godden and Danny Kedwell struck late on to reverse a 1-0 deficit.

As the home club, Hemel will be supporting Shelter’s #NoHomeKit campaign by wearing their away kit, meaning Fleet will play in red to avoid any colour clashes. Advance tickets are on sale online and supporters can pay on the day.

Ed Miller has been Ebbsfleet United's communications manager and programme editor since 2014 and responsible for the club website since 2007. Contact him on ed.miller@eufc.co.uk
PrevPreviousDartford visit rearranged for February 1st
NextNew scoreboard – and new partnership opportunitiesNext