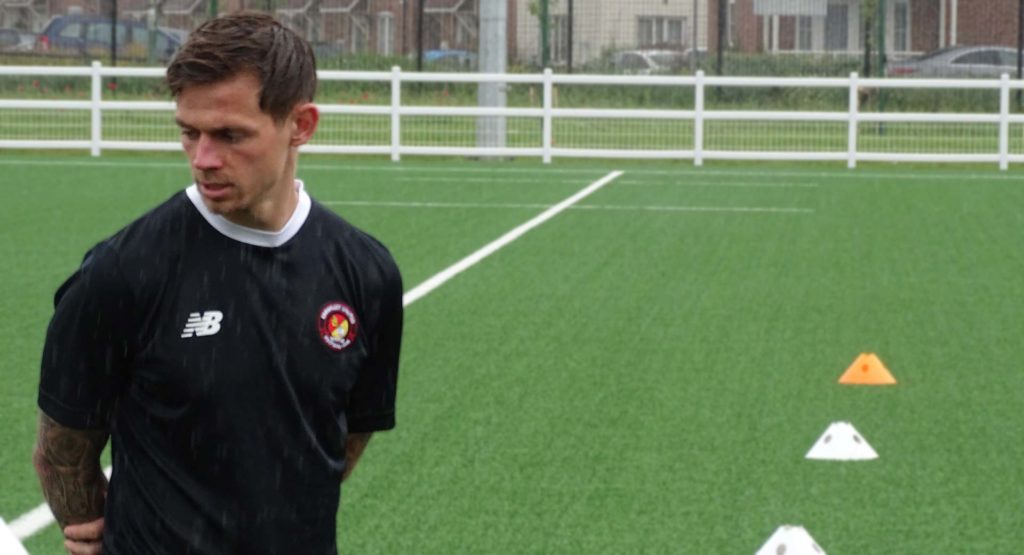 New signing Craig Tanner arrives at the Kuflink Stadium with a hunger and desire to attack that should please Fleet fans before a ball’s even kicked.

“I just love to be on the ball and I’ll take the ball in any situation and I’ll take the responsibility if I lose it, that’s on me,” the 26-year-old told the Fleet website in his first interview since signing. “It doesn’t matter if I’ve got three men around me or no men around me, it’s fun for me to keep the ball. That’s what I bring to the team, that entry into the final third, dribbling past people and trying to spot the pass which others might not see. So I just want to be on the ball and get goals and assists – that’s what brings me success and happiness.”

“My style of play is what I came through Reading’s academy (pictured) with – the ball on the floor, passing football, moving off the ball, linking up play,” Tanner explained. “Hearing what Dennis has to say about how he wants to implement that and his team plans is right up my street and was a major factor in signing for the club.”

The former Motherwell man had options this summer but was excited by what he sees happening at the Fleet on the pitch and the care and welfare the squad are afforded off it.

“I had a few offers a bit higher up and a few offers abroad so I definitely had a few to choose from but I spoke to people. And besides that, you know instantly where you feel like you’re going to be settled. I had that when I went to Plymouth, I knew that I’d be settled there and I had the same thing with Motherwell. And I’ve got that same feeling here, I’ve very much got that gut instinct and I’m excited to get going and to jump in with the lads.

“Ebbsfleet got in contact and invited me down. I met with Dennis and Damian and I went into it very open-minded. They gave me a tour of the club and we had a good long talk, they explained the steps they’ve taken so far, what they’ve got in place. How professional it was and the plans shown to me, it really excited me. It’s clear it’s a club they’re trying to build long-term. It’s not a short-term fix, which is also very appealing, and they’ve got everything in place to succeed. It’s now obviously down to the lads to succeed on the pitch and we’ve got no excuses because it’s all there for us.

“I’ve had a good bit of success in my career and I’ve also had the horrible side of football,” Tanner added. “I feel like that’s put me in good stead to sort of help lads who may be feeling a bit low or going through hard times. I definitely now look out for that welfare and the kind of care [Ebbsfleet have] because at the end of the day you’ve seen what happened with Christian Eriksen, that football is just a game. So if I see someone a bit down I’ll be the first one to go over and see if they want to go for a coffee or do something just to help. There’s not enough people willing to step outside that bracket and it’s good that side of things is here at the club.”

Tanner has played far and wide in the British Isles, in Devon with Plymouth and north of the border with Motherwell and the experience is one that’s moulded him as a player.

“I’ve pretty much covered the country,” he said. “I started off at Reading and came through their academy and went out on loan at Wimbledon (pictured) and then to Plymouth at the bottom of the country. I spent two years there and we had some good success and some really good times. Then I went up to Motherwell and had a couple of seasons there. An injury set me back for a while and I took a bit of time out of football and then I had a good season at Aldershot.

“I’ve been lucky in my career, I’ve managed to play in some big games at quite a young age, even when I played at Plymouth and then up in Scotland you play at Celtic Park, Ibrox and Hampden Park so that’s next level. That’s one you can remember and tell your family about as you get older, they were special moments for me.”

That time in Scotland was a special couple of seasons for the Fleet’s new signing and despite some England-Scotland rivalry of late this week, Tanner’s got a soft spot for his former home.

“I think it gets a rough time from English players and press,” he said. “I think until you go up there and experience it, you realise that actually it’s a really good league. Even clubs like Hibs and Hearts you’re looking at 20,000 fans each time and then obviously on top of that you’ve got Rangers and Celtic so I think it gets a bit of a rough time from the English press. It’s somewhere I loved playing and I settled in really well up there.

“My missus’ family is half-Scottish so [on Friday night] they’ve given me a bit of stick. Scotland’s obviously got a bit of a soft place in my heart now but overall I wanted England to win no matter what. A draw is probably a fair result in the end.”

Now settled back nearer home in the south, Tanner’s keen to get going at the Kuflink Stadium, where he’s familiar with a few of his new colleagues.

“I’ve played against a few of them in my time. You always cross paths with people, that’s how football is. I know Alfie Egan from when he was a young lad when I was at Wimbledon and I talked to him a little bit about the club and stuff like that. I’ve asked him already if there’s a bit of a car school going so that should be handy!

“I think it’s important that everyone keeps themselves ticking over. I finished a little bit later with Aldershot than a lot of players in this division. I’ve taken a bit of time off to refresh, spend a bit of time with my girlfriend and my family. I’ll be building up for pre-season now, the first day back is about being as fit as you can and then building that up for the first game when the three points start and the whistle blows.”

Ed Miller has been Ebbsfleet United's communications manager and programme editor since 2014 and responsible for the club website since 2007. Contact him on ed.miller@eufc.co.uk
PrevPreviousFleet throw a Tanner in the works
NextJoin us for England’s final group game!Next