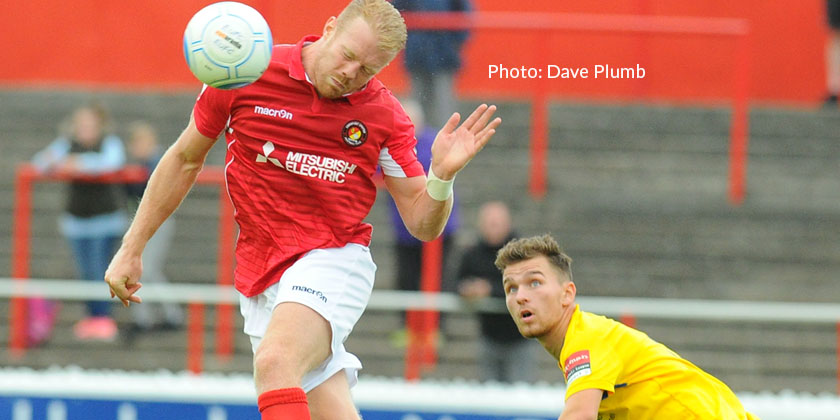 Fleet boss Daryl McMahon is expecting an in-form Havant & Waterlooville to provide a tough obstacle to his side’s ambitions of reaching the Fourth Qualifying Round of the Emirates FA Cup for the first time since 2013.

McMahon, who as a player skippered the Fleet in that last outing to the final qualifying round, feels his opposite number Lee Bradbury has got the Hawks firing on all cylinders since their relegation from the National League South.

“It’s been a good decision from Havant to stick with Lee,” the gaffer told FleetOnline. “He’s a good manager with a very good side. Me and Steve Gritt watched them on Tuesday night, they thoroughly deserved to win. They created lots of chances. Them getting relegated was a bit of a shock considering how good a side they had and Lee is repaying the faith shown in him this season. I’m sure they’ll come straight back up with the players they have at that level.”

Despite that unexpected relegation, Havant have kept together the bulk of a squad that was tipped to challenge for promotion last season – and they have won nine of their last 10 games in all competitions, unbeaten since an opening day defeat against current Ryman Premier leaders Leiston. Having been 2-0 down at home to Worthing on Tuesday night, the Hawks fought back and clinched a winner in the final minute, a spirit that McMahon will be wary of come Saturday.

And he’s expecting a different game to Fleet’s previous outing in the Cup, a 5-0 win over Havant’s promotion rivals AFC Sudbury. “No disrespect to Sudbury,” McMahon said, “but they came up from the league below. I think Havant are an altogether different prospect and they’re quite a change from other Havant teams that I faced as player in this league and even as a manager against Lee last season. This Havant side is bigger, more energetic, very confident and very used to winning.”

Of course, that’s something that could be said about the Fleet of late as well, with goals plentiful at Stonebridge Road over the past few weeks and it all leads up to one of the more intriguing ties of the Third Qualifying Round.

FA Cup success is still relatively fresh in the minds of Havant, who of course enjoyed a run to Round Four eight years ago and with it the fantastic achievement of leading Liverpool twice at Anfield. They have since graced the First Round proper three times while Fleet’s track record in the competition has been average.

That’s the motivation for the Fleet boss this time around, with real desire in the camp to progress – although it’s a case of a game at a time and nobody is looking beyond the 90 minutes against Havant.

With Aaron McLean a long-term injury concern, Fleet are also mulling over the fitness of three more players – Kenny Clark, who missed out last week through injury, as well as Dean Rance and Sean Shields.

“Kenny had a tightness in his back and right side ,” McMahon said. “Dean is still suffering from stiffness in his back too while Sean Shields has a bit of an injury as well which forced him to come off last week and he might miss out. But we’re due to assess them in our final training session this week. It’s nothing major but it’s three potentially available, or three potentially not! It could go either way.”

Ed Miller has been Ebbsfleet United's communications manager and programme editor since 2014 and responsible for the club website since 2007. Contact him on ed.miller@eufc.co.uk
PrevPreviousJordan Parkes departs the Fleet
NextFleet urge support for Jack Howard’s campaignNext