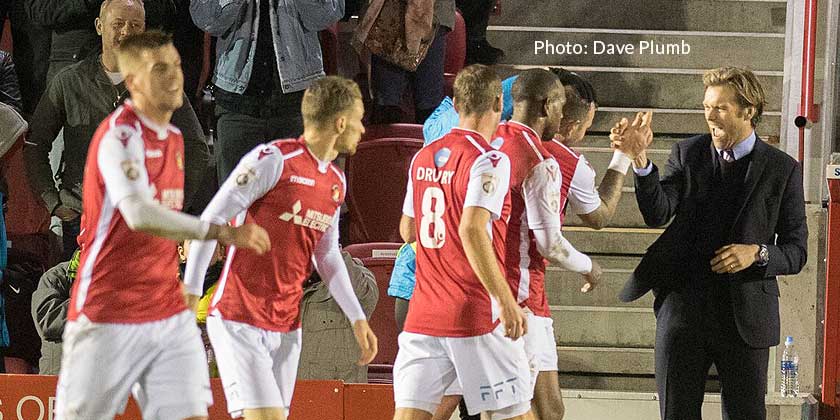 While even the Fleet boss might not have expected a winning goal so late in the game this afternoon, he was nonetheless confident his side had the tools to hurt Eastleigh as the FA Trophy stalemate wore on.

After 77 minutes of goalless action, Fleet nudged ahead and then won the game with two moments of genuine brilliance and the players who scored didn’t surprise Daryl McMahon.

“I just always felt that moments of quality with Shields, with Weston, Coulson, Powell, Kedwell, we knew we had the players in the team that could produce a goal and in the end we did,” he told BBC Radio Kent’s Charles Webster. “It was a bit of a bitty, rubbish game really. It was scrappy. We said at half-time they’d made it quite scrappy, they tried to stop the game and frustrated us a little bit in the first half.

“Keds can move a lot better than he looks. If you see him every week, he moves his hips really well, whether it’s to get crosses in or shots away, he can. I’m delighted for him because he’s been excellent for us and it’s another goal for him.

“Then it was a great little run inside from Weston. We watched some clips and we thought that was an area we could exploit, coming off the sides and I thought we did. Weston had a couple of opportunities, particularly second-half, he was excellent. And probably Shieldsy [similar] in the first half. The two stands seemed to attract the ball today and the two of them played really well.”

The Fleet boss also praised his skipper Dave Winfield after the Fleet No.5 started his first game since early August. “The challenge in the second half on [Chris] Zebroski was excellent,” McMahon said. “It shows you what you missed. I’ve been saying it for two or three months and I think he’s the best centre half in the league. That tackle showed you what we missed.”

Weston’s goal meant Fleet avoided the need for a long trip to Eastleigh on Tuesday and McMahon was much relieved about that. “It’s huge for us,” he claimed. “Fylde drew today with Chester so they’ve got a replay Tuesday night, they’ve had a lot of games lately. Every manager will be the same, you want to avoid replays if you can just because you’re going into that really busy Christmas period that we know is hectic for all of us. It’s good we haven’t got to travel down there [to Eastleigh], we can have another training day.”

McMahon also revealed he’s still in the market to improve his frontline heading into 2018 while at the back, he’s awaiting news of Yado Mambo’s knee injury.

“Yado’s injury isn’t too good news at the minute,” he said. “We’re just dissecting what we can do for him.”

And on a potential striker signing, the manager said: “We’d like to bring someone in, another handful, another goal threat for us if the right player becomes available. I don’t think you can sit on your laurels, I think it’s important that when you’re doing well, if there’s an area of the team you can improve on, we have to take it if it’s available. But if it’s not out there, it’s not out there and we’ve got some good players.”

Ed Miller has been Ebbsfleet United's communications manager and programme editor since 2014 and responsible for the club website since 2007. Contact him on ed.miller@eufc.co.uk
PrevPreviousFleet 2-1 Eastleigh
NextEarlybird offer for Wembley final ticketsNext