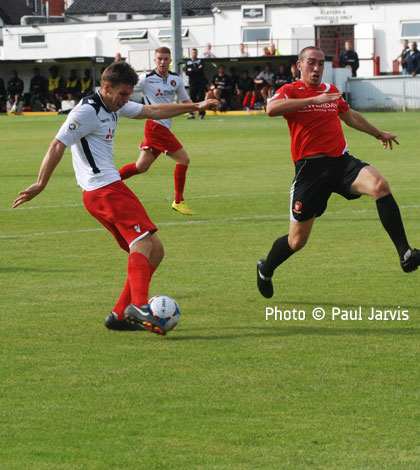 A Fleet side always likes to do things the hard way and their first away points of the season came as no exception. Steve Brown’s 10 men – following Preston Edwards’ 33rd-minute dismissal – held on and then added two goals late in either half to erase the disappointment of Tuesday night.

The visitors made three changes to their line-up, Aiden Palmer recalled with Shane Huke on the bench, while Matt Johnson earned his second start of the season in place of Tommy Fraser and Alex Osborn got the nod ahead of Matt Godden.

Hayes didn’t look like a relegation-threatened side in either game last season and they appeared bright and resilient again here early on, new signing Louis-Rae Beadle beating Palmer to deliver a cross but Matt Ruby couldn’t quite apply a finish from close range. Fleet found it difficult to get going with the home side doing a good job of stifling the midfield and they nearly went ahead on nine minutes when Matty Harriott was left free inside the box but Preston Edwards was down smartly to stop the shot with a leg.

It was a fairly nondescript opening half-hour as neither side seemed to have the guile to create a chance of note but it all changed on 33 minutes. A long ball towards the Fleet box was gathered by Edwards under no real pressure outside his area. It was highly debatable whether there was any form of ‘goalscoring opportunity’ but the referee produced a red card and the Fleet keeper was walking for the third time in his club career.

Brandon Hall immediately plugged the gap, but Billy Bricknell made way as Fleet went with one up front. Hayes were encouraged straight away and ex-Fleet Trophy winner Gary MacDonald went close with a free kick before Dean Inman’s header beat Hall but also the bar.

Fleet were shaken and looking to regroup before the whistle but in the event didn’t need the break to steady the ship. A minute before half-time, Osborn’s run and pass set up Sheringham and the Fleet top scorer whistled a shot past the home goalkeeper with great technique.

It was touch and go at moments in the second half as a dogged Fleet kept the home side at bay and, more importantly, outside the box as much as they could. Hall watched two shots go over and wide early on after the break before he was handed an underhit backpass by Anthony Acheampong but Louis Rae-Beadle could only shoot just wide as he capitalised for Hayes.

Hall continued to perform well, denying former Bishop’s Stortford substitute Cliff Akurang and Danny Wishart. The closest the home side got was a shot from distance from Harriott that cannoned back off the post with Hall this time a mere spectator. That miss was Fleet’s cue to win the game, however, and Anthony Cook took up the gauntlet, dummying Adam Everitt before firing home for 2-0.

With six minutes remaining, both sides still had chances, Hall saving twice at one end while Cook forced a save from the goalkeeper at the other before leaving the field to cheers from the travelling fans who finally had some reward for their hours invested.