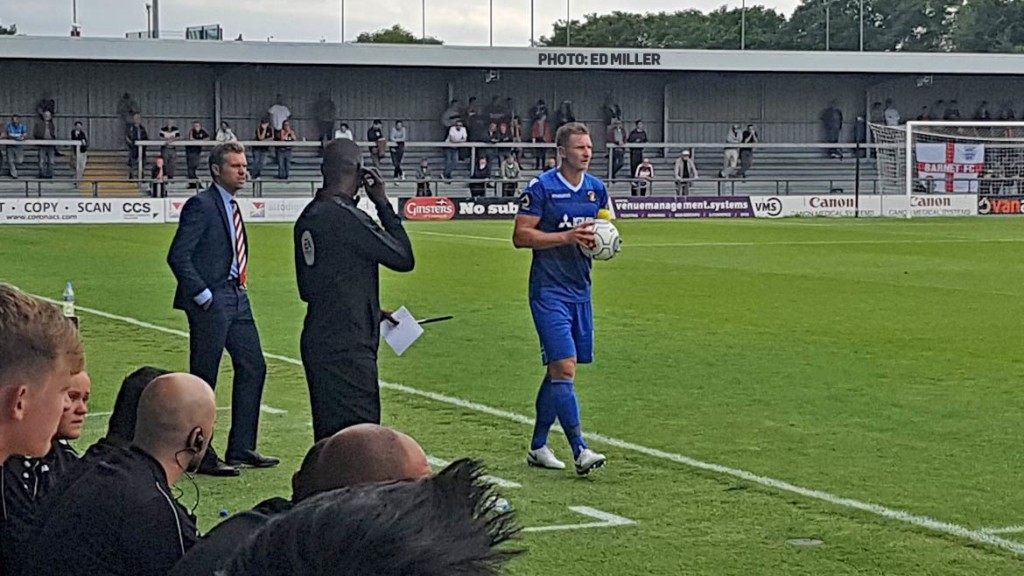 Fleet’s 3-0 win no bolt from the blue

Ebbsfleet United were applauded off at The Hive after an excellent 3-0 win, only their third ever such victory away at Barnet, but Daryl McMahon insisted the win for the blues was no bolt from the blue.

“We have been performing well so it’s not a bolt out of the blue,” he told BBC Radio Kent’s Charles Webster. “I know if you look at the results you might not think that but if you’re actually watching the match, I think we have been performing and creating chances and it was only a matter of time before we started taking them. People get carried away with the scoreline whereas the performances have been the same.

Despite that candid assessment, the Fleet boss was unquestionably delighted with his side’s finishing and he felt they were comfortable for large spells of the game.

“I thought they had that first 15-minute spell [after half-time] like everyone will do, especially at home as well, I thought they had a go at us,” he said. “They put a lot of crosses into the box and forced us to change our shape a little bit to combat that. And then the subs that come on I thought were excellent as well, they kicked us on to another level.

“We created a number of chances again today and we took three of them. It was about time – I was glad for Keds, it was a great second touch to drag it away, the composure was very good and Shieldsy does what no-one in our team normally does, is follows in for a rebound! And it was a good finish.

“It was a good time to score [the first goal]. I felt we could get in behind them and we did in the end. It was a quick free-kick from Jukesy, which we’ve been talking about as well, not always setting up and letting the other team set up, can we do something bright? And it was a good little ball from Jukesy.

Dean Rance returned to the action as a second-half substitute for his first match of the season and McMahon valued his contribution at a point when Barnet were striving for the equaliser.

“I thought Rancey was magnificent in that spell where they got a lot of crosses into the box and they had [Shaq] Coulthirst and Charlee Adams stepping in behind [Byron] Harrison. I thought Dean shored that up and was terrific on second balls and kept the ball for us as well.”

Another new sight on the subs bench was the lack of a back-up goalkeeper, with five outfield players named on the bench. “We’ve played something like 150 games with Milo on the bench,” McMahon said before the game, “and he hasn’t been needed in all that time. It would be pretty typical if we got a sending-off or keeper injured today now!”

Ironically, there was some concern when Nathan Ashmore was knocked flat following a challenge midway through the first-half and he had more than five minutes of treatment while the Fleet staff watched on anxiously from the sidelines, but McMahon said there were no goalkeeper concerns despite his pre-match assertions.

“We had Chris Bush ready to go on,” he said, “Bushy’s played there before and he is 6ft 3 as well, similar size to Ashmore. But Ash is OK.”

And the goalkeeper was on top form when called upon again this afternoon, stretching to keep out a Dan Sparkes free-kick to keep the scores level.

“If you look, we’ve conceded three goals in five games and the three of them were very avoidable,” McMahon said. “Ash has made two saves [in that time]. Again today, he’s made two good saves. McLaughlin at Hartlepool and Alabi at Leyton Orient… two really good saves that maybe some goalies don’t make. That’s five opportunities in five games teams have had against us and we’ve had a number of opportunities against other teams. So we’ve got to just take them.

“To come here and win 3-0 is great for us as a club. But now we know we need to get our head down and get ready for Aldershot in a week.”

Ed Miller has been Ebbsfleet United's communications manager and programme editor since 2014 and responsible for the club website since 2007. Contact him on ed.miller@eufc.co.uk
PrevPreviousBarnet 0-3 Fleet
NextDouble-century Drury rates latest Fleet squadNext