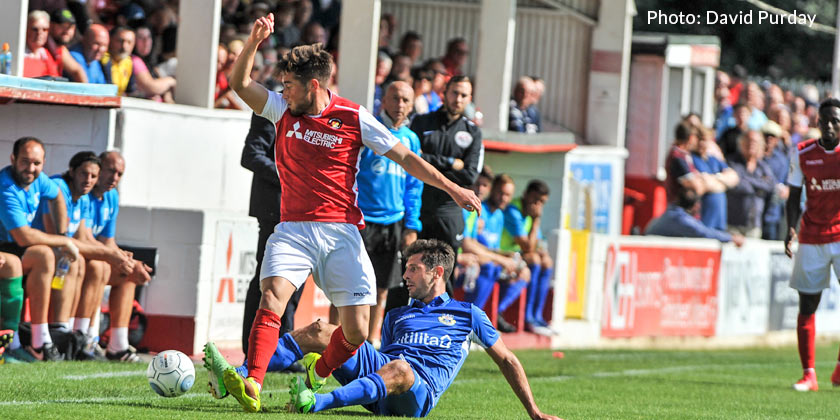 Daryl McMahon insisted his side intend to take the Buildbase FA Trophy seriously as the 10th anniversary of Ebbsfleet United’s Wembley win rolls around.

On this weekend a decade ago Fleet embarked on the Trophy journey that would take them to the National Stadium, with Chris McPhee – the man destined to score the winner in the final – netting twice in a 4-1 First Round win over Carshalton Athletic.

And McMahon, who was part of the Stevenage squad that had lifted the Trophy the year before in the new Wembley’s first ever final, believes his players have what it takes to emulate the feats of their predecessors.

“Everyone standing in our way is a team from our division or lower and we’ve shown since August we can compete with that,” McMahon told FleetOnline. “The fact we’re facing a team from our division is something I’d definitely prefer at home in the sense that it is like a league game again for us. We’ve got three wins in a row at home and we want to keep that going even though we know we face a tough team in Eastleigh. We’re in decent form and when you’re in that kind of mindset, you want to do all you can to continue it.”

The Fleet boss has players back from injury this weekend but isn’t likely to mix things up greatly, with his settled side enjoying a purple patch on home soil. “We’ll take it seriously,” he said. “It’ll be the strongest available team we’ve got on Saturday out there, there won’t be anyone getting rested.”

Yado Mambo continues to be sidelined but Dean Rance returned to full training in the week, while Bradley Bubb, Febian Brandy and Jack Payne were also put through their paces on the training ground and could all be involved in the coming weeks.

The return of Dave Winfield as a substitute against Guiseley was a filip for McMahon and his staff but the manager is resistant to throwing his skipper into a full 90 minutes off the back of that.

“Dave’s done brilliantly to get back but it’s important we don’t kill him in the process,” McMahon said. “He’s only had 15 minutes of football since the Maidstone game in August, so we’ve got to be careful and not just chuck him out there.”

Darren McQueen is the next long-term absentee who will begin a rehab programme shortly but his full recovery is still some months off. “Darren’s still in his leg brace which comes off next week,” McMahon explained. “He’s going back to the specialist next week and we’ll see where he’s at then. That will be the next stage of his rehab, probably six to eight weeks, which will be really light rehab, basically walking again and not putting too much resistance on the injury. We’re hoping February if we’re lucky but he’s too young to rush back with that injury.”

Fleet have a busy programme of four matches in eight days over the festive period but the manager wants them to enter that off the back of a good result against Eastleigh and he’s positive that his players are equipped for a cup run.

“We’re in a different position this year; last time we were always under a bit of pressure to get out of the South, that was the priority,” he said. “This year it’s not the same weight of pressure so it’ll be nice for us to have a run in the Trophy and give the fans something to cheer about. You can get some great days and memories off the back of a good run and it’s a realistic target to win. But we have to negotiate each round before we can even think of that and Eastleigh are tough and experienced and will believe they can go all the way, too.”

Eastleigh, one of McMahon’s former clubs, are having a tough time of it, lying in 18th place far outside their pre-season expectations. Having drawn 4-4 at home to Bromley last weekend, they passed ourselves as the division’s draw specialists and manager Richard Hill and assistant Andy Hessenthaler bemoaned the fact their side had to score four times at home to earn a single point.

The Spitfires have a casualty list that includes injuries to defenders Michael Green, Reda Johnson and Ryan Creswell. Midfielders Danny Hollands and Sam Togwell plus striker Ben Williamson are also on the treatment table. Eastleigh also lost the services of on-loan midfielder Simon Heslop in midweek after the York City man – who won the Trophy last season – returned to his parent club.

Nonetheless, Hill intends to name a strong side for the visit to the Kuflink Stadium with striker James Constable having long been a thorn in Fleet’s side while last season’s Leyton Orient top scorer Paul McCallum hit a hat-trick last weekend.

Eastleigh have only been as far as the quarter-finals once and the Trophy is a competition they have traditionally failed to sparkle in but the message from the Spitfires camp is this is one they want to do well in. The 2-2 draw in the league earlier in the season sets it up nicely, with little to choose from between the two sides – but for all their problems this season, Eastleigh looked like a capable attacking force and have continued to find the net despite their league position.

They will come against not only their former skipper in McMahon but three former players in Bubb, Andy Drury and Luke Coulson. Revelling in his new No.10 role since that game, Coulson said in his piece for the Football Writers’ Association, “our encounter earlier in the season… I walked off that day thinking that my former employers must have returned to Hampshire with the opinion that selling me in January to Barnet was a great decision. This weekend, I’m focused on putting on a performance that my former club won’t forget but I want to help the team move one step closer to every young footballer’s dream, playing at Wembley.”

A reminder to fans that this tie is an all-pay game, with no season tickets valid. Standard matchday ticket prices apply, with the exception of U12s who will cost £1. A reduced 24-page matchday programme is available at the lower rate of £2.

Ed Miller has been Ebbsfleet United's communications manager and programme editor since 2014 and responsible for the club website since 2007. Contact him on ed.miller@eufc.co.uk
PrevPreviousSwanscombe End closure date confirmed
NextFleet 2-1 EastleighNext