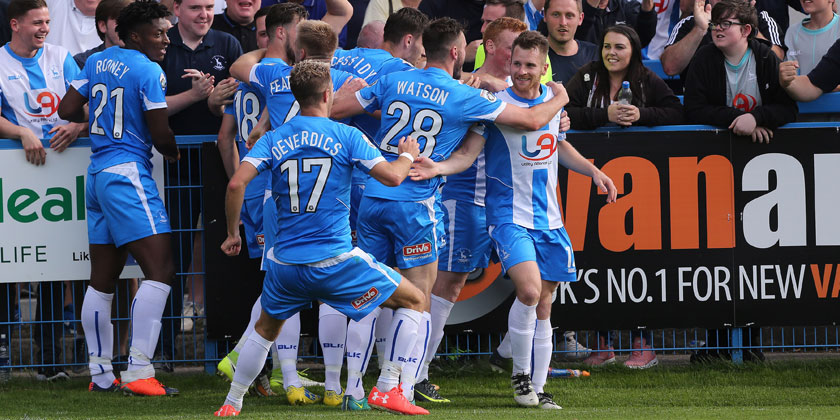 It’s new territory for the Fleet once more as Hartlepool United travel to the Kuflink Stadium for the first ever meeting between the clubs this Saturday. After 96 years of Football League existence, the Co. Durham side fell into non-league at the end of last season and until lately, haven’t shown signs of an immediate return.

That could all be about to change with Pools lying second in the form table, having lost only one of their last nine league games and hot on the heels of Tuesday’s 4-0 win over FC Halifax Town, with them climbing above the Fleet to a season’s high of 11th.

Daryl McMahon can afford his squad a little breathing space after this Saturday with a blank weekend beyond that, but first he wants his players to make up for what he thought was a poor performance at Woking in midweek.

“It was self-inflicted,” he told FleetOnline. “We just didn’t play very well and it’s frustrating when you consider, even in that game and the way we performed, it could still have been a draw. That’s not taking anything away from Woking, we were two even teams on the night, but we were playing at 40% of what we’re about. That’s not acceptable from us, it’s well below where I expect us to be and I expect to see a reaction on Saturday.

“I can put my hand on my heart and say Torquay home and Woking away aside, when we were distinctly below par, the majority of games regardless of the result, we were in and around it. We need to be back at our best on Saturday to get anything.”

McMahon fancies Hartlepool to be in the reckoning come the end of the season, despite their distinctly wobbly start to life in the National League, saying: “They got a new manager in, turned over almost a whole new squad, so it’s always difficult for all of that to gel together straight away. They’re one of the form sides in the division but every week that’s the challenge for us, be it against big clubs, form sides, whoever, all the games throw up obstacles. We’ve shown we can live with that and we have to dust ourselves down and do so again.”

Dusting themselves down is something the Fleet have had to do twice this week… once after the disappointment of decisions going against them at Wrexham and once again for a lacklustre display at Woking. “I’ve said Wrexham was disappointing the way we lost it when we didn’t deserve to lose it. I’ve made feelings clear on that, I believe we’ve sent the FA the evidence and I’ve made my feelings clear about our display on Tuesday. Now we look forward.”

McMahon hopes to have Andy Drury back in contention after he showed no after-effects from his concussion on Tuesday. Bradley Bubb is also expected to make the bench at least following a week’s rest on a minor hamstring issue and he trained Thursday and Friday. Febian Brandy also felt a tightening in his hamstring after getting through plenty of work on the training ground but the Fleet boss doesn’t expect to involve him this weekend. “The timing has been bad for Febian as he’d got through a lot of physical exertion before that. He’s back in training this week but Saturday is probably too early for him. We’ve got a friendly game coming up for Dave Winfield that he’ll play in as well, along with Bradley Bubb. And then we’ve got a two-week period to really build people’s fitness up.”

That break is welcomed by McMahon who wants a big effort this weekend so that his players can recuperate during their mini-break. “The blank weekend gives us a week to take stock and we’ve got the friendly then to get minutes into players and assess where our other injuries are at. Even players who are playing every week but carrying minor knocks, they need a rest as well just to have a little bit more time for their bodies to bounce back. But before that we need a big performance and big push and the lads know they’ve then got a period of recovery before we face Guiseley on 9th December.”

Hartlepool are likely to welcome back top scorer Jonathan Franks who sat out Tuesday’s big win over FC Halifax Town. Having been booed off after losing to Aldershot last weekend, Pools’ lowest crowd of the season in midweek witnessed their best display and manager Craig Harrison is demanding they continue to improve at the Kuflink Stadium.

The visitors have a few injury concerns with defender Carl Magnay out alongside influential midfielder Ryan Donaldson, Keith Watson and striker James Thorne. Full back  Blair Adams will face a late fitness test.

One familiar name in the Hartlepool squad is that of Nicky Deverdics whose 16 goals from midfield helped drive Dover’s 2015/16 play-off push. Elsewhere, midfielder Jack Munns has played against us before for Charlton’s development squad before winning the National League with Cheltenham Town while striker Rhys Oates has been hitting some form of late. Harrison has also drafted in another striker in Tomi Adeloye, who was part of the Chelmsford side that inflicted the first ever defeat of McMahon’s managerial career in the FA Cup of 2015.

Hartlepool lost their first two games against newly promoted sides, falling to both Maidenhead United and AFC Fylde earlier in the season, but they demolished the other in FC Halifax Town in midweek. Fleet will be desperately hoping they can be the third promoted side to add the Pools scalp to the collection this season.

The new club shop opens in the Main Stand on Saturday so feel free to take a look inside and stock up on some early Christmas presents… there are only two home league matchdays until the big day!

Ed Miller has been Ebbsfleet United's communications manager and programme editor since 2014 and responsible for the club website since 2007. Contact him on ed.miller@eufc.co.uk
PrevPreviousMaidstone game rearranged
NextFleet 3-0 Hartlepool UnitedNext