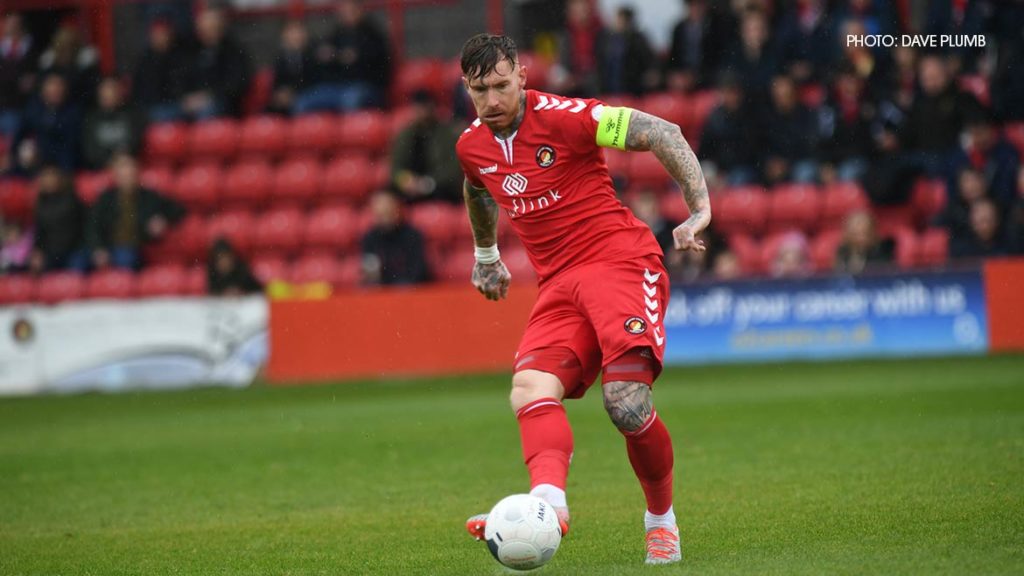 There’s fire in the Fleet belly of late and Kevin Watson knows that if he can continue to harness that in the right direction then his side will only be going one way.

The Kuflink Stadium kicks off a busy November with six ex-League sides awaiting the Fleet this month. We start versus in-form Chesterfield this Saturday, with Notts County, Hartlepool United, Stockport County, Barnet and Wrexham all on the horizon before your advent calendars go up.

But the big names ahead are of no consequence to Watson who knows, be it Chorley or Chesterfield, the challenge for his charges is the same.

“I’ve made it common knowledge that it’s just one game at a time,” he said. “I’ve got a great group of lads and it’s not just the starting eleven. I can call on any one of the squad of players I have and I know they’re not going to let me down.

“I’ve been involved at this level before and there are no easy games. Nobody’s running away with it and down the bottom Chorley have had a tough start but they’ve drawn a lot and they’ve not been smashed out of sight many times. So it’s a tough month, yes, but it’s a tough league whoever you play – be it teams at the top or at the bottom.

“You fancy your chances when you’re in form and we seem to be getting a tune out of the boys at the moment with the way we’re trying to play. There’s a smile on people’s faces around the club and long may it continue.”

Watson will have to do without the services of his skipper (pictured above) this Saturday, Jack King’s fifth yellow card of the season at Chorley meaning he’s suspended.

“When I first came in as assistant, Garry Hill was telling me Kingy was on four bookings,” Watson said. “He’s managed to sit on them for about five games which is hard for a centre-half. He’s been magnificent, a real leader and superb for me so of course he’ll be a big miss this weekend.”

Jamie Grimes is the obvious contender to fill in there, having come off the bench last weekend to win the penalty, while Ayo Obileye is also an option.

Grimes was the man intended to replace the injured Jordan Holmes in goal at Sutton but Tyler Cordner in fact volunteered, having enjoyed a couple of shifts between the posts in his younger days!

Holmes has recovered from concussion to challenge Harry Palmer for the shirt once more while Alfie Egan returns to the squad after illness.

Fleet’s last three wins have illustrated an ability to dig in and although fitness levels are still to peak, Watson is pleased with what he’s getting from the players.

“There’s no quick fix to fitness, it evolves,” he said. “But I’ve got Tristan Lewis and Craig Lewis in to help me. Craig’s on the fitness and he’s the top of his game. He was Portugal’s fitness coach at the 2010 World Cup so he’s worked at the very highest level. We’re lucky to have him and he’s working with the players again this week. It’s not an overnight fix but you can see we are getting there.

“They always say, can you do it on a cold Tuesday night up north? Well we did and it was always going to be a test for us regardless of where Chorley are in the league. They’ve had a lot of draws and don’t concede many goals, draws against good teams in this division, so to go there and win 4-0 is obviously very pleasing.

“I wasn’t happy at all with the first-half display even though we found ourselves 2-0 up. We weren’t at our best so we were quite fortunate. But on the flip side we responded, scored two cracking goals, hit the crossbar, hit the post and even had shouts for a penalty so to come away from that game after seven hours on a coach with a 4-0 win was really promising.”

Seven goals from two games sees Fleet as one of the highest scoring sides outside of the play-off contenders and now they must try and give the home fans more to cheer about.

Chesterfield will be another tough visitor, however. One of the few teams to have suffered a spell at the bottom of the table beneath the Fleet this season, John Sheridan’s side took 11 games to win three points.

But he has won four of his last five league outings to take the Spireites to 18th in the table and no doubt ease what must have been considerable pressure from a demanding fanbase.

One of the pre-season favourites for the title, Chesterfield fans must hope they can emulate Tranmere Rovers, who climbed from 18th place two years ago to streak through the play-offs to promotion.

Three of their four recent wins have come over fellow strugglers AFC Fylde, Aldershot Town and Wrexham while last week’s impressive defeat of Notts County will also have done confidence levels no harm.

The scorer of that winning goal, Curacao international Gevaro, is on loan from Oldham Athletic and he supplements a classic front line partnership of the 6ft 7in Tom Denton and prolific Scott Boden. The visitors can also call on former Oxford City and Wrexham striker Mike Fondop.

Manager Sheridan’s son Jay has recently forced his way into the left-back position, deputising for the injured David Buchanan, while a formidable barrier in defence is former Aldershot centre-back Will Evans. He was the player who equalised late on for Chesterfield in the dramatic 3-3 draw at the Proact Stadium in January and moments later went in goal to save Michael Cheek’s 96th minute penalty.

Midfielder Sam Wedgbury is another doubt for Sheridan who told the Derbyshire Times, “We should be in the top three with the players I have got and we are not so in a way I am failing in doing my job.

“I don’t think we have turned a corner. I think we have got to get on a bit of a consistent run and consistency in our game and I think that is what we are showing. We are still in a very vulnerable position.

“Ebbsfleet and Chorley are the next two games and they are fighting for their lives and they are all hard games. I don’t take anyone for granted and I know if we don’t turn up then we are going to get beat.”

The match IS segregated and Chesterfield fans should enter at the Swanscombe End turnstiles. Car-parking is available at Ebbsfleet International Station Car Park C for £3. Drivers are advised to avoid parking around the premises of local business and to avoid leaving cars on the Thames Way clearway near the roundabout as that runs the risk of being ticketed.

• Advance tickets for next week’s Emirates FA Cup match v Notts County will be on sale from the Main Reception at the Kuflink Stadium this Saturday.

Ed Miller has been Ebbsfleet United's communications manager and programme editor since 2014 and responsible for the club website since 2007. Contact him on ed.miller@eufc.co.uk
PrevPreviousHolmes has clean bill of health but the boss has the headache
NextKevin Watson appointed to manager’s jobNext