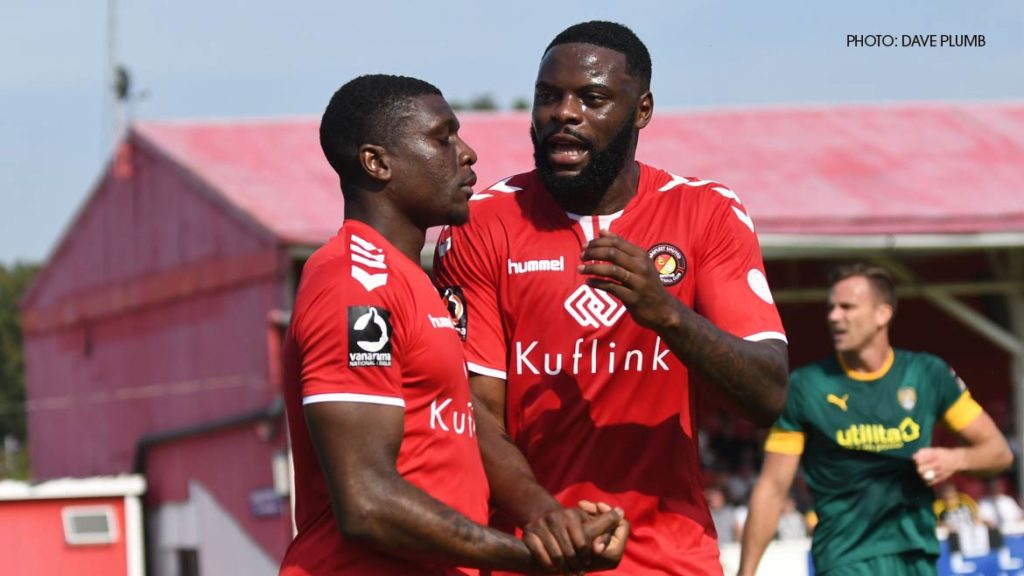 It’s doubtful whether the home faithful have greeted a point with such an outpouring of relief and joy but Fleet came from behind twice and scored twice for the first time this season to move off zero points.

And it was the least Garry Hill’s men deserved in a pulsating, blisteringly hot second half that showed fight, confidence and belief flowing through the home side after County had started the first half in a positive mood.

There was much chatter in the stands with the changes in the Fleet lineup, new signing Jordan Holmes replacing Nathan Ashmore in goal while Alex Lawless and Lawrie Wilson returned in place of Ayo Obileye and Gozie Ugwu.

Notts County were unchanged after an impressive 1-1 draw with Wrexham and their belief shone through in the way they began the match. Their pace out wide with Enzio Boldewijn plus Regan Booty and Kristian Dennis unsettling the Fleet back three had Garry Hill roaring at his defenders to maintain shape from the first minute.

Any nerves new goalkeeper Holmes might have felt were calmed when he held on to a third-minute Dennis shot well and Fleet had their own sight of goal minutes later. John Goddard found space down the left and floated a cross into the box where Wilson rose well, his header cleared from under the bar by Sam Graham before Josh Umerah could get anything on it.

County threatened again when Wes Thomas got round the back to send a cross skipping across goal but Holmes left that as it was overhit.

But the visitors took the lead on 11 minutes. Boldewijn was given room in which to attack down the right flank and he flung over a pacy high cross that Ben Turner attacked to power a header into the bottom corner from 12 yards.

Fleet responded well but couldn’t find a killer ball. Aswad Thomas hit an excellent 40-yard pass into the feet of Myles Weston but his cross was intercepted and Lawless then thundered a shot just over after Wilson’s initial effort was blocked.

The middle period of the half lacked creativity from both sides though Holmes had to be quick off his line to gather a Booty cross that was bound for the waiting Dennis.

Umerah broke with speed and strength on the half hour but Thomas couldn’t get a cross in from his pass and the Fleet full-back won a couple of corners in as many minutes as the home side tried to impose themselves.

Goalkeeper Sam Slocombe was finally made to work when he parried Umerah’s powerful effort and while he was forced to gather at the second attempt, there was no red shirt to pressure him.

With the first half deep into time added on, the referee allowed Fleet to take a free-kick and then a throw-in. That set piece was sent in long and dropped in the box, Umerah fighting off his marker to bundle it over the line as Slocombe flapped at it.

With that slice of good fortune, Fleet almost found a second straight from the kick-off in the second-half. Weston, playing against one of his former sides, raced down the left and his cross just evaded Umerah, falling for Wilson who forced Slocombe into a save with a shot towards the top corner.

But as against Yeovil, Fleet found themselves a goal down early on. That came in the 48th minute, with winger Boldewijn – quiet enough up to that point – showing a turn of pace down the right. Wes Thomas couldn’t get on to the cross but with Fleet worryingly light in the box, Booty was waiting at the far post to shoot past Holmes.

But credit to the Fleet, heads refused to bow and they came back fighting. There was a sticky period when frustrated by the referee’s decision-making, Hill received a yellow card and then Wes Thomas was put clean through on goal by a Boldewijn ball from midfield but he tried to be too clever and scoop it over Holmes who stood up well and made the save.

Referee Gary Parsons continued to frustrate the home side when Umerah’s shot seemed to hit a County hand inside the box.

But just as Hill had appealed for a bit of luck for his side, so he got it. On 61 minutes, with Fleet pressing and the ball inside the box, substitute Jim O’Brien misjudged an interception and it rolled past Slocombe for the equaliser.

The game could have gone either way, though Fleet finished the stronger and looked the fitter closing the match out. On 66 minutes, Umerah showed fantastic skill to wrong-foot Graham, cut back inside him and send over a cross that Goddard touched on to Weston for a corner.

Shields tried to unsettle his side of the County defence and Weston looked lively as he moved to a wide right position.

The Magpies weren’t without their chances, Dennis heading over and pantomime villain Wes Thomas wasteful with a shot from a good position. Ugwu had a powerful shot that rifled wide and Fleet continued the positive movement into time added on. Shields and Goddard combined to set up James Ball for a shot but that was blocked and Weston supplied Goddard on the opposite flank but he slipped and the shot went over the far upright.

The home fans roared their side on and greeted the point with ill-disguised glee. In other circumstances, there might have been disappointment that all three weren’t taken but this platform sends Hill’s side to Boreham Wood with a large slice of positivity.

Ed Miller has been Ebbsfleet United's communications manager and programme editor since 2014 and responsible for the club website since 2007. Contact him on ed.miller@eufc.co.uk
PrevPreviousA new home for Holmes
Next“We had to get some reward”Next

Versatile Rowan is most recent recruit

Are you flagging for the Fleet?

Taylor’s aim to switch success from amber to red

Versatile Rowan is most recent recruit

Are you flagging for the Fleet?