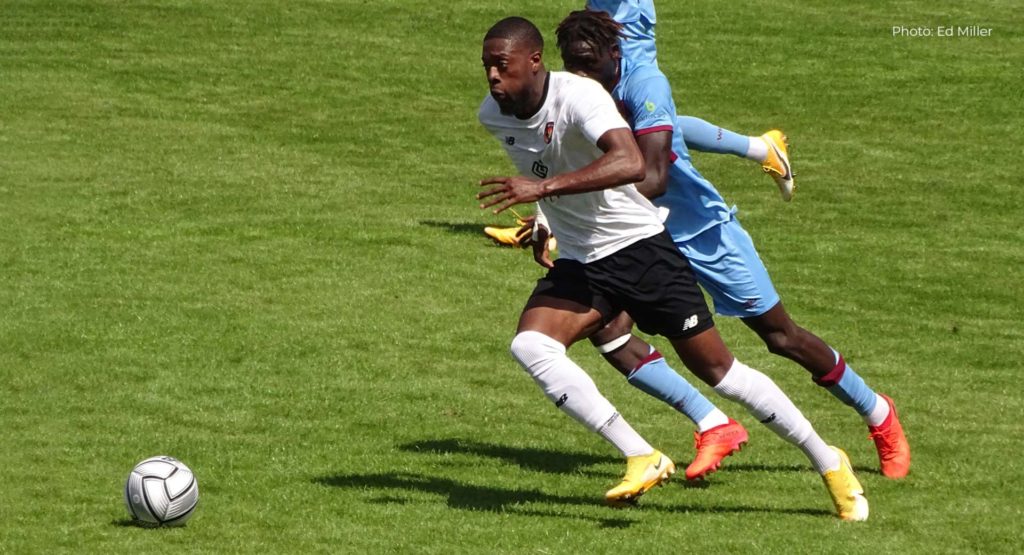 Fleet continue pre-season with their 100% record intact but perhaps more importantly for the watching throng, the manner of the win – with some superb, easy-on-the-eye football – was the main takeaway for fans after 504 days away from their spiritual home.

Elliott Romain won it late with an excellent run on goal, supplied by Dominic Poleon who had opened the scoring in the first half. And Dennis Kutrieb’s post-match assessment was one of delight that his side coped very well indeed and stuck to their gameplan against an exciting young West Ham team.

The Hammers arrived with a number of their most promising U23s in the squad, those players having been training and playing with the club’s first-team group of late. The starters included Pierre Ekwah and Thierry Nevers, both signed for fees from Chelsea and Reading respectively, as well hotshot Mipo Odubeko and Harrison Ashby, son of former Fleet assistant manager Barry.

Fleet didn’t seem too interested in conserving energy beneath the hot sun as they flew out of the traps, Lee Martin busy in the tackle and closing down and Craig Tanner making his runs and passes look effortless down the wing.

It was Martin who sniffed out the first opportunity on 12 minutes, showing great presence of mind to create an opening but seeing his shot deflected away by Jamal Baptiste. And the Fleet skipper was on it again four minutes later when Tobi Adebayo-Rowling’s searching cross was punched clear and Martin’s effort on target was again blocked.

The closest the home side came to a goal after a succession of neat approaches on goal was on 19 minutes, Rakish Bingham teasing the Hammers defence before supplying Poleon whose effort was charged down by Ossama Ashley. Having come so close, it seemed Poleon was just getting his range together as he found the net two minutes later. It came via a fine Tanner corner that arrowed towards the six-yard box for Poleon to head home from close range.

West Ham partly stemmed the Fleet tide though Kutrieb’s men continued to play some pleasing stuff – and on 33 minutes Bingham tested the trialist in goal with a firm effort from the edge of the box that the keeper needed two chances to make safe ahead of the No.9’s arrival to attempt to stab the rebound home.

Chris Haigh had a couple of loose balls to mop up in the first half but West Ham proved much more clinical straight after the break. Nathan Holland was quick on to an errant Fleet pass straight from kick-off and he gained ground smartly towards the edge of the box, firing an effort across Haigh and over the line.

Four minutes later and Fleet might have found themselves behind but had Kreshnic Krasniqi to thank as the Hammers’ neat build-up play switched sides. Thierry Nevers’ ball in towards Kamarai Swyer was hit past Haigh and on target but Krasniqi’s defending was superb as he sprinted into the six-yard box to clear off the line.

Both managers swapped half of each team in an hour-mark set of substitutions and it sent the initiative back a little more the Fleet’s way with Romain soon making his presence felt up front as Adam Mekki gave the visiting defenders no let up despite Greg Cundle’s departure from the field.

Both sides had chances, with Baptiste heading just wide and a couple more opportunities overrunning for West Ham. Alfie Egan got his head to a corner 20 minutes from time that bounced the wrong side of the upright while the lively Mekki combined well with Christian N’Guessan in an exquisite passing move to supply an opportunity that only just escaped Romain.

Ekwah sent a free-kick up and over the Fleet wall and just off target and his frustrations boiled over into occasional tetchiness as midfield tackles were firm but fair.

Fleet won it nine minutes from the end with a direct goal that belied the otherwise passing game that the manager has instilled in his men. It came from the boot of Haigh upfield with unerring accuracy, was well flicked on by the head of Poleon and Romain battled his way past his marker, zoned in on goal and struck a cool, clinical effort past the goalkeeper.

It’s 15 goals and three wins now since fans returned to cheer their side and it seems this Fleet team are revelling in the attention once more. Long may it continue and your next chance to see that happen is Tuesday night’s home game v Colchester United – get your match tickets here.

Ed Miller has been Ebbsfleet United's communications manager and programme editor since 2014 and responsible for the club website since 2007. Contact him on ed.miller@eufc.co.uk
PrevPreviousYour complimentary online programme… + KO delay until 2.15pm
NextFleet boss praises matchwinner as fans returnNext