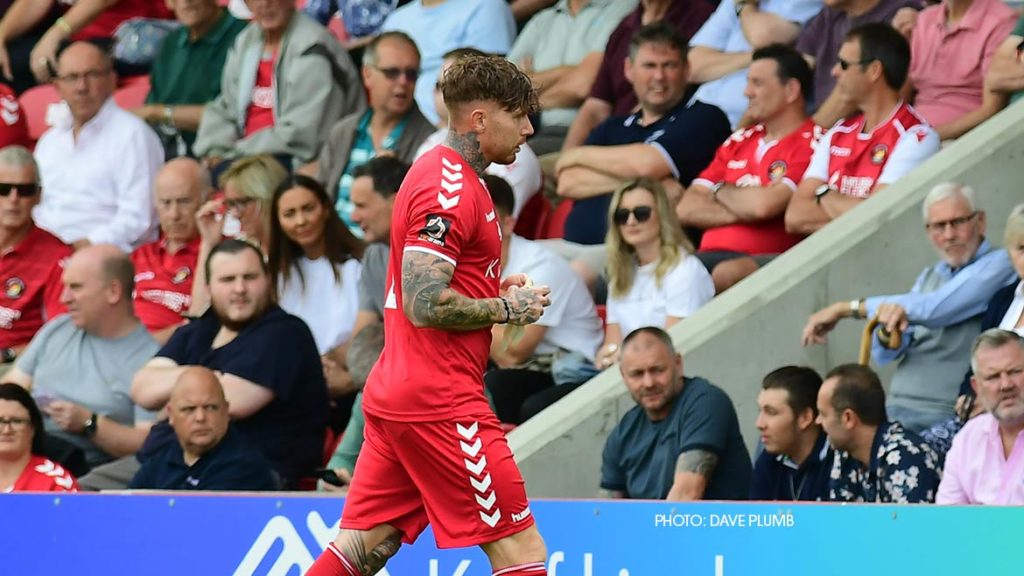 It’s been 14 years since the Shaymen won their only game at the Fleet and they did so on that occasion by three goals as well. This time, they took full advantage of Fleet’s self-inflicted nightmare opening spell and with 10 men for the best part of 80 minutes, the home side were always up against it.

Garry Hill started Gozie Ugwu on his own up front, with Josh Umerah on the bench, and no fewer than six players making their debut. Halifax, too, had a number of debutants, with three of their most recent signings from this week in their eleven.

Fleet got the first sniff of goal from the left flank on two minutes, John Goddard’s accurate cross lifted into the box but cleared hastily behind by Nathan Clarke for a corner.

From the corner, Jack King hooked a free ball back into the danger area and Gozie Ugwu wasn’t far away from it.

But that was as good as it got for the Fleet. On eight minutes, Aswad Thomas was caught in possession and Cameron King released Tobi Sho-Silva through the middle. He accelerated through two Fleet defenders, Jack King clipped him as he went one on one on goal and referee Mr Marshall brandished a straight red card.

Fleet really needed to keep it tight for a spell and Nathan Ashmore got down low to a free-kick that was on target. But two minutes later, Cameron King’s routine shot looked to be heading for the Fleet goalkeeper’s arms but he let it squirm out of his grasp and in it went.

A nervous home side tried to rally, Ugwu creating a chance through strength alone and sending a powerful dipping effort just over.

But the rest of the half was easy for the visitors as Fleet had 10 men in their own half, giving the Halifax back line time to stroke the ball around the centre circle in search of an opening.

James Ball had slotted into the back four and Alex Lawless was having to work very hard in a midfield a man down, which hardly helped the home side’s cause.

The influential Cameron King was unfortunate not to make it 2-0 on 18 minutes when Ashmore dribbled his way out of trouble but his clearance landed at the Halifax midfielder’s feet and he curled an effort just past the upright.

He had a third effort on the half-hour that Ashmore parried and Danny Williams went tumbling in the box as Fleet made an untidy clearance. Sho-Silva was also making a nuisance of himself and Jamie Grimes had to keep his concentration to keep the former Dover man under wraps.

But out of the blue, Fleet were back in it. Ugwu, manhandled for most of the 90 minutes, shrugged off his marker and managed to divert a ball into Goddard’s path. He swept into the box and volleyed a shot out of Sam Johnson’s reach and into the corner.

Fleet began the second half on the back foot but looked more steady and gradually forced the issue, looking the better side for a spell midway through the half.

Goddard made Johnson work at last when he took down a ball into the box and forced the Halifax keeper off his line to gather.

Cameron King then went to ground for little reason and remained prone, Fleet rather sportingly playing the ball out despite their manager exhorting them to attack.

That signalled a decent spell of play around the hour mark, with Fleet finally finding some width and Ugwu’s strength unsettling the away defence. Myles Weston showed some determination to unsettle Jerome Binnom-Williams and the home crowd responded by raising the noise levels.

But Halifax’s attacking substitutions changed the game. Despite Fleet’s improvement, they were always vulnerable to the visitors’ extra man. On 69 minutes, Binnom-Williams built down the left and cut a ball back to Niall Maher outside the box and he spotted a gap that he exploited perfectly with a fine shot to make it 2-1.

If that rather knocked out the home side’s stuffing, the next goal seemed a rather cruel blow and it took just two minutes more. This time it came from the opposite flank, substitute Jamie Allen beating Lawless for pace from the right and crossing for fellow sub Jack Earing to eventually fire home from close range with Ashmore grounded.

Hill threw on Umerah, Sean Shields and Alfie Egan and the latter was most unfortunate not to score on his debut. That came on 81 minutes, Ball’s short pass on the edge of the box sitting up and Egan running on to it to despatch an excellent low drive through a crowd that was heading in at the near post until Johnson got down ever so well to turn it away.

Fleet’s afternoon got worse in time added on. With home fans up in arms about the award of a free-kick, their complaints stuck in their throats when Clarke hoisted the set piece from his own half high towards the Fleet goal and it cleared Ashmore, off his line, to drop under the bar.

That rather summed up this season’s opening day.

Ed Miller has been Ebbsfleet United's communications manager and programme editor since 2014 and responsible for the club website since 2007. Contact him on ed.miller@eufc.co.uk
PrevPreviousOn your marks…
NextHill: “I hope we go home hurting – and respond”Next