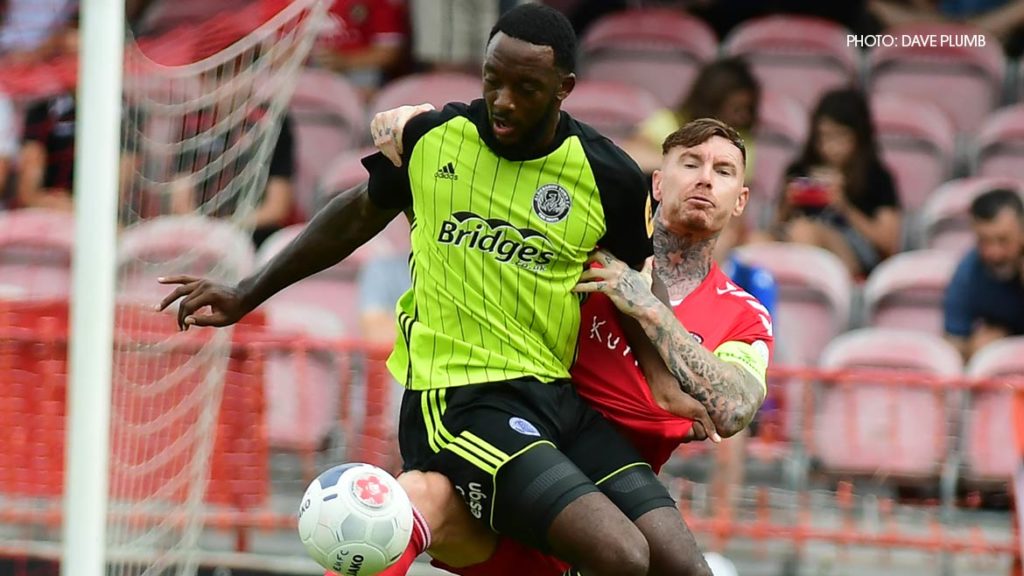 Garry Hill will have his players in for training this Sunday, saying they didn’t earn a day off having not turned up against fellow strugglers Aldershot.

Optimism was high after last weekend and with the news that two new signings were on the bench, home fans were looking for their side to build.

There were two changes with Bondz N’Gala and Alex Lawless coming in for Ayo Obileye and Frankie Sutherland while the Shots were able to welcome back skipper Dean Rance for his return to the Kuflink Stadium.

Fleet’s afternoon was summed up inside the first two minutes when the Shots forced a corner and two free-kicks and the home side were increasingly guilty of loose possession and the giving away of set pieces.

Ugwu had a couple of headers in the early stages but had Aldershot’s finishing been better, they would have been ahead in the opening quarter hour. Shamir Mullings got away to release Connor Shields down the right and his cross whipped across the six-yard box and away before Aaron Eyoma could reach it.

Alex Lawless was yellow-carded for a kick to the back of Alfy Whittingham’s legs as frustration was the name of the game in midfield. Shots came again on 22 minutes and Ethan Chislett had only Holmes to beat as he wriggled free but an excellent tackle from N’Gala denied him.

Mullings had another opening on the half-hour as he snuck behind the Fleet line, chested the ball down and turned to shoot but it ballooned over the bar. Five minutes later, Shields got another cross into the Fleet box, his high delivery to the far post met by Mullings whose effort would have hit the target but came back off his own teammate, Eyoma. That came moments after another corner was surrendered cheaply by a mix-up in defence.

At the other end, there was little to trouble Walker. Wilson’s effort from distance was well hit but curled away and Josh Umerah played in former Shot John Goddard but his effort was easy for the goalkeeper.

It took Fleet 43 minutes to win a corner – and Aldershot scored from it! On the counterattack, Shields managed to hold off the considerable attentions of Ugwu to race upfield. His low cross was missed in the box, allowing Eyoma to run in and convert with ease.

It was a poor first-half but the response that was needed didn’t arrive after the break. And within four minutes, Aldershot had the chance to extend their lead when Shields got past Wilson on the byline and was sent to ground by N’Gala.

The Shots man picked himself up to take the resulting penalty but Holmes dived low to his right to push it away.

That should have provoked the home side into some form of action. But it didn’t. Sutherland and Reid came on for the booked pair of Lawless and Umerah and the new boy almost carved the visitors open when he embarked on a run through defence but as Ugwu moved in on the ball, Lewis Kinsella made a fine tackle.

Fleet have been criticised for conceding cheap goals this season and few will have come as cheaply as Aldershot’s second. That arrived on 59 minutes when a long ball bounced for Grimes to clear. He failed to control it and Shields robbed him of the ball, poking it wide of Holmes to where Chislett was able to stroke home.

Wilson fired over in response and there were one or two penalty shouts as Blackpool referee Elliott Swallow added to home fans’ frustrations.

He issued a yellow card to Whittingham on 74 minutes after the Shots player went in with both feet on King, a challenge that provoked Grimes, Mullings and several others to square up. Grimes also received a yellow and Ian Hendon was then red-carded on the Fleet bench, though it wasn’t immediately apparent what the assistant manager did to warrant it.

That seemed to add some fire to the Fleet’s belly. Substitute Biabi did well to slip a cross into the six-yard box but it had nobody on the end of it, while Wilson was in space for a header that Walker did well to divert. His opposite number then had to deny Mullings with an excellent save as the former Maidstone man eyed up the corner of the goal.

Fleet gave themselves a lifeline on 82 minutes. Some good approach play was cleared out of the box by Aldershot as far as King who fizzed a low shot through a crowd. It fell kindly for Ugwu who was able to fire past Walker for his second goal of the season.

That was the best spell of the game for the Fleet, with Reid and Biabi lively. Weston’s cross for Ball near the end should have yielded more than the off-target effort that resulted.

Aldershot succeeded in winding the clock down and Fleet had nothing more to test them with in a performance that will need exorcising before the trip to Crabble on Tuesday night.

Ed Miller has been Ebbsfleet United's communications manager and programme editor since 2014 and responsible for the club website since 2007. Contact him on ed.miller@eufc.co.uk
PrevPreviousTwo new signings for the Fleet
NextPerformance far below where it should be, says bossNext